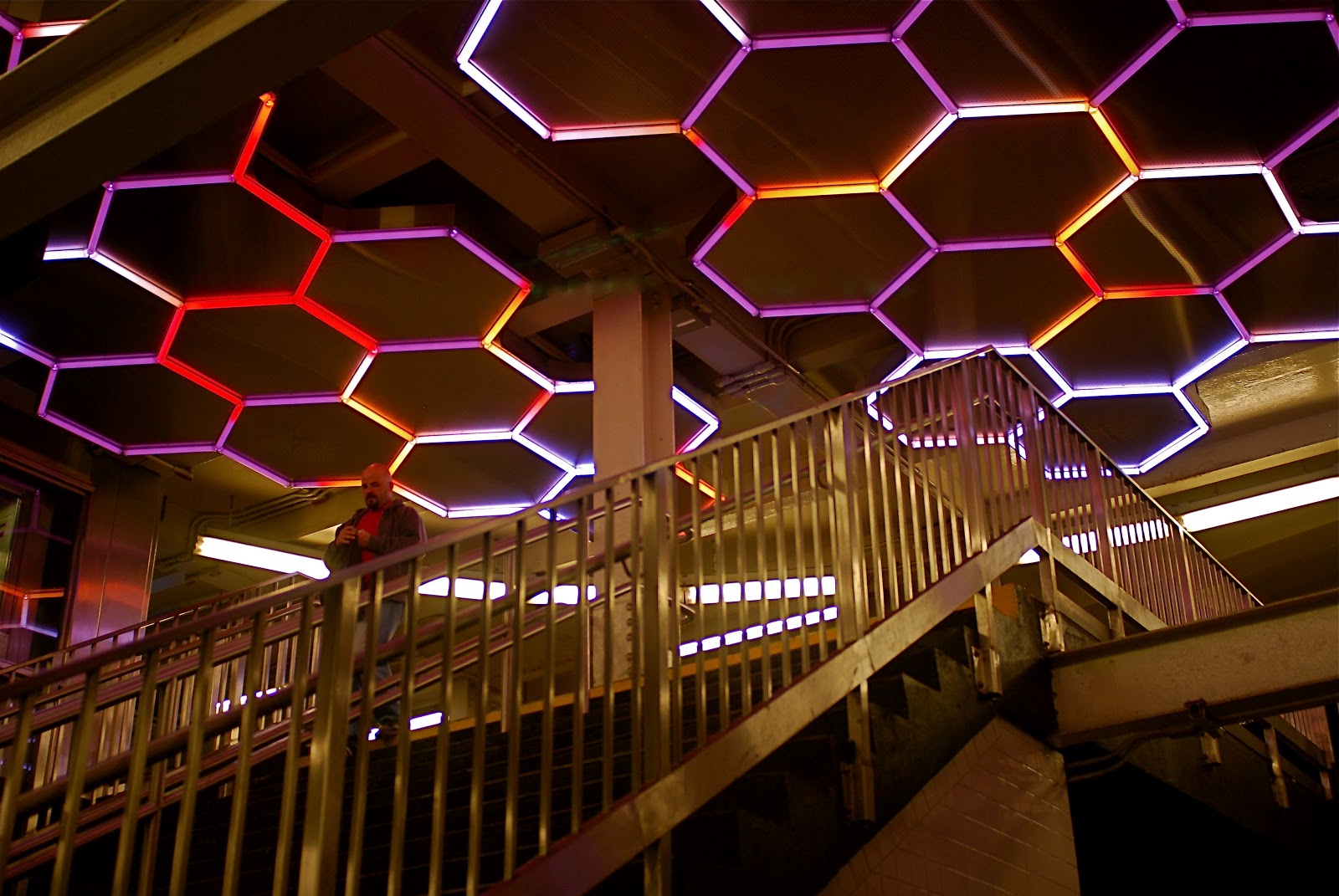 Hive, by Leo Villareal, is a piece commissioned by the MTA in 2012 that illuminates the otherwise bleak, dingy ceiling of the Bleecker Street station. The piece is made of aluminum, stainless steel, and LED tubing that constantly morphs in and out of colors and gradients throughout the day. When I used to work in the East Village I would get off the B train at Broadway Lafayette, using a different exit than the Bleecker Street exit. One day the stairs to the Houston exit were particularly unappealing and tired legs motivated me to take the escalator up to the Bleecker Street exit. As I ascended the uphill conveyor belt, lights started peeking out from the ceiling and soon I had my phone in hand, trying to quickly and inconspicuously capture the slithering colors in the hexagonal maze without looking like a tourist. Since that day I have succumbed to the escalator of Bleecker Street, perhaps out of laziness, but definitely out of a desire to see what colors the station would display that day. Walking through a train station becomes second nature to a New Yorker who relies on the MTA for their primary mode of transportation, eventually the rats and the screaming people don’t phase you. The Hive on Bleecker Street is a piece, of an otherwise normal train station, that will always capture my attention until I go up the steps into the (almost) fresh air of the city streets.

The placement of the Hive in a public setting where hundreds of New Yorkers who are strangers to each other pass by every day makes it a piece that mimics the nature of the subway- in essence we are all busy bees in the bustling hive of New York City, creating honey for our families, communities, and economies. The Hive establishes a communal bond and makes other New Yorkers somewhat less strangers as we can walk through the station and appreciate the piece together. Whoever regularly uses the Bleecker Street station automatically has a constant in their commute- the art piece- though the colors are always changing and never constant. It is a piece that distracts from the drab subway system, offering color, brightness, and change in an area that does not get much love from its users and is always modestly the same with its tiled walls and grey cement flooring. Though our Queen Bee, Andrew Cuomo, can’t seem to allocate enough resources and distribute those resources efficiently within the MTA to get the trains working on weekends and the delays less frequent, we are all reminded by the Hive that we are honey bees who collectively resent the MTA and just want the R train to work faster than the pace that we make honey at. On the side of a building, perfectly in view of the entirety of an intersection between Avenue S and East 36th street, […]