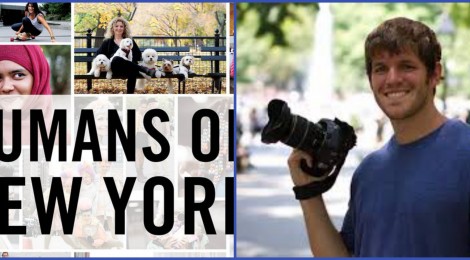 Humans of New York: Humanity at its Best

Have you ever looked at a picture and watched it come alive?

Brandon Stanton is the photographer of the renowned blog Humans of New York, also known as HONY, which features New Yorkers in the midst of their everyday lives. Brandon travels all over the city to take these artistic street portraits. Thus far he has taken over 5,000 portraits.

Brandon created the blog in 2010 after he arrived in New York City following his departure from bonds trading in Chicago. Brandon initially set out to photograph 10,000 New Yorkers, but soon HONY became much more than just that. He not only takes pictures, but has also started collecting quotes and short stories from his subjects. Now, after just three years, HONY has become a vibrant blog on Facebook and Tumblr with over one million followers worldwide.

It’s amazing to see what pictures Brandon takes and the quotes or anecdotes that come with them. It is very admirable how he captures the city from its demographic diversity to its daily street fashion. There is so much beauty and hardship in this city. Without HONY I’d would never have opened up my eyes to see all the types of people that New York really holds. Brandon has a remarkable way of capturing people’s troubles, inner desires, and happiness.

I love that Brandon is a self-taught photographer but he has still been able to make his photography so strong and so powerful. There is more emphasis on the person or people being photographed rather than on the artistic composition. The focus is completely drawn onto the person and the “raw” emotions that are portrayed.

Those that we look down at sometimes, without thinking for a second who they are or what they are all about, are actually people with real stories to share. Everyday, 50,000 people look at the HONY pictures. I love the comments people make as well. Every post gets thousands and thousands of comments daily. They open my eyes up even more to view people’s stories in a different light.

HONY is proof that humanity still exists. My favorite example of this is when Brandon revealed the story of six-year-old Rumi and his mother. They were at Washington Square Park selling cowboy gear so that he could save up enough money to buy a horse. Brandon took action immediately by setting up a plan to send Rumi to a Wild West Adventure. His goal was $7,000 for this all expenses paid trip. He posted his idea on Facebook and within just fifteen minutes he had more than enough to cover the trip. By the end of the night, HONY had collected $32,167. The extra money went out to a program that provides riding lessons for children with disabilities. How amazing is that!

There is just so much awe in this whole situation. Rumi’s mother is an incredible person for offering her time, love, and support for her son. The fact that Brandon went out of his way to make this boy’s dream come true is nothing short of wonderful. The way people stopped to look at Stanton’s post and actually respond by taking money out of their own pockets is just as amazing. This one post and one action with the help of so many people show the kindness and generosity of the human spirit, as well as that of HONY.

Every day I look forward to seeing more of HONY’s work on the blog. It brings out a range of emotions from sadness to anger to joy to laughter. I feel HUMAN. A picture can be worth a thousand words; HONY brings all these pictures to life.