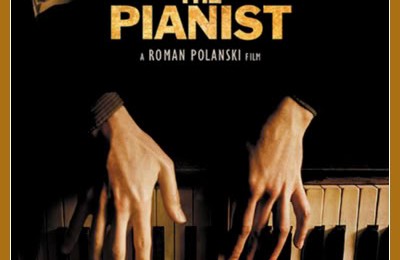 If the most touching, heart-wrenching films of the 21st century so far were to be ranked on a top ten list, The Pianist would be a worthy candidate. This 2002 gem, directed by Roman Polanski, follows the story of Wladyslaw Szpilman (Adrian Brody). A musically gifted Polish man from a wealthy family, Spzilman works as a pianist in Warsaw. That is, until the Germans invade his beloved country in 1939 and set fire to everything that Szpilman holds dear. The Pianist is a masterpiece that pulls you into its emotional depth and doesn’t let go.

It all begins with a melody. A Chopin piece begins to play while Holocaust photographs flicker past the screen slideshow-style. The camera focuses on a pair of hands playing piano, and it travels upwards to reveal the somber Wladyslaw Szpilman, a pale-faced man that seems to be immersed in the song. From the very first minute of the movie, the connection is made between title and film. It is already evident that the piano will be a major focus of The Pianist, and it certainly is.

Szpilman is a kind of celebrity in his town; he has many friends that admire his talents. He lives with his sisters Halina and Regina (Jessica Kate Meyer and Julia Reyner), as well as with his parents (Maureen Lipman and Frank Finlay). The family is aware that Hitler is planning on invading Poland soon, but they don’t take heed of the radio’s omens and carry on living. On a dreary day, the Germans come. The Szpilmans are cruelly shoved into train cars destined for concentration camps, but not Wladyslaw. He is helped by a soldier friend to escape. Thus, Szpilman begins a fight to survive the war with only sheer determination and music to keep him going.

A little background information: the director and writer of the movie were both victimized by the Holocaust. Polanski lived in Warsaw until the Germans came and tore his family apart; both parents were sent to concentration camps, but Polanski was able to escape the ghetto in which they had been confined to. Successfully escaping and surviving the war inspired his film career. A surprising other thing to note is that Wladyslaw Szpilman himself – the man that inspired Polanski – contributed to the film by helping with the script.

The Pianist also happens to be the highlight of Adrien Brody’s career. His Szpilman is quiet yet enigmatic. Emotion seeps into every aspect of his performance, from the way he plays piano to the way he collapses in tears after witnessing the bloody remains of his town. Brody put every effort into this film; it took true dedication to study piano for several months in preparation for his role. Majority of the piano playing seen in The Pianist is done by Brody himself. It is no surprise that Brody won the 2003 Oscar Award for Best Actor in a Leading Role for his performance in The Pianist.

Meanwhile, Roman Polanski captures everything that Brody offers as an actor with a directing style that perfectly suits the film’s mood. He makes use of dim lighting for most of the film in order to highlight the impending doom.  He lends the viewer Szpilman’s perspective by following behind Brody whenever he investigates an abandoned location and makes sure to linger on Brody’s face when he is shocked or scared. He lets Szpilman’s piano playing become the soundtrack, giving the music a life of its own in the film. Polanski’s skill with the camera makes a dynamic team when combined with Brody’s rendition of Szpilman.

The Pianist explores themes of determination, the horrors of the Holocaust, and the life-saving powers of music. Szpilman managed to keep himself sane during weeks of solitude by imagining music and “playing” with his fingers on an imaginary keyboard. Death and misery surrounded him, yet the piano allowed him to step away from it all.

The Pianist takes its audience on an emotional rollercoaster so unsettling that it’s hard to believe that it’s based off a true story. The cast and crew did a terrific job at solidifying Wladyslaw Szpilman’s experience in the Holocaust. Everything from the film’s technical elements to the actors’ performances is top-notch. To all that seek a film to remember, look no further than The Pianist.