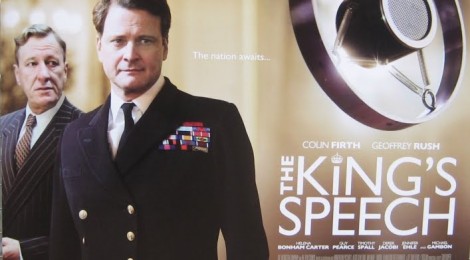 In The King’s Speech, Albert (Colin Firth) battles a speech impediment made much worse by public attention. In one of many efforts to overcome his problem, he chokes upon a mouthful of marbles. When he storms out of the room, angry and embarrassed at his failure, his wife (Helena Bonham Carter) thanks his speech therapist, telling him his services will no longer be needed. This scene exemplifies Albert’s self-hatred, his relationship with his wife, and their growing distrust and frustration with therapy at the beginning of the film. The rather ominous opening shot of a microphone provides the first glimpse into the Duke of York, or Albert’s, anxiety over his pained speaking ability. The shot is filmed from a low angle, making the microphone appear to fill the entire room, just as Albert’s stutter occupies his mind. The King’s Speech begins in 1925, and Albert is still the Duke of York, not yet King George VI. However this is a position that requires a great deal of public appearances and speech making.

Albert reluctantly gives therapy one last shot, going to see Lionel Logue (Geoffrey Rush) a non-accredited but hugely successful speech doctor. His methods are infallible, as is shown when Albert speaks while listening to music. The music muffles the sound of his voice, and so he is able to speak perfectly. Even as Albert’s speech improves, he is still plagued with self-doubt. Firth and Bonham Carter do an excellent job portraying a married couple dealing with a disability. Albert is scared, and his wife is scared for him; she tries to protect him from having to speak and from feeling even more anxious. When the Duke’s daughters ask him to tell them a bedtime story, he is obviously flustered and both he and his wife seem reluctant to agree.

The details throughout the movie greatly add to its realistic feel. The TV in the background of Lionel’s living room can be heard talking about the “royal drama,” providing Lionel with a hint that the Duke may quickly ascend to the throne.

Gradually, Lionel and Albert form a reluctant friendship that is often punctuated by outbursts of fear and frustration. In the church scene, Albert yells “I do have a voice!” and Lionel responds, “Yes, you do.” This exchange provides a moment of resolution for the audience, for it shows that Albert finally believes in his own power—Lionel is succeeding at helping Albert become worthy of his kingdom.

They watch a reel depicting Hitler: the year is 1939. Even as Albert fears the threat of the Germans and of falling into another world war, he is in awe of Hitler’s ability to speak. He commands his audience, stealing their breath with his charisma. This scene is particularly powerful for the audience knows already what horrors Hitler will accomplish over the next few years in Europe. He is an irrefutably strong leader, and much of his power is derived from his speech making. It is shocking to see Hitler inspire the King of England, yet this inspiration leads Albert to becoming a strong leader. As World War II begins, Albert, now King George VI, must deliver a speech. This scene parallels the beginning of the movie: the room, empty but for a microphone, the reminder that “the light will blink three times” before he should start speaking. Yet this time Albert has Lionel there to remind him of their sessions and to reassure him of his abilities. As Albert begins to speak, shakily at first, he catches Lionel’s gaze. Even while a nation is shown rapt to his words, listening from city centers and living room couches, there is a feeling that the speech is just between Albert and Lionel. The intense intimacy of this moment is reinforced by the music. The cadence of both the speech and the music grows stronger as Albert becomes more confident in his voice. Yet the music’s forward motion also leads to the idea that this speech is just the first of many for King George VI.

The King’s Speech is a film which everyone–history buff or not—should watch. At times it is sad, almost heartbreaking, and at other times it is amusing and touching. It illustrates one man’s struggle, and how he grew into a true monarch, but this movie is one that each of us can relate to. Not everyone must speak to an audience of millions, but we all have fears to conquer and struggles to overcome.