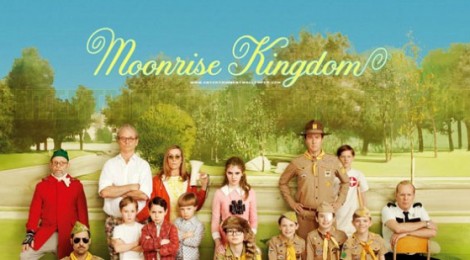 Young love is a precious thing and it’s even cuter when you watch it from the outside. There’s something about the innocence and naiveté that draws people in to watch it. Moonrise Kingdom (2012) is a warm, feel-good film starring two adorable kids, Jared Gilman and Kara Hayward, and directed by Wes Anderson, popular director of films that have extraordinary stories with common themes.

Moonrise Kingdom is about two preteen outcasts, Sam Shakusky and Suzy Bishop, who meet, become penpals, fall in love, and then decide to flee away from their families and homes. Sam is an introverted, intelligent Khaki scout at Camp Ivanhoe and Suzy is a young schoolgirl who adores looking through binoculars and reading adventure books unlike the rest of the girls in her hometown. They plan to run away to a secluded cove on the island of New Penzance, where they live. At the moment when Sam’s Khaki Scout troop leader, his fellow Khaki Scouts, and Suzy’s parents realize that they are gone, they immediately start searching around the entire island for them. Over the course of the escape, Sam and Suzy’s relationship develop. They learn more about each other, discussing “adult” topics like family issues and doing “adult” things like kissing and dancing to music. All seems well between Sam and Suzy, but panic is strong among the search party, especially when there is a huge hurricane approaching the island.

Sam is a very peculiar boy, especially to the other Khaki scouts. He is an orphan and spent his summer at Camp Ivanhoe to become a Khaki Scout. He is a small boy compared to the other boys and wears oversized glasses. Even though he is one of the best campers, he never seems to fit in with the rest of the boys. When he meets with Suzy, he arrives with a huge backpack full of camping materials and a smoking pipe. He is a very intelligent and confident boy, but not the brightest in terms of social interactions. He is awkward in serious discussions and makes remarks that cause the audience to chuckle at his odd personality.

Moonrise Kingdom also stars some other major actors, such as Bruce Willis, Bill Murray, and Edward Norton. Bruce Willis plays Captain Sharp, persistently fulfilling his duty as the town’s sheriff. Bill Murray plays Mr. Bishop, Suzy’s wine-drinking father who just wants his daughter back home. Edward Norton plays Scout Master Ward, the moronic scout master who obviously cares very much for his scouts and regards being Scout Master at Camp Ivanhoe as his real job. They all are loving characters who are very concerned for Sam and Suzy and try their hardest to find them before the storm hits the island. Each of the actors portrays their corresponding characters so well because they are able to captivate the audience into rooting for them to find the two kids as well. They never give up and this rubs off onto the audience.

One aspect of the film that I found was particularly notable was the music. All throughout the film, I couldn’t help but notice how well the music fit the situations and explained the type of mood for the scenes. It was mostly a folk style of music and some classical music, with a lot of percussion instruments to accentuate the quirkiness of the movie. It especially made the scenes with Sam and Suzy on their journey more lighthearted and cute. In other scenes, there was what sounded like a children’s choir, singing many kinds of melodies. I loved the way the music was crafted and how it could gloriously liven up even the simplest scenes of landscapes.

There were very few special effects used. In certain scenes, it was very obvious that additional editing was used in order to make the scenes more dramatic, but it did not hinder the overall feeling of the film. It was mostly just a camera, panning over all the characters involved, or close-ups of specific characters to see the bare emotions on their faces during certain events. The lack of special effects helped to contribute to Wes Anderson’s intention of simplicity and intimacy in the film.

All in all, I would definitely recommend Moonrise Kingdom, especially to those who have a soft spot in their heart for young kids, like me. We get to see the imaginative and childish actions from Sam and Suzy and they can’t help but put a smile on our faces or make us laugh. Though the plot was unrealistic and the theme of young love is usually an overlooked one, Wes Anderson is able to make the film so simple and delightful so that audiences of any age could understand and enjoy it.