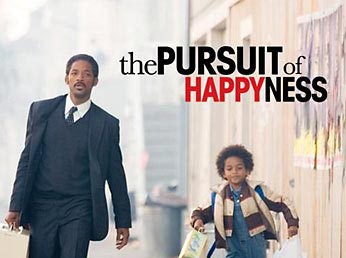 “Let me ask you something: Are you happy? Because I’m happy, and you’re happy, and that’s a good thing.”

With nothing else to say to son, Christopher Gardner stares into the dark brown eyes of his younger self, desperate to assure him that everything’s all right. Kneeling on the sidewalk floor to adjust to his son’s height, Gardner ignores the bustling of San Francisco around him and focuses on the only important person in his life. But, the little, fidgety boy simply shrugs his multicolored book bag on his back and draws his attention to the sidewalk next to him, unaware of the trouble that burdens them.

Released in theaters in the year of 2006, Pursuit of Happyness evoked an enormously positive response from its viewers. Gabriele Muccino, the director of this film, ingeniously chose real-life father and son Will and Jayden Smith to play Christopher Gardner and his five-year-old son, Christopher Jr. Based on a true story, this movie focuses on the life of a struggling salesman who loses his wife, home, and seemingly his dignity as he strains to make a living for his family. Unable to successfully sell bone density scanners that he has invested his entire savings on, Christopher Gardner experiences utter desperation and insecurity as he faces poverty and the debilitating pressures of an unstable business field.

Relentless. Hopeful. Resilient. Christopher Gardner, in encompassing all three of these traits, finds himself embarking upon a period in his life when everything seems to disintegrate. Even with the purest and best of intentions, Gardner is still unable to patch up his relationship with his exasperated wife and cannot eschew the horror of an eviction. Unfortunate circumstances humble him to the point that all he can do is just release his helpless emotions in tears and shrieks of anguish. But as he lies exhausted on the floor of a subway bathroom or as he rushes to take a place in line to a local homeless shelter, Gardner never surrenders his will, knowing that his son is watching his every footstep.

Of the many admirable aspects of this The Pursuit of Happyness, it is Will Smith’s nearly flawless ability to induce a strong sense of empathy in the audience that elevates this film to a masterpiece. From the very beginning of the movie, Smith is able to convey both pure bliss and heartbrokenness through his intense, earnest body language. His lengthy moments of silence bring about such a strong sense of realism, indicating the frustration and confusion humans constantly encounter when they do not know where their future lies. But, as a dichotomy to this merely-existing manner of living, the childlike and playful relationship between Gardner (played by Will Smith) and his only son revitalizes a life that seems to crumble. In these moments wherein the father praises, scolds, nurtures, and ultimately loves his child, the audience realizes that this is the only reason why Gardner does not give up. He chooses to live for that which gives him life.

The title of this film itself gives a lot of meaning to the plot and theme. Painted on the walls outside a day care, “happyness” allows the audience to understand that happiness has no limitations—no set formula. Even the impoverished and the uneducated, such as the owners of the day care, can reach and attain this ultimate destination.

Since this movie tackles a broad range of serious issues such as poverty, family struggles, and much more, it is recommended that only teenagers and ages above watch it. The depth and the scariness of the scenes that occur in the film are not suitable for little eyes to see because without a proper understanding, much of it can seem scarring and confusing. But for those above the age of thirteen, this movie is highly recommended because it both enlightens and inspires with a unique, noteworthy testimony. There are many quotes in this film that take on the form of life lesson. Unlike movies that are simply produced for humor or to cause adrenaline-rushing fear, The Pursuit of Happyness lingers in the hearts of the viewers, embedding a “feel good” sensation in the end.