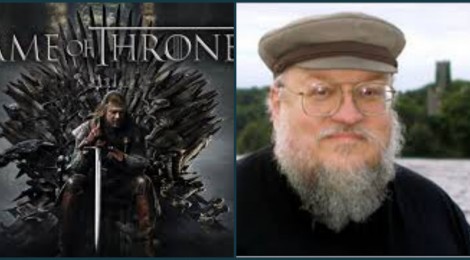 A Must-Read: Game of Thrones

Think of the word “epic”. Take that, multiply it by around 835 pages, and you get George R.R. Martin’s Game of Thrones. The first book of the A Song of Ice and Fire series was published in 1996 and already has four successors (two more are in the works right now). It has won numerous awards, such as the esteemed Hugo, World Fantasy, and Nebula recognitions. It is arguably one of the best fantasy/political strategy book series ever written. How? George R.R. Martin has created a literary world that is so expansive and intricate that one can’t help but to fall into its depths. Game of Thrones is called so because the central themes are power and betrayal between the elite families of the land called Westeros. These families belong to what Martin calls “Houses”; the two most distinguished ones in the first book are House Stark and House Baratheon. Martin separates chapters by switching points of view from one character to another, so one gets to have a perspective of the events in the book from the eyes of both the “good” and the “bad” characters. Nonetheless, book one sets the stage for a massive power struggle amongst the seven kingdoms in Westeros.

The first book of the series begins with Eddard Stark (the Lord of the Winterfell castle in the north of Westeros) having to execute an outlaw. Right off the bat, there’s a sense of subtle morbidity that lets one know that this book will not be for the lighthearted. Eddard’s long-term pal happens to be the king of the realm, Robert Baratheon. One fateful day, Robert and his entire entourage (including his beautiful queen, Cersei of House Lannister) come to whisk Eddard away so that he could become Robert’s closest adviser, which is a huge honor that is impossible to reject. Eddard’s wife Catelyn is worried that his life would be endangered in Robert’s palace, but he agrees to go and takes his daughters Sansa and Arya with him (Sansa is engaged to Robert’s son, Joffrey). From there, all hell breaks loose. The Stark family is slowly scattered throughout the realm, the Houses start planning and executing assassinations, incestuous relationships are revealed, and one’s favorite characters fall to their untimely deaths. Needless to say, by the end of book one of Game of Thrones, I was absolutely dumbfounded. Sometimes it’s easy to foresee what will happen in a book and who will live/emerge victorious, but this book takes any predictions one makes, ridicules them, and turns them upside-down. There is some serious counter-psychology going on here.

The Game of Thrones characters are completely believable and one will find himself relating to them despite the fact that the series is set in a sort of medieval era (there are no dates given). One grows along with the characters, and is with them every step of the way, such as through Sansa’s slow, sad realization that becoming Joffrey’s princess is not what she thought it would be. One is with them through lavish celebrations and horrific tragedies that you didn’t see coming. At first, it seems like the amount of names and people that Martin introduces is endless (and there are a LOT of them flung at the reader even in the first 100 pages). But for some reason, they’re not difficult to remember. Regardless of names, I found myself turning the pages excitedly, waiting to reach another one of my favorite characters’ point of view chapters.

Martin writes beautifully. He knows how to bring his characters to life and describe events with emotional depth that really brings out both the happiness and depression of them all. He knows exactly how to write to make his readers feel empathetic. Every chapter ends on either an interesting, provoking note or a cliffhanger, so one is practically forced to keep going. The thing is, you don’t need heaps of persuasion. Game of Thrones speaks for itself.

Currently, there are five books in total in the series. However, the first will always be the most memorable to me because it was the sweetest beginning to the mind-blowing roller coaster that is the next four books. I guarantee that the reader will find himself at a loss for words for some of the events that happen in the first book. It’s not surprising to me that an HBO television show was developed from this brilliant book series. George R.R. Martin has created a world that is as intricate as Harry Potter’s and characters whose stories are utterly enchanting. If you ever wonder what your next read should be, Game of Thrones is one definitely worth checking out.

← An Arts Festival Down Under the Manhattan Bridge Overpass
Dear Photograph →