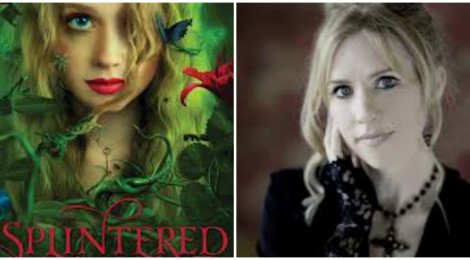 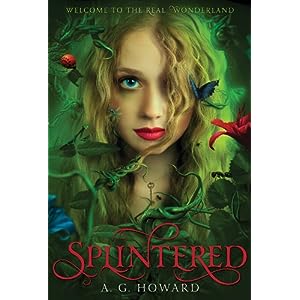 A.G. Howard’s debut novel Splintered is a dark urban spin-off of Lewis Carroll’s Alice’s Adventures in Wonderland. This striking, fantastical story is a combination of the aspects of Wonderland that Carroll created and the more grotesque and raw depictions of the truth behind Alice’s “adventures” that Howard explores.

Alyssa Gardner hears voices in her head. The flowers and the trees and the bugs talk to her. Even when she wishes they would be quiet, they are only silent once she’s ripped each flower from the root or stabbed each insect through the core with a pin. It’s the only way to get them to stop talking, so people don’t realize that she’s becoming exactly like her mother.

It was talking to the bugs and flowers that got Alyssa’s mother, Alison, locked up in the mental ward in the first place, and it seems that Alyssa is quickly finding her way down the same path. Her completely mental mother always told her it was the family curse that drove them insane; that it would come to get her once she reached puberty. Alyssa, of course, didn’t buy it. Only when her mother’s condition starts deteriorating does Alyssa begin to realize something is amiss. Alyssa is then forced into a new reality, where fiction is truth and fantasy is reality, and bugs talk and flowers gossip and she is the great-great-many greats descendant of the notable and non-fictional Alice Liddell.

Once Alyssa discovers that there is a way to break this curse, by entering Wonderland, she discovers that Wonderland is a place far more twisted and sinister than Carroll ever let on. In order to break the curse, she must pass a series of tests, “righting the old Alice’s wrongs” and only then could her bloodline be free of the curse.

Tagging along on this adventure is, of course, Alyssa’s secret heartthrob and best friend, Jeb, who unwittingly falls down the rabbit hole with her and refuses to climb back out without her. Also along for the ride is Alyssa’s forgotten childhood friend, Morpheus, a member and key player in Wonderland who has been around Alyssa her whole life even though she somehow had forgotten about him. While seemingly inclined to help Alyssa on her quest to break the Liddell curse, Morpheus also seems to have his own intentions, as do most of the key players in this novel.

Overall, this novel is a refreshing, real and stunning remodel of an old tale told in a newer day, exploring not only the fantastical world hidden in our deepest thoughts, but also the growth of Alyssa from a girl to a woman as she experiences first love, fear, courage, and a breakout for independence in a world where she has no one to trust but herself.

As an avid teen fantasy aficionado, I can vouch that this book deserves four stars. It hits all the marks that a good novel should hit while not being clichéd in the process. What makes this novel great is the originality behind it.

Of course, there have always been remakes. Retold stories in new forms, like Walt Disney’s cheerful twist on the Grimm fairy tales, or Shakespeare’s Romeo and Juliet, which is truly a retelling of the great and tragic love story of Pyramus and Thisbe told by Ovid in Ancient Rome. The way A.G. Howard approaches Lewis Carroll’s Alice is unique and unsettling in a way that makes you shiver while hurrying to flip to the next page for more. Howard is not cheerful or optimistic about the world she manufactures for Alyssa. It is real—for the most part—and filled with the real stresses of her life and her bouts of insanity. Some writers can’t seem to set the properly dark enough tone for their novels and they usually end up sounding unrealistic and too obviously manufactured. Even though these are words on a page and fictional story—for all we know—they don’t feel that way as they leap off the page to twine around the limbs and ears and eyes and throats of the readers and drag them deeper and deeper into Howard’s world, and Alyssa’s Wonderland.

Now, it comes as personal preference, but like most teen fiction authors, Howard writes from the perspective of the main character, Alyssa, and the reason she and most writers do this is to set the reader in the shoes of the character, have her empathizing with Alyssa, knowing her thoughts, knowing her actions, but not how they will affect those around her until it’s too late. Howard doesn’t flake on her character development, as do some lazy writers. She carves each person from a general mold into individual beings. Some characters, of course, fit into other identifiable molds. There’s the “stressed father”, the “bad boy”, the “good friend”. But, even in those criteria, Howard sets them apart, giving them each identifiable characteristics, differentiable personalities, which really add to the depth of the story. For example, describing Alyssa’s sick fascination with the insects who speak to her and her use of them as her artistic medium sets our main character immediately apart as not someone I could see as myself or the person next to me, but definitely someone who has her own story, a unique one, one that doesn’t quite fit the mold of a typical teen fiction novel.

And of course, there’s the romantic area of the novel. Now, this is probably the only reason this novel doesn’t get five stars from me. I can’t put all the blame on Howard. It is hard to tell a love story that’s been told a thousand times over and somehow find a way to be original in the process. I appreciate that the love isn’t unrealistic and immediate. Howard develops her characters and their relationships well, based on realistic scenarios and actual circumstances. She establishes natural attraction between Alyssa and Morpheus, but nowhere near enough to overpower the instinctive distrust she has for him, which is what realistically would happen in an uncommon relationship such as theirs. Everything in this novel is taken with time, even the fantastical aspects of it. With a few paragraphs, Howard can jump Alyssa from one trial to the next, but not without making you feel like you’d ridden through a roller coaster of emotions in the process.

Overall, this novel is definitely worth the read. Especially, but not particularly, if you are a teen fantasy fiction lover like myself. As a debut, A.G. Howard has blown me away. If this is her coming out novel, then her novels to follow will be sure to impress.

And just a fair warning if you’re thinking about picking up a copy of Splintered at your local B&N or library: the cliffhanger you’re going to be left on is worse than the ending of a Breaking Bad finale. Unhinged, Splintered #2 should be on shelves in early January, just prepare yourself to be ripping at your hair once you reach the end and realize you’ve still got months to go before you find out what happens next.