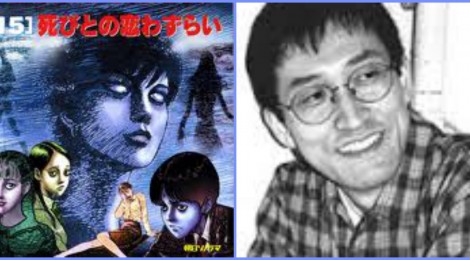 Leave it to Junji Ito to create another disturbing yet wonderful manga (Japanese graphic novel). Ito’s 2011 manga Lovesick Dead is an excellent work that almost rivals its predecessors Gyo, Uzumaki, and Flesh Colored Horror. The stylistic artwork displaying all the artistic talents Ito offers is only one of the reasons why this manga deserves to be praised. The ever age-appropriate content is filled to the brim with tension-inducing plot and the delivery is not too shabby either. Short and sweet, this comic carries enough punch to quench any craving for gut-wrenching stories. Speaking of unsettling things, Lovesick Dead is explicit enough to be kept away from children. However, for those who are looking for a real spine-chiller, this may not be the one. Perhaps it is because this deviates from the whole apocalypse formula, but Lovesick Dead does not quite cause the same levels of fear that, say, Uzumaki caused. Rest assured, there is enough bowel-releasing imagery to go around for those seven bucks the manga sells for. There are two self-immolation scenes and multiple neck-slitting scenes. For the fans of traditional ghosts, almost every other scene has creepy portraits of the pupil-less demon of the fortune-telling game.

No great manga is without great artwork. Ito’s Lovesick Dead is no exception. The backgrounds look as professional as professional gets. The attention to detail is impeccable. Closer examination of the housing and transit infrastructure reveals tight cross-hatching and realistic shading. Ito deserves some applause for his amazing ink-work. The figures are consistent—a rarity in the rushed world of manga publishing; and the bodily proportions are spot-on. And who can forget the characters’ facial expressions? Their gestures and emotions give them lives of their own and give a natural pace to the manga as a whole. The manga reads at a good pace that allows the reader to appreciate the artwork without feeling bogged-down by over-stimulus. Never do the scenes feel forced. Ito is one of the few manga artists who exhibits discipline when it comes to sticking with an art style. The uber-realism does a good job suspending disbelief while keeping the horror inside the pages.

Ito’s artwork is immediately recognizable for its mature style. The style endorsed is one of the more sophisticated ones in the vast sea of manga. Even though manga is marketed towards a younger demographic, Ito refines his art style to cater to a more experienced audience. Lovesick Dead does not try to be anything it is not. It does not try to be superficially beautiful or sophisticated; however, by not trying too hard, it does exactly that. Lovesick Dead is beautiful and meaningful in that puts forward is most straightforward qualities.

Lovesick Dead condenses a strong plot and strong aesthetics into a one-volume-work that can be completed in one sitting. One thing that is a bit irksome is the author’s less-than-subliminal messages that women are somehow weaker than men physically, emotionally, and psychologically. The cis-gender female characters in this work are the only ones affected by the main antagonist’s trauma-inducing words. Women are portrayed as dependent on men; and in some cases, they literally cannot live in the absence of men. One short story follows the events of a young woman whose love for a man is unrequited. Following the advice of the fortune-telling demon, the woman makes a plethora of unwise decisions: she her love interest’s child, tattoos her whole body, and sets fire to herself. Her love for this man so clouded her judgment that it ended up causing her untimely death. The author’s patronization of women, either intentional or unintentional, should be taken into consideration when reading Lovesick Dead. This is not to say that a work that pictures women as the weaker sex cannot also be good. The majority of media that is available for consumption illustrates women in a negative light, so—naturally—some of the gems will be contaminated. As much as the anti-feminist themes may deter readership, Ito’s previous and current works have such a strong foundation that these gross errors can almost be given less consideration. Overall, the manga is well executed. This manga is recommended for readers of similar works such as Tekkon Kinkreet, Solanin, or Pluto.

*Note that the word “manga,” a word of Japanese etymology, is not italicized. This is because “manga” is largely accepted as part of the English and international urban language. Because manga is popular enough to transcend language barriers, the italics are not used.

← “The Game of Probabilities” Review
A Night at the Museum →