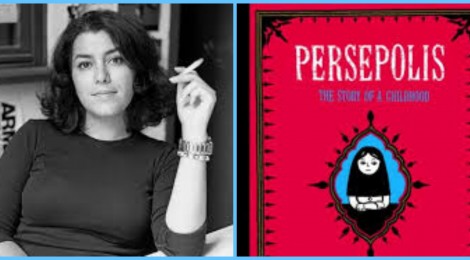 The best way for one to reveal his or her emotions and one’s history is through a means of expression with which one is most comfortable. Marjane Satrapi is one such artist who tells the stories of her upbringing and the struggles of her adult life through an art form that she finds both enjoyable and meaningful. Graphic novels are not usually found in bestsellers lists or commended in popular periodicals, but Satrapi’s autobiography had rightfully earned the praise it receives for the unique way she shares her life.

Persepolis, published in 2000, consists of 36 sections, each of which recounts one of the many pivotal moments in Satrapi’s lifetime. Satrapi, or Marji, as her family and friends call her, grew up in Tehran during the Iranian Revolution and the First Persian Gulf War.  She sees the effects of oppression from a very young age and has trouble embracing, especially because her family followed a Western, avant-garde lifestyle. Her interest in antiestablishmentarianism ignites her rebellious behavior; her parents are forced to send her to Europe to keep her safe from the regime. She returns years later and finds it difficult to cope with the destruction caused by the nation’s power structure.

Satrapi used three methods to narrate the story: thought/speech bubbles, summary boxes, and cartoon representations of all every character. Much of the story consists of dialogue between characters, with the summary boxes coming in handy for contextual background, foreshadowing, revealing hindsight, or further explanation of unclear topics. The sentences are very concise and allow for the audience to be able to make progress through the long story. The cartoon depictions of the individuals and their emotional responses add another dimension that make reading the account and analyzing characters simpler tasks. The black-and-white characters are portrayed the way Marji probably remembers them, which solidify her position as the narrator of her own story, regardless of how much bias she may include.

This autobiography shows the incredible amount of growth and development in Marji’s persona. It can be used as a classic example of a bildungsroman—the six-year-old we meet at the beginning is an optimistic lover of peace, but the adult woman we end up with is a realist with scars, both mental and physical, from her difficult past. Although we saw Marji supposedly enjoying herself throughout her teenage years (partying, listening to American rock music), most of her personality changes were shaped by traumatic events, such as the death of a beloved family member, or realizations about the environment she lives in. Even the years marked by rambunctious behavior were affected by the nearly-totalitarian regime—the children did not like it at all, so they were forced to create a world of their own to escape from it.

While other family members and friends are portrayed more as stagnant but influential beings, Marji is evolving in front of them so drastically that they cannot recognize her at first glance. She has truly become a product of the radioactive generation of Persian people yearning for revolution and the Western woman whose are only limited to the issues they face on a day-by-day basis.

The changes in the chronology and ambience of setting of Persepolis also reflect the turmoil and rapid transformations undergone by the society of Tehran. Hoards of protestors carrying signs were an inspiring sight for young Marji, especially when her parents frequently participated in the demonstrations. But as  the Islamic Revolution grew in popularity, the town suffered and lost its lively air. Marji’s time in Europe shows diversity in Europe as well, but the residents that were of some significance were either young hippies or greedy, deceitful rich folk. The scene change that follows could be characterized as the most chilling; Marji goes back home to Tehran but sees a vandalized, dystopian town. Murals of martyrs and giant rebel slogans would cover the brick walls of desecrated households, and many of the streets are renamed after the deceased.

What I found as one of the more lighthearted yet memorable instants in the tale is when an adult Marji, dressed in a burka, is racing through the streets after she realizes she would be late for a previous engagement. She is stopped by guards who tell her that she should not be running because the movements made by her behind are obscene. Marji, who obviously has no time for their unreasonable nagging, tells them off for being hypocrites and ogling her body. 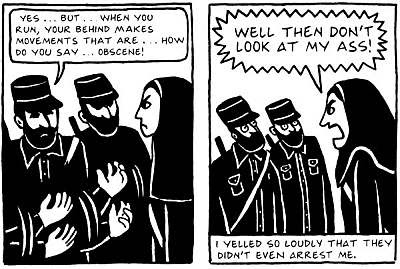 Satrapi has done an excellent job in presenting herself in Persepolis as sensible woman who maintains her strength regardless of the area she is residing in. This helps her get her life back on track after she copes with depression, but her younger self continues to be a subject of interest. Satrapi includes meaningful quotations that work as descriptions of the eras and their people, such as the quote”a revolution is like a bicycle (they will stop if they do not maintain their momentum).” Satrapi’s Persian heritage is another reoccurring theme that readers of many ethnic groups could relate to. Oppression, regardless of the system that brings it on, instills the same amount of fear and adrenaline the same way pride for culture would. The term “Persepolis” itself is a reference the grand, ancient capital of the Persian Empire. Although the Persia in Marji’s time fell apart slowly, her willpower, passion for her interests, and love for family kept the country functioning somewhat normally.