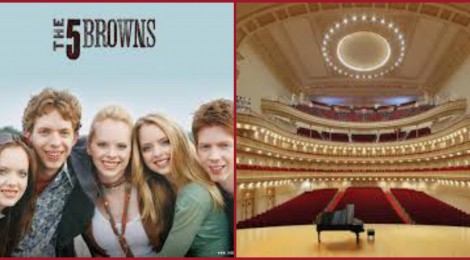 The Stern Auditorium at Carnegie Hall has heard international orchestras, famous soloists, and even the Electric Light Orchestra and a rock violin concerto, but five interlocked topless grand pianos in the center of the stage is still an imposing sight. The 5 Browns, a Juilliard-trained piano family quintet, made a dynamic debut at Carnegie on October 18th. Performing pieces from grand arrangements of orchestral such as Stravinsky’s Rite of Spring and Saint-Saëns’s Danse Macabre along with staples of the piano repertoire such as Chopin’s Nocturne in C Minor, the siblings gave a concert of monumental proportions. The evening began with selections from  Holst’s Planets. The sound output of five pianos as well as the range of timbres did limit the impressiveness of this piece. The musicians compensated for this to a small degree by plucking piano strings and using a wood block for some percussive effects, and the dreamier sound of Neptune was well complimented by the pianos. It would be interesting to see the Browns add a few more unconventional piano sounds like this to their performances in the future.

Fortunately, the limiting range of a purely piano ensemble only detracted from the performance of Planets. Variations on a Theme by Paganini sounded like the evil twin of Caprice No. 24 for violin, with dissonance and chaotic melodic lines creating an interesting twist on the virtuosic piece. Of course the piano cannot replicate many of the techniques used in the original piece by the violin, so the product was not breathtaking. The two Brown sisters did, however, play with great intensity and were so in sync that it made one wonder  if being siblings created a musical telepathic ability. Reflections on “Shenandoah” was also a satisfying musical experience that mirrored the winding journey of a river, aided by the fact that it was originally composed for five pianos.

The main event of the evening, a performance of Stravinsky’s Rite of Spring by all five siblings, was quite a homage to the orchestration abilities of the piano. This work, which prompted a riot in the theater at its premier, provoked thunderous applause and enthusiasm from the audience at this piano quintet premier. The five Browns effectively channeled the intense efforts of an entire orchestra while evoking the images of pagan Russia portrayed by Stravinsky’s ballet. While  the visual elements of a ballet were missing from the performance, the pianists were very expressive, and even from a high balcony seat, their dance-like involvement in the music was visible.

A nice addition to the evening were the short introductions of pieces presented by individual Browns. Their interaction with the audience gave a more personal feel to the concert and created the feeling that the five siblings were somehow including the audience in their big family. The Browns also helped make up for the lack of an orchestra in some places by pointing out what melodies and devices audience members should look for.

Along with ensemble pieces, the Browns performed some solo pieces such as Chopin’s Nocturne in C Major, which showcased the individual skills of Gregory, Melody, and Ryan Brown. Though not as visually impressive as the quintets, these performances displayed a great delicacy of tone and accuracy that makes the Juilliard admission of all 5 Browns more believable.

With five professional pianists all in the same family, one might expect some sibling rivalry, but it was never more absent from a family affair. At one point in the program, Desirae, Deondrea, and Melody Brown performed two Rachmaninoff pieces for six hands on one piano, sitting shoulder to shoulder on two piano benches. If you closed your eyes, it sounded like one pianist. (It was even impossible to tell that there weren’t only two very long-fingered hands playing.)

The evening ended on the high note of Danse Macabre, which even retained the devilish flair of its melody, originally intended for violins. It was a rousing and rollicking performance of a complicated piece. The performers maintained their energy throughout the piece (and it was a long evening!) and earned a standing ovation.

Considering the amount of focus and attention that goes into each orchestral part, the amount of detail and artistry the 5 Browns were able to put into large-scale works was astounding. The spectacle and sound were overwhelming, and the showmanship of the siblings created a fun concert. Bravo, Browns!