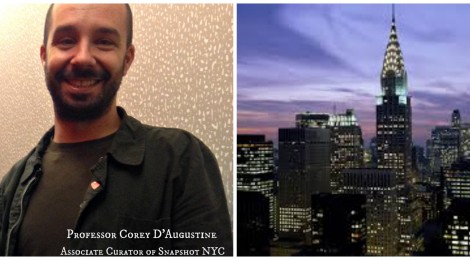 Jensine/Martin: What do you do as an associate curator? What else do you curate? Is there anything else you do in addition to curating?

Professor D’Augustine: “Well, there are a bunch of things that I do. I am a conservator or restorer. I work on modern and contemporary art, so if there is a painting or a sculpture that has some damage or if it is travelling and it is very fragile, I am the person who will take care of that. Literally, this means retouching, painting, fixing, etc. I do a lot of teaching also. I teach at the City College of New York, New York University, and at Pratt Institute. In terms of curating, I used to do more curating than I do now, but there are two classes in which I help out with curating. One is a class at Pratt, where my students and I are installing an exhibition and gallery there on campus. The second one is Snapshot NYC. I was an an assistant curator at Guggenheim and a conservator at the Metropolitan Museum of Art and The Museum of Modern Art.”

Jensine/Martin: What else have you curated in the past?

Professor D’Augustine: “There were two shows for which I was the head curator for. Both of them were at the Guggenheim Museum. It is an amazing building architecturally and it has great shows. For the two shows that I was the head of, I did the research in support of the exhibition.  Both of these shows were about one artist, so I had the chance to just think about one artist. Of course, there is art historical research, which involves where these paintings were made, who they were sold to, what the artist was painting, etc. Also, what kind of materials they were using, how the pieces have changed since they were originally made, and their fragility is considered. One of those shows was about Kandinsky, which was very interesting because there was a lot of science involved in that show. There was a painting underneath a painting! Using infrared and x-rays, the painting made by Kandinsky’s lover was discovered. Kandinsky’s lover’s painting was upside down and underneath Kandinsky’s painting. So, that was quite interesting to find. You have to figure out in which order the paints were used. You want to try to get inside the studio and inside the artist’s mind to try to understand what his perspective was.”

Jensine/Martin: Do you have to know the technology behind knowing each stroke?

Professor D’Augustine: “Part of what I do is to look very closely and imagine that if you are going to put some chemicals on a work of art, a) you want to know that piece really well, but b) you better understand the chemistry really well also. If something goes wrong, it can be pretty bad.”

Jensine/Martin: How are you involved specifically in Snapshot NYC?

Professor D’Augustine: “In a way, I am actually more of a curator instead of an advisor. My job is to help the students with what they want to do. The students have great ideas, but the students may not be thinking ahead for logistical problems or they might have a pretty good start of an idea but they do not realize that it can be taken a lot further. My role is to help the students to facilitate their project and to make sure that they are really able to pull off the ideas that they have.”

Professor D’Augustine: “I painted for a long time. Training to be a conservator allows you to see many paintings as works of art and not as objects. I just really fell in love with being a conservator and I studied a lot about it. I went to NYU for school and I have always liked teaching when students would come in after going to the museum. I started thinking about teaching at a university. It has been great. Anytime you are in a position to share something that you love, you have fun. I just love when I can turn a student onto something that they might not have found for another 10 years. Jensine/Martin: Speaking of turning students onto artwork, when was the first spark in which you became interested in art?

Professor D’Augustine: “In my 5th grade English class, we read a short story and in the short story, every student in the class was assigned to research something that happened in the story. In the short story, there was a segment about Picasso, and randomly, the teacher just assigned me to research Picasso. So I went to the library and they did not have any books on Picasso but they did have old-fashioned film slides on him. They also had a few images of a painting by Picasso called Guernica. Guernica was a Spanish town that was firebombed by Hitler. It was awful—the town was destroyed and women and children were killed. Picasso wanted to publicize that event. Now I did not know anything about Guernica or Picasso, but about a year later, my mother drove me down to Washington D.C. on a vacation field trip to a gallery of art, and I wanted to see Picasso. And, that was it!”

Jensine/Martin: What are the benefits or perks of working in the industry?

Professor D’Augustine: “Working in museums is amazing. I do private work also for galleries. There is something about education, whether it is in a museum as people are coming in or people who are coming through their schools and have to learn. Either way, it is just great to be around art and just say that you love going to work.”

Jensine/Martin: Do you have any advice for future curators or for Macaulay students?

Professor D’Augustine: “It is very important to do what you love. For example, I love teaching. For future curators, it is important to start early with art history courses.”

Jensine/Martin: Which museums do you visit often?

Professor D’Augustine: “I visit Guggenheim, the Met, MoMA, and the Frick Museum. I like the Frick the most because it is very quiet.”

Jensine/Martin: Who do you look up to?

Professor D’Augustine: I look up to anyone who follows his or her dreams. I think that it is amazing when people stick to their dreams and are not let down by obstacles on the way to reaching their goals.

The Interviews group would like to thank Professor D’Augustine once again for his support and contributions to M Magazine.