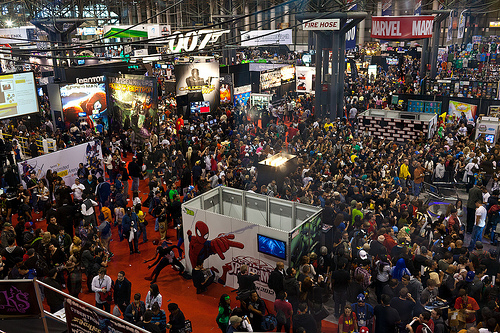 New York Comic Con 2011 was one of the greatest events I’ve ever been to. There, I’ve said it. I really wanted to have something more earth-shattering to say about the experience. I knew, going into Comic Con weekend, that I was going to be writing an article about it for the Messenger, and I wanted to come away from the event with some kind of thoughtful, critical evaluation, some piece of meaningful journalism. People certainly gave me intelligent suggestions. “Talk about NYCC’s evolution from a smaller convention to a convention that’s beginning to rival San Diego’s,” one friend suggested. “Talk about how geek culture has been going more mainstream and how that’s reflected in the growth of NYCC,” proposed another.

And sure, I could write an article about that sort of thing. I could write some kind of analytical piece on this year’s Comic Con. But I don’t want to write about anything like that, because that’s not what I was I was thinking about while I was at the convention. The one thought that kept running through my head over and over again was, “This is freaking awesome.” So instead of writing some deep, thoughtful piece…I’m writing about the ways Comic Con was awesome this year.


New York Comic Con (NYCC), which began in 2006, is the largest comic convention on the East coast. However, while it is a “comic convention,” there is quite a bit more to it than just comic books. NYCC offers something for fans of movies, television shows, and video games — so there’s something there for almost anyone. Plus, after it absorbed the New York Anime Festival last year, it now includes plenty for anime and manga fans. While the convention was initially conceived as a place for fans to celebrate their love of geek culture, it has also evolved into a place where companies can debut exclusive looks at their new products for eager fans to test drive. But there’s still so much more to it than that. While walking around New York Comic Con, you can pass by fans enthusiastically trying out the new Star Wars video game, get a free sample of a new Wonka candy product, buy a sketch from a beloved webcomic artist, meet your favorite Buffy star, and then get in line for a panel presentation that will offer fans an early look at an eagerly anticipated feature film coming out sometime next year. If you have any interest at all in pop culture, New York Comic Con is the place to be.

This was the first time NYCC was a four-day rather than three-day event, with a special added Thursday preview night for superfans, press, and professionals. This year also featured the largest turnout, with an estimated 105,000 fans total — around 10,000 more than last year. More fans meant more space was needed, and this year four floors of the Jacob K. Javits Center, where the convention has been held every year, were in use. If you can picture four floors of a convention center that spans four city blocks jam-packed with fans and exhibitors, you can picture the size of NYCC this year. Not only was NYCC physically larger than ever before, it was also larger in scale. This year exhibited some of the biggest events the convention has ever had, including a panel discussion with the stars of this year’s eagerly anticipated film, The Avengers.

Because it was so huge, it was physically impossible for me to sample more than a fraction of what Comic Con had to offer. That being said, most of the things I did and saw were just plain awesome. The big highlights, of course, were the panels on the TV series The Walking Dead and, as mentioned, The Avengers. Cast members came and debuted exclusive first looks to thousands of cheering fans and then did Q&A sessions.

There were a number of smaller panels I also really enjoyed, including a panel with Stan Lee about the new Marvel comic “The Seekers” and a spotlight panel on Felicia Day, best known for her work in Dr. Horrible and The Guild. The panels are usually what I spend most of my time doing at Comic Con, but I also made time to walk the massive show floor, the space where vendors sell their wares and big companies offer previews of their upcoming products and have free giveaways. A personal highlight for me on the show floor was buying Doctor Who-inspired TARDIS cookies from a “geek treats” vendor, but I also really had fun testing out the new Star Wars video game and watching people happily make fools of themselves in a dance competition. Walking the show floor also gave me the chance to check out the fans. It might sound a bit strange, but the fans can be just as exciting to see as the celebrities, because some people really go all out in preparing costumes to wear. A personal favorite was a man dressed as Bumblebee from Transformers, because his costume really transformed from a robot into a car. I’m not joking.

Here’s a small guide for anyone who’s potentially interested in going to NYCC but has never been before. I wish someone had told me some of these things in advance, so I hope you find them helpful!