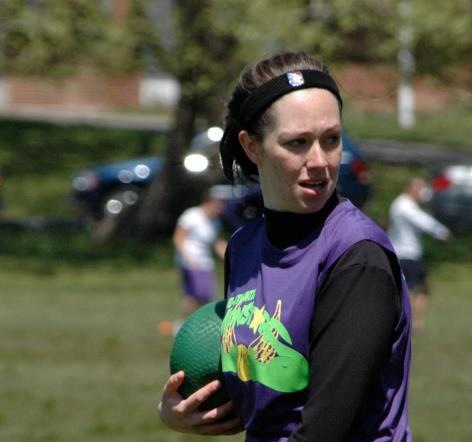 Lugging hula hoops and wooden sticks onto the Staten Island Ferry, Jenna Jankowski ’14 (Staten Island) had set out to accomplish the unthinkable — to start a Quidditch team. Yet, over a year later, The Macaulay Marauders are official members of the International Quidditch Association (IQA), ranked 49th in the league, and qualified for the 2013 Quidditch World Cup in Kissimmee, Florida. Meanwhile, Jankowski is now the IQA’s new Northeast Regional Director.

She is a Beater for the Marauders, and serves as the team’s PR Chair as well. Outside of playing for the Marauders, Jankowski is studying Dramatic Literature and interning at Staten Island Borough Hall, where she helps with event-planning, speech-writing, and more recently, coordinating recovery efforts after Hurricane Sandy. She has previously worked for TLC’s What Not To Wear and the Metropolitan Opera. She is also a “kidditch” (kid Quidditch) instructor for P.S. 11’s after school program.

While she doesn’t know what field she wishes to pursue, Jankowski said, “My skills learned in these places and being a part of the Quidditch team will help me wherever I end up.”

Her teammates have noted her hard work, as well as her rise to Quidditch-fame.

“Jenna Jankowski is now a household name in Quidditch. If you don’t know her, then you don’t play Quidditch,” said Shenuque Tissera ’15 (Staten Island). “She has worked extremely hard to create a name for her team as well as a name for herself. She’s done a terrific job! I couldn’t be more proud of her.”

Members of the IQA credit Jankowski for the Marauders’ success, and have high hopes for her as the new Northeast Regional Director.

Commissioner Alex Benepe, in a blog post by Harrison Homel of the IQA, said, “Jenna is one of those rare captains who takes her team from 0-60 in the blink of an eye. Her team did not even play in the last World Cup, yet at NERC they came in 5th. I’ve been lucky to watch them from some of their very first practices in New York City. I’ve seen how Jenna’s warm personality set the team on a ferociously loyal, tight-knit path from the beginning, and I’m excited to see how she can replicate that in the Northeast as a region.”

The Messenger had the opportunity to talk to Jankowski about her and the Macaulay Marauders’ accomplishments.

Q: Why did you start the Quidditch team?
A: I was inspired to start the Quidditch team after attending the Quidditch World Cup in 2010 with a few friends from CSI. We had wanted to check it out and being largely Harry Potter fans just thought it would be cool to observe. I knew, however, that I wanted to play. The sport was unlike anything I had ever seen and after being largely un-athletic in high school (one year of tennis and four of barely competitive cheerleading), this just seemed like something completely different. Kristin Lamonte and I had found “Muggle Quidditch” on an online Harry Potter events calendar in NYC and decided to check it out. This was not exactly like the game we had seen at WC but it put us in contact with people from the NY Badassalisks, a community team. A few months later we started it. My desire to start the team began with my interest in the sport but after our first meeting, I saw it as a way of branching the Macaulay schools. We had someone from every campus at our first practice, something that had been rare at that time (unlike now, where clubs like the Triplets do the same). To this day we have representatives from all over (excluding Queens) and its just really nice to bring everyone together.

Q: How has the team changed and grown since it was founded?
A:The biggest change has probably been in our numbers and focus. We have grown from 16 people at our first practice (eight who still remain) to a team of 33. Our focus has changed as well. Maybe not changed but definitely intensified. We have gone from a team that just played for fun to a truly competitive team with impressive athletes. Our team is a combination of those of us who were originally in it for the Harry Potter connection and the athletes who probably never imagined playing a sport with a broomstick between their legs.

Q: What is the team’s greatest achievement, in your opinion?
Obviously, our greatest athletic/team achievement was finishing fifth in the Northeast Regional Championship this past November and qualifying for the World Cup. To be a team who just started a little over a year before beating out long-existing quidditch programs at schools like Stony Brook and Vassar for a WC bid, was truly an accomplishment. It was a testament to our teamwork and extreme desire to be a top-tier team. Another great achievement is on a more personal level. Our team has become such a close-knit bunch of people and the level at which we care for one another and treat one another like family is truly impressive. We came together so quickly and our chant includes the words “Ohana means family, Family means Macaulay” and that chant is extremely true.

Q: What do like about Quidditch (Macaulay or in general)?
A: I like Quidditch because of the athleticism and fun of the sport but behind all of that is a thriving community of more than 700 teams. I have been fortunate to meet new people from every region of the United States and beyond who all possess the love of the same sport I do and are generally very nice people. Tournaments for the Quidditch community aren’t just about the competition. I’ve made best friends and have had relationships blossom on the quidditch pitch and in this community. People are supportive and we hug after games rather than just shake hands, win or lose. That’s something that I think is truly unique to the Quidditch world.

Q: What do you want to see improve or happen in the future?
In the coming years I’d like to see Quidditch continue to grow. I think it has extreme potential to be popular at all levels. I currently teach 3-5th graders the game once a week at a NYC public school and the number of high schools participating is growing but not nearly as quickly as it could. Also, a pro-league would be awesome someday because obviously I should just major in Quidditch. What I would most like though, is for the sport to be perceived as a legitimate sport. We understand that it’s a bit silly but outsiders who just see it as a game disregard the pure amount of athleticism. It’d be cool to ride the subway with my broom and not have 12 people a day ask me what it was but, in actuality I kind of love those moments. When people are curious and I get to explain what it is we do maybe I’m inspiring someone else to start their own team.

Q: What led you to apply for your new position at the IQA? And what will you be doing as the new Northeast Regional Director?
A: I had been thinking about applying for the job prior to our trip to Newport, RI for Regionals. The NERD’s job is to communicate effectively with teams in the region as well as the IQA at large, coordinating tournaments in the area and spearheading the Regional tournaments and building a community in the region. I had done this on a smaller scale in NYC, coordinating with teams around here and on Long Island and just felt like I could do the same on a larger scale. I’ve worked with people from all over the region and knew that what I was taking on would be great because of the people we have all over the place. I had also been approached by some of the higher-up people in the IQA about applying and with that encouragement, I knew it would be the right thing to do.

Q: How are the Marauders preparing for the World Cup?
A: Our biggest thing right now is fundraising. It will cost us approximately $10,000 to get to WC without spending any of our own money. The World Cup is being held in Kissimmee Florida this year. We’re preparing for events at the Macaulay building as well as starting merch sales which the Macaulay community should be keeping an eye out for. Also, when we come back from winter break we plan on intensifying our practices and working on our team dynamic even more. Although we’re good now, we want to be the best and that will take determination from the entire team. We’re also just really excited.

Jankowski admits that she has become “less active” in other Macaulay initiatives she previously participated in, but not without reason.

“I plan on helping to plan and run Arts Night again this year, as I have done in the past two but Quidditch is my baby. It’s a team that I love so much and have so much passion for, that it has taken over.”