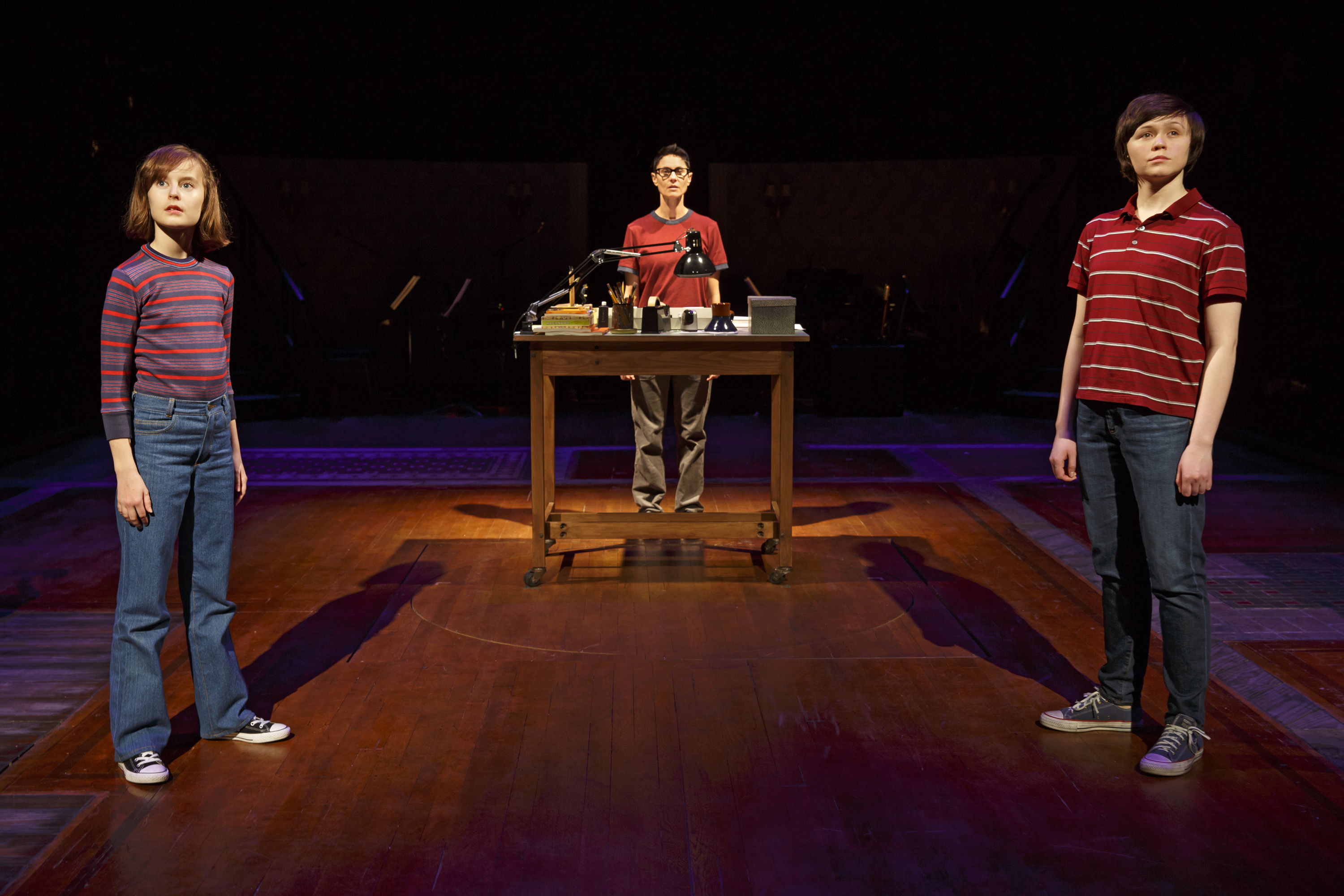 “I was Spartan to my father’s Athenian. Modern to his Victorian. Butch to his nelly. Utilitarian to his aesthete… Not only were we inverts, we were inversions of each other. While I was trying to compensate for something unmanly in him, he was attempting to express something feminine through me. It was a war of cross-purposes, and so doomed to perpetual escalation.”

So writes Alison Bechdel, lesbian and author of the 2006 graphic memoir Fun Home, excerpted above. The book centers on her relationship with her closeted, also-gay father, who committed suicide several months after she came out in college. Rarely do we ourselves analyze our (often complicated) relationships with our parents so closely, much less so articulately. And yet Bechdel deftly manages the feat with intelligence, sympathy, bitterness, dry humor, and literary allusions that pay homage to her English teacher father’s bookish ways.

I picked up and quickly devoured a copy of Bechdel’s memoir at NYCC this year, and on Tuesday, October 27, I had the privilege of seeing Fun Home, the Tony-winning Broadway musical based on the book. Although I was seated in the back row of the Circle in the Square Theatre (located, incidentally, in the same building as Wicked’s much larger Gershwin Theatre), the experience was incredibly intimate, with audience members surrounding the enclosed stage on all four sides.

True to the structure of its source material, the plot of the musical is not chronological, alternating between past and present in time with the ebb and flow of Bechdel’s memory. Three unique actresses portray Bechdel at different stages of her life—Small Alison is eight years old, Medium Alison is nineteen, and Alison, as an adult reflecting on her youth, is forty-three. The audience follows Bechdel as she works in her studio, recalling and wandering through her memories, unseen by the ghosts of her younger self and loved ones. As she struggles to make sense of these memories and the people in them (including herself), she finds herself increasingly distraught and yearning—for answers, for clarity, for closure that never came.

Like many things about her relationship with her father, Bechdel seems both highly conscious of and haunted by these parallels, in her memoir and the musical alike. Early in the show, Alison says (with Tony nominee Beth Malone striking a perfect balance between wryness and sober trepidation), “Caption: My dad and I both grew up in the same small Pennsylvania town. And he was gay, and I was gay. And he…killed himself. And I…became a lesbian cartoonist.” Bechdel’s past is hopelessly entangled with her present, and in Fun Home, she tries desperately to pull apart each strand. Arguably, in the process, she is trying to answer one burning question above all: what was the impetus for her father’s suicide, and how does his turmoil fit into the narrative of her own life as a gay adult?

A very good friend once told me, “All parents mess up their kids some way or another. It’s inevitable.” As Ben Brantley writes in his New York Times review of the musical, Fun Home “occupies the place where we all grew up, and will never be able to leave. That’s the shifting landscape where our parents, whether living or dead, will always reign as the most familiar and elusive people we will ever encounter.” In other words, it captures the universality of how parents “mess up” their children, but in spite of subject matter that is often dark, it does so lovingly. Even for audience members who aren’t queer, I would imagine that it is difficult to not be moved by the familiarity of the Bechdel family, dysfunctional though it may have been.

With all this in mind, it is no wonder that Fun Home took home the Tony for Best Musical back in June. All the basic components for a winning musical are there, from staging to lighting to score, and the quality of the performances cannot be overstated. It is easy to see why Beth Malone and Emily Skeggs (Medium Alison) were both nominated for Tony Awards, and although understudies played the characters of Bruce Bechdel and Small Alison when I saw the show, their performances were outstanding. I especially enjoyed Gabriella Pizzolo’s interpretation of “Ring of Keys,” a standout number in which Small Alison encounters and identifies with a butch deliverywoman in a luncheonette. Although the performance by Sydney Lucas in the official studio recording is outstanding, Pizzolo’s interpretation was more softly awed than declarative, bringing a tear to my eye. And Judy Kuhn is breathtaking as Bechdel’s mother Helen, bringing the role to life with controlled coldness that gives way to raw, long-repressed anguish. Her eleven o’clock solo, “Days and Days,” never gets any less painful or beautiful upon re-listening.

As is par for the course in Broadway shows, musical reprises and recycled lyrics serve to develop the aforementioned central parallel between Bechdel and her father, especially near the play’s ending. After Medium Alison’s first sexual encounter with a woman (played by the fittingly smoldering Roberta Colindrez), she fearfully questions, “Am I falling into nothingness or flying into something so sublime?” But the tone of her awakening, if it is fearful, is also optimistic. In contrast, when her father laments, “I’m falling into nothingness or flying into something so sublime,” they are among the last words we hear from a man who ultimately ends his life.

This stark difference is what makes the musical so tragic—as it draws to a close, one can hear the sounds of poorly stifled sniffling—but also, in a way, so hopeful. Bechdel might not ever be able to make sense of her personal family history, but the mere fact that her story is being told on the Broadway stage says enough about how the future is looking up for others like her. As far as Broadway musicals with lesbian protagonists go, I, for one, am incredibly glad that Fun Home is the one to set the stage for more to come.