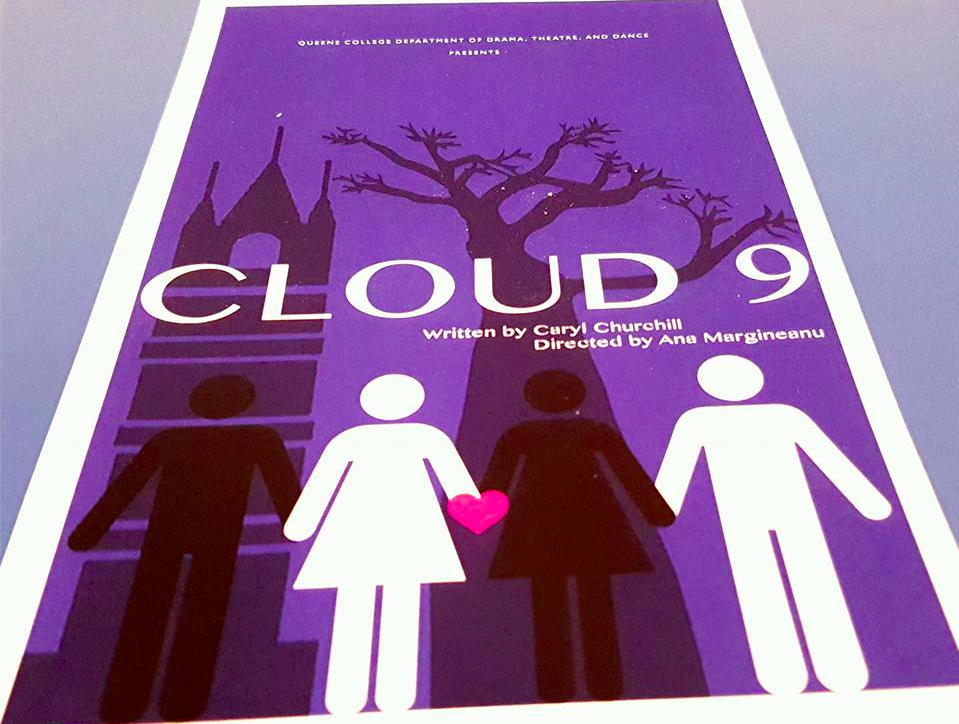 Changing tides of British colonialism intersect with the awakening of repressed sexuality in Caryl Churchill’s dark, insightful, and wonderfully odd play, Cloud 9. Currently gracing the stage at The Performance Space at Queens College, the production is at once humorous, thought-provoking, lewd, and intimate. Not a play for the faint of heart (or the conservative in character), Cloud 9 is an act with far-reaching political and social underpinnings, the likes of which remain relatively unexplored on theatre main-stage.

Double casting each actor, the show explores seemingly diametric social environments: British colonial Africa and late 70s London. Non-heterosexual centric relationships are common at each turn, and the refashioned role of women during the twenty-five year gap between the two acts is clear. The contrast between a whispered and shamed lesbian confession by one of the characters in the first act is complemented beautifully by a vocal, proud lesbian character (and an orgy scene involving more than one woman) in the second. In double casting the actors, and gender-bending them to boot, Churchill’s work takes head-on audience expectations and unsettles the idea of normalcy in the individual, in the relationship, and in the social framework as a whole.

An apt way to cap the conclusion of LGBT History Month, Cloud 9 expertly addresses the parallel between British colonial rule, patriarchal dominance, and hidden sexuality during the 20th century. The student actors were acutely understanding of the gravity of the political and social themes which Churchill intended to communicate, and likewise were skilled in their portrayal of the flawed and hilarious characters. To me, the defining moment of the show was the final scene in which the matriarch of the family is left standing solitary to examine the desolation and loneliness that characterizes her new life after leaving her husband. Realizing that she devoted her life to being a woman for man’s sake, and not for her own, she delivers an impassioned speech about the joys of masturbation and establishes fully the completed arch of character development. The actress playing this woman cut to the heart of the work, encapsulating the ironic and pervasive experience of flawed individuals living on their own, personal cloud nine, which is, albeit, less worry-free and joy filled than was advertised to be.

An amazing show with an immensely talented cast, those looking for a though-provoking break from normalcy surely will not be disappointed by this beautiful production.