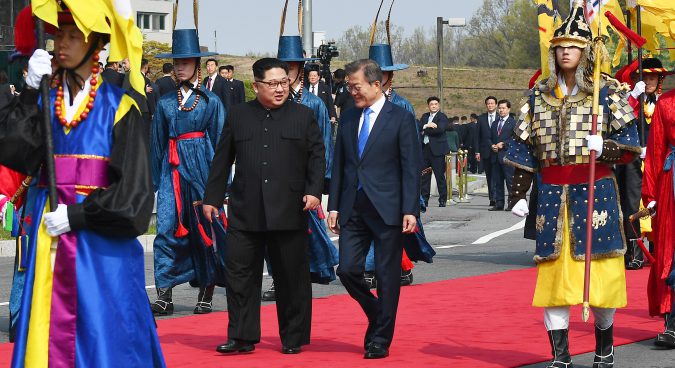 The Korean War between North Korea (aided by China and the Soviet Republic) and South Korea (aided by the United States) encompassed a tense time in middle of the 20th century. The separation and fighting between the two opposing forces at the 38th parallel threatened serious repercussions. To the rest of the world, this imaginary line of division not only signaled the difference between North and South Korea, but the difference in ideologies. It was the battle against international communism; many viewed it as the clash between good and evil. Fear of communism was at a peak following the Cold War, and American officials intervened in fear that the conflict could escalate into a larger-scale war that could encompass the world yet again.

The war, from 1950 to 1953, resulted in the loss of approximately five million soldiers and civilians. An armistice agreement was reached in order to stop the warfare. However, the demilitarized zone between the two countries is still protected ferociously, and the Korean peninsula remains divided to this very day. In a recent turn of events, new plans on the horizon could cause that all to change.

History was made in late April when North Korean leader Kim Jong-un became the first leader to cross the Military Demarcation Line into South Korea since 1953. He met with South Korean President Moon Jae-in in the village of Panmunjom with the purpose of beginning negotiations surrounding denuclearization and peace between the countries. In a symbolic gesture, the two leaders shook hands, posed for photos and walked down a red carpet. For the people of the Korean peninsula and the world who watched with eager eyes on their television screens, this could signal the dawn of a new era of peace.

While these developments are extraordinary, historians and various political experts throughout the world warn the public to remain wary. Although Kim appears to be willing to reach a compromise, his strategies for doing so may cause tensions between North Korea, South Korea and the United States. This is because President Moon favors a gradual reduction of arms from North Korea’s nuclear arsenal. For these small actions, South Korea will reward its neighbor with certain economic and security benefits. This process is expected to occur over the duration of years, but would be able to help foster a long-lasting sense of trust and communication between the previously warring countries.

In contrast, the Trump office has argued that North Korea must completely and rapidly eradicate its weapons program before any relief is offered to the country. For any leader, Kim included, these types of demands may come across as foolish because it leaves the country vulnerable. Kim may be willing to participate in these talks, but he could also be testing the waters to see the U.S. response to these events.

These negotiations fall during a very crucial point in history. President Trump plans to meet with the North Korean leader in the following weeks. Thus, speaking with the South Korean president may serve to either alleviate or highlight any tensions between Korea and the U.S. Looking at past decades of diplomatic failures, these discussions could go either way, so it is essential for both countries to see their viewpoints expressed in any possible treaty that emerges.

It is important that we recognize negotiations are still just negotiations. Promises cannot be seen unless both leaders (under American observance) take action to actively pursue peaceful relations that will serve to mutually benefit both countries.

Those who suffer terrible wars have a finer sense of when they begin and when they end.

If these negotiations are truly sincere by both parties, Mr. Moon and Mr. Kim could be the bringers of a new historical period that could trigger the blossoming of Korea. Finally, the horrible remnants of the war can be addressed, and the world can finally say the Korean War, after nearly seven decades, has truly ended.