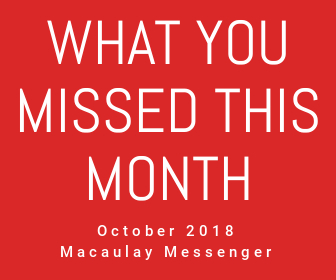 We can all agree: sometimes the news can be overwhelming. Due to the sensationalism of today’s media, it can be difficult to parce through stories and tell which are important and which aren’t. So, I’ve handpicked three of the most important stories you may have missed this month: After a long and scandal-ridden confirmation battle, Brett Kavanaugh has been confirmed and sworn in to the United States Supreme Court.

Kavanaugh’s initial nomination was rather innocuous. There were cries on both sides of the aisle; the left proclaimed that Kavanaugh was unfit to sit on the court due to his negative views of unions and a woman’s right to choose, and the right defended him, citing his years of experience and extensive resume. However, as the weeks passed, there were numerous concerns raised about Kavanaugh from the left.

First and foremost, Kavanaugh’s emails and records from the Bush White House, where he served as an aide, were largely being kept under wraps. Even now, thousands of emails remain sealed, and there are still concerns about the emails that were released. Many of the concerns revolved about the next controversy Kavanaugh faced: accusations of perjury.

Democrats pointed to a number of occasions in which Kavanaugh twisted or concealed the truth. For example, Kavanaugh claimed no involvement with the nomination of an appeals court judge, William Pryor, saying “I am familiar generally with Mr. Pryor, but that was not one that I worked on personally.” However, emails of his revealed that he may have had a hand in the nomination, as he was asked by a fellow White House aide, “How did the Pryor interview go?” and he responded: “call me.” Additionally, he was accused of bending the truth about his beliefs on Roe v. Wade, the landmark Supreme Court case affirming a woman’s right to choose. In an email from the Bush era, Kavanaugh wrote (as a lawyer) “I am not sure that all legal scholars refer to Roe as the settled law of the land at the Supreme Court level…” During his confirmation hearing though, Kavanaugh stated that Roe was “settled as a precedent of the Supreme Court.” However, these accusations pale in comparison to the scandal that dominated the latter portion of his confirmation battle: three accusations of sexual assault.

Without going into incredible detail, these allegations can be summed up as thus: Christine Blasey-Ford, a psychologist from California, confided in her Congresswoman, Anna Eshoo, and later Senator Dianne Feinstein (before Kavanaugh was nominated), telling her that Kavanaugh had attempted to rape her in high school. She wanted to remain anonymous, but her letter was leaked nonetheless. Her accusations were followed by two others: one by Deborah Ramirez, and another by Julie Swetnick. Their significance can be understood through this linked article by The New York Times. After impassioned testimonies by both Ford and Kavanaugh at a Judiciary Hearing, and an FBI investigation (that some claimed was a farce), Kavanaugh managed to be confirmed in a 50-48 vote, the slimmest margin of any Supreme Court Justice. In a scathing exposé, The New York Times laid out an incredibly detailed and meticulous list of the Trump Family’s tax schemes, and in some cases, their blatant fraud.

The articles’ most relevant revelations revolve around the manner in which large sums of money were received by Donald Trump from his father, Fred Trump. The first, and most provable of which, was the gross misrepresentation of how much money he received from his father to start his business. In a moment that has become incredibly well known around the country, Trump boasted that his father only gave him “a small loan of a million dollars,” to start his business, which he turned into a billion dollar real estate empire. However, this is simply untrue. The Times states, “Mr. Trump received the equivalent today of at least $413 million from his father’s real estate empire, starting when he was a toddler and continuing to this day.” So, while Mr. Trump claimed that he received one million dollars from his father, he instead received hundreds of millions more. This proves Trump’s facetious self-designated status as a self-made billionaire is categorically untrue.

The next, and perhaps most important fact uncovered by The Times, is tied to Mr. Trump’s “small loan of a million dollars.” In the clip, he explicitly states he paid his father back, with interest. However, The New York Times found that, in a majority of instances in which Fred Trump loaned Donald Trump money, he failed to pay it back. This, in and of itself, is an evasion of tax, specifically of the “gift tax.” When a gift of more than $15,000 is given, there is a tax placed on that gift. However, when Fred Trump categorized this exchange as a “loan,” he avoided paying out possibly hundreds of thousands of dollars in taxes.

In addition, without going into extreme detail, Trump assisted his family in setting up sham corporations to further disguise parental gifts, and furthermore, Mr. Trump helped his father take improper tax deductions worth millions. This means that for years, the collective Trump family was avoiding paying millions of dollars in taxes, perhaps illegally.

There is an incredible amount of detail in this article, and it addresses a number of individual instances in which Mr. Trump and his family may have broken the law. It is important to note that, in order for a prestigious institution such as The New York Times to accuse someone–never mind a sitting president–of a crime, an incredible burden must be met. And if that burden has indeed been met, and the accusations in the article are true, then our current president may be a criminal.

Amazon Raises Its Minimum Wage to $15 An Hour: After facing blistering criticism, Amazon raised its minimum wage to $15 an hour. Many consider this a reaction to the junior senator from Vermont, Bernie Sanders’ continued assault against Jeff Bezos, owner of Amazon.

Sanders’ message has been clear since his dark horse run for president in 2016: the 1% are slowly edging out the 99% in The United States. This message echoes early 2010’s protests and movements, the most notable of which, Occupy Wall Street. Bezos, in particular, has become a hobby-horse of Sanders’ as of late (his previous being Disney), with his populist message increasing in volume and vim. Even in his statement praising Bezos for raising Amazon’s minimum wage, he still criticized the billionaire:

“It has been my view that the middle class and working families of this country should not have to subsidize Mr. Bezos, the wealthiest person on Earth, because many of his Amazon employees earned wages that were so low that they were forced to go on government programs like food stamps, Medicaid, and subsidized housing.”

In addition to his combative legislation, Sanders went as far as to introduce the “Stop BEZOS (Stop Bad Employers by Zeroing Out Subsidies) Act,” a direct call-out to Bezos himself.

Now that Amazon has bent to the will of his employees and the senator, Sanders is now placing McDonald’s in his sights. In a letter to the president and CEO of McDonald’s, Steve Easterbrook, Sanders wrote: “If McDonald’s can afford to give its shareholders $7.7 billion, it can afford to pay all of its workers $15 an hour.”

Only time will tell whether this attempt to reign McDonald’s in will be successful, and whether Sanders’ crusade for a $15 minimum wage will ultimately be fruitful.