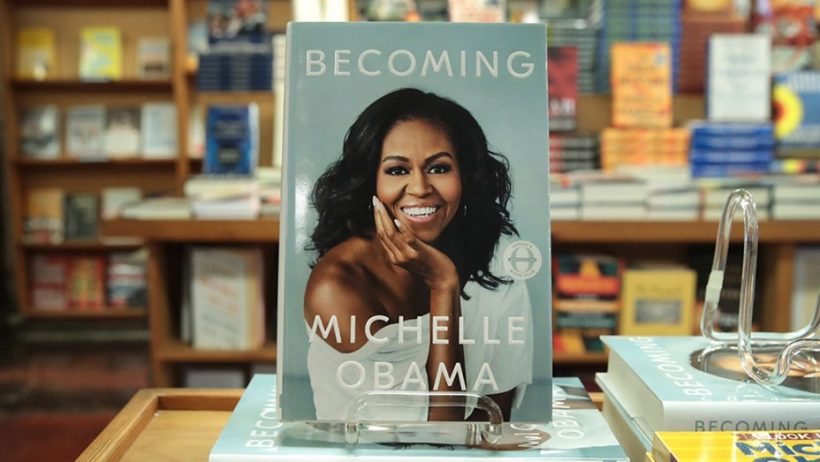 As the nation reels time and time again from the newest development from its administration, Thanksgiving provides a small respite to spend time with family and friends. Many people enjoyed catching up with loved ones, feasting on some delicious meals, and curling up with a good book. The latest book to have caught the nation by storm is one that tugs on the heart strings and makes many Americans nostalgic for the prior administration. It is a story of perseverance against adversity that tells the secrets behind life in the White House from the eyes of a poised and remarkable First Lady.

According to a recent article published by CNN, Michelle Obama’s memoir, Becoming has risen to the top of charts as the best-selling book of the year in the United States. The memoir has also demonstrated record scales throughout the world in the U.K., France, Germany, Australia, etc.  According to BookScan, a provider that maps the competitiveness of books in the retail market, Obama’s memoir has sold an outstanding 1.1 million hardcover copies since its release on November 13. It has also held similarly impressive sales through other various platforms such as ebooks and audiobooks.

The memoir provides an in-depth glimpse into Michelle’s viewpoint as she lived and worked in the White House during her husband’s eight year presidency. It discusses the pretty and the ugly, the struggles she faced with her family and her own initiatives as first lady. It provides a background into the female icon who advocated for inclusion, detailing everything from her childhood in Chicago, to the role she played as a mother, and the long road it took for her to get It is brimming with anecdotes, insider details, insight, and advice.  The memoir and promises to be a good read and a great gift for someone during the holiday season.

The woman behind it all finds herself on a whirlwind book tour throughout the country. Along the way, Michelle Obama has made guest appearances on several talk shows, including The Late Show with Stephen Colbert on Friday, November 30th. She eloquently in response to her time following the White House: “It was just the release of eight years of feeling like we had to do everything perfectly. That there wasn’t a margin for error. We couldn’t make mistakes. We couldn’t slip, our tone had to be perfect. That was the bar that was set for us.” Throughout the interview, Obama highlighted the stress of  public scrutiny for every waking second of the day. The way she raised her children or the way she acted in response to certain current events would play an instrumental role in how society viewed her. Certain aspects of the memoir were able to shed light on the fact that the Obamas are human just like the rest of us. They had children to raise and worry about, school events to attend, and family time to spend together.

Michelle  had sharp and noteworthy statements to say about the race and politics under the new administration. As the nation’s first black president and First Lady, her family felt an overwhelming sense of pressure that is not evident with the new administration. She reflects on the changes she has seen happen in office since Donald Trump has taken over and speaks about the importance of not only having the president serve as a strong, well-versed politician, but also as a moral leader. Obama had some scathing remarks about how Donald Trump truly put her family’s “safety at risk” when he proposed his birther theory, claiming Barack Obama had not been born in the U.S. and thus could not be considered a true president by law.

So, as people gives thanks to the special figures in their lives, I’d like to take a moment to thank the Obamas for all of the hard work and dedication they have shown to improve the U.S. government and the way of life in our country. They accomplished all they did gracefully, while maintaining a healthy family dynamic and not compromising their values or morals- a truly admirable feat. Personally, it has been a difficult two years since they left office, but I am grateful that we were able to make history with such a remarkable man and woman. In contrast, it appears that the Trump administration is rife with controversy.   A new conflict appears on the news every day. Michelle’s memoir came at an ideal time following the elections because many people have politics on their minds. Sometimes, when we become too wrapped up in parties and policies, we tend to forget about the human emotions and struggles that come with having a position of power. Becoming humbles us.