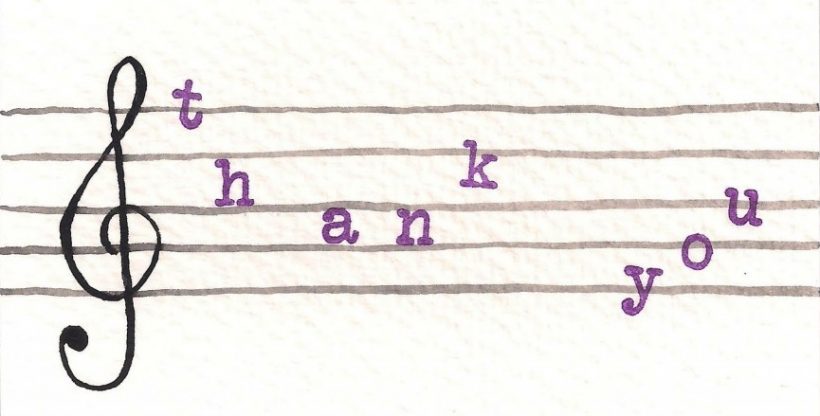 The “thanks” in Thanksgiving is the extent of many people’s gratitude. We use the word when someone holds a door, provides a service, or shares a kind word. Our parents push this form of gratitude—involving words alone—onto us as children: “Say thank you!” As the habit becomes entrenched, the words become a pleasantry rather than a meaningful reflection on the nature of giving and receiving. Fortunately, a brief look at human history and culture reveals another way to express gratitude—music.

Music’s centrality to religion and prayer is evidence that music is a high form of gratitude. Music has accompanied humans for thousands of years in their quest to connect to the divine. Brahma is taught to have created the Universe with “om,” a musical chant. Deeply grateful to God for redeeming them from bondage, the Hebrews joyously sing the Song of the Sea after crossing the Red Sea in the Book of Exodus. Religious services are heightened by several musical elements to this day. Why does this link exist between music and the divine?

Because recorded music is a recent invention, music existed as a group effort for thousands of years. When people came together to create music, they put their differences aside. The relaxing, reflective nature of music helped facilitate calm and harmony between individuals. This, then, sounds like a fitting way to address an underlying human area of tension: What is the nature of stars, the moon, the sun, the meaning of life? As people speculated, religion—and music—gave answers. People joined together through music to overcome their existential fears and create something so emotionally stirring as to seemingly transcend space, time, and mortality. Making music, is a creative, albeit ordered, act. It thus represents a uniquely human response to an innate fear of chaos, death, and the unknown, transforming uncertainty into appreciation for having been created and sustained through divine providence.

How can the average person tap into music’s potential? One can use music to bond with others, elevate one’s outlook on life, and find meaning in every experience, all of which are key elements of gratitude. When one feels connected to others and views life and humanity through a positive lens, one is far more likely to feel grateful for the gifts each day provides. Of course, few actually value all that life has to offer, too poisoned by the voice of negativity, flaws and relationships gone south to acknowledge the gift of simply existing. Music, then, ought to serve as an exercise in higher thinking. When my sister and I play guitar together, or I perform with my band, we experience a sublime connection. That is because playing music requires one to give up a part of oneself for the collective. Performing with others is an opportunity to think about how we might be most effective as a collective rather than to self-indulge; this demands empathy and an ability to recognize another person’s time to shine. A band’s success is linked to the audience’s pleasure. The best performances can be characterized by the degree to which both band and audience put aside their earthly differences and experience raw emotion.

You need not actually play an instrument or sing well to enjoy the effects of music. Listen to music with others. If music has successfully brought wildly different people together under the scope of religion and prayer, music can certainly help you connect to those you might feel disillusioned with or distant from. Sing in the shower. Write a poem on the train. Attend concerts, dances, theater, or lose the headphones and play music out loud with friends or family. While technology has permitted it, music was never meant to be heard in isolation. Dance with others in the rain, eternally grateful for this unique opportunity to celebrate the very act of living.