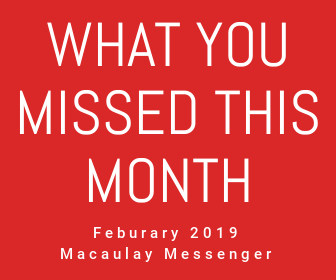 Another year means more news to sort through, Macaulay! We can all agree: sometimes the news can be overwhelming. Due to the sensationalism of today’s media, it can be difficult to parse through stories and tell which are important and which aren’t. So, I’ve handpicked three of the most important stories you may have missed this month:

The biggest news of the month, especially for New Yorkers, is Amazon’s decision to scrap their plans for a HQ2 in Long Island City. This news came as a surprise to many, including those who advocated for its destruction — most notably State Senator Mike Gianaris and City Councilman Jimmy Van Bramer, both from Queens. Senator Gianaris had an impromptu press conference in his office through Twitter, saying, “What we witnessed today was why Amazon was a bad partner for New York to begin with. Here is a company that has concentrated so much power that they think they can dictate to states and cities what to tell their people.”

Amazon began its search for a second headquarters, sussing out in which city it would get the best tax incentives. Eventually, the corporation settled on splitting its headquarters between Arlington and Long Island City. The deal was made in a backroom, between Amazon, Governor Cuomo, and Mayor deBlasio. Dozens of elected officials sent a letter to Amazon, urging them to come to our city. After a rancorous uproar (mostly from Democrats in the State Senate and vocal advocacy groups), Amazon stated, “A number of state and local politicians have made it clear that they oppose our presence and will not work with us to build the type of relationships that are required to go forward.”

What are the consequences of this? Honestly, it’s hard to say. The promises that Amazon made seemed lofty at best, and it’s difficult to trust a large corporation trying to make a buck. The 25,000 new jobs certainly won’t be coming to NYC, and there will be a strained relationship with the Governor and the State Senate. After radio silence, Cuomo came out, proclaiming, “What happened is the greatest tragedy that I have seen since I have been in government,” largely blaming State Senate Democrats. Will this decision dissuade large corporations from coming to NYC? Does the swiftness of the decision create a rift in the city? Time will tell.

If Amazon was a blaze in New York, then there’s a forest fire raging in Virginia. The Commonwealth went through a number of scandals, involving their Governor (Ralph Northam), their Lieutenant Governor (Justin Fairfax), and their Attorney General (Mark Herring).

The series of scandals began when Northam’s page in his medical school yearbook surfaced, featuring a picture of a man in blackface standing next to someone dressed in KKK garb. At first, Northam said he didn’t remember which person he was, and apologized profusely, stating, “The decision I made to appear as I did in this photo and for the hurt that decision caused then and now.” The apology seemed genuine, however, the next day Northam held a bizzare press conference stating, “I am not the person in that photo,” admitted that he’d worn blackface for a Michael Jackson dancing competition, and had to be stopped by his wife from moonwalking mid-press conference. There were calls for Northam to resign both from within Virginia, and around the country. He remains the governor.

Shortly after, a series of accusations came out against Fairfax from two women accusing him of sexual assault. One woman accused him of turning consensual kissing into sexual assault, and another accused him of rape. Fairfax vehemently denied these allegations, and called for an investigation into the claims. Hearings are planned, but not officially scheduled yet.

To pile onto the scandal, Herring admitted to wearing blackface in 1980, a confession that didn’t garner as much attention as Northam’s bizarre spectacle and Fairfax’s concerning allegations. It’s unknown how these scandals will play out, but one thing’s for sure: Virginia has some soul searching to do.

On the Republican side, former Massachusetts Governor Bill Weld has stood up to challenge President Trump, and time will tell if any other Republicans will do the same. Some speculate that Ohio Governor John Kasich or Maryland Governor Larry Hogan might put up a fight as well. And of course, there’s Howard Schultz who is exploring a run as an Independent, but may as well run as a Republican, as the ire he has drawn from Democrats is overwhelming.

It’s far too early to tell what the state of the race is going to be, but Senator Sanders and Senator Harris are the two frontrunners currently. Former Vice President Joe Biden would be one of the top contenders if he joins the race, as some expect him to. I’ll keep you updated as this crazy, crazy election season continues.