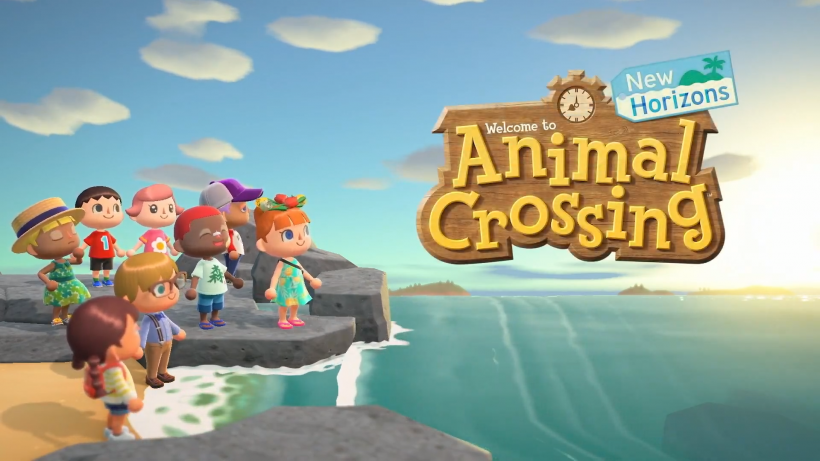 If you look closely, you’ll notice that we aren’t standing 6 feet apart.

If, like me, you are at home for the foreseeable future due to the spread of COVID-19, you may be looking for an escape from the monotony of self-quarantine. Nintendo’s Animal Crossing: New Horizons, which launched on March 20th, could not have arrived at a better time to serve as that escape.

Animal Crossing is a series of life simulation games in which you build a bustling town full of anthropomorphic animal villagers, and New Horizons offers you the chance to move that town to a deserted island setting. You’ll begin by carrying out a series of tasks for notorious raccoon tycoon (try saying that five times fast!) Tom Nook, but after the short tutorial, you’re free to expand your island at your own pace. In addition to decorating and improving your village, you can also collect bugs, fish, and fossils to furnish a beautiful museum, befriend your animal neighbors, and travel to procedurally generated islands to collect resources, new fruits, and more.

A low-stress escape for a stressful time Don’t be afraid to take a break from being productive.

Many people have recently transitioned to working or attending school from home. With this switch comes a new set of deadlines and responsibilities which, despite helping to maintain a sort of daily schedule, can leave you feeling stressed and worn out. New Horizons comes with no deadlines; in fact, the game encourages you to take your time and enjoy yourself. Animal Crossing titles have historically progressed in tandem with real-time, which means that you don’t have to rush to perform a specific number of tasks before the in-game day finishes. Instead, you can play the game for an hour or two and then pick it back up again the next day to find that trees have grown, flowers have sprouted, and buildings have been completed in your absence. This is the kind of game that you can play in your offtime, and it doesn’t rush you, which can be a welcome change of pace from real life.

You get to flex your creative muscle In past Animal Crossing titles, you have been able to fully customize your own home, as well as a few aspects of the outdoors in a few games. New Horizons takes this aspect of customization to a new level, granting you full control of where to place bridges, staircases, and even buildings. Almost every furniture object in the game can be placed outdoors, which is a first for the series. Later on in the game, you can even sculpt your island’s rivers and cliffs to your exact specifications. In short, you can pretty much create whatever type of world you want.

This is also the first Animal Crossing title to allow you to create your own character without the use of an arbitrary personality quiz, so you can craft your character to be exactly like you or try out a look you’ve always wanted to see on yourself!

You can connect with your friends while safely social distancing This house definitely isn’t big enough for the four of us.

This is perhaps the aspect of New Horizons that sets it apart most from other recent releases (I’m looking at you, DOOM Eternal). Not being able to see my friends has been one of the worst aspects of the current pandemic for me. In the absence of in-person social gatherings, New Horizons has filled that void by creating a virtual hang-out space so that I can safely socialize with my friends without coronavirus dominating the conversation. Using the Nintendo Switch online feature, I can invite friends to my island or hop on a plane and take a flight to theirs. While visiting others you can chat, gather materials you may not have access to on your own island, and rummage through their belongings in their homes. Seeing your character standing next to your friends’ characters can help you to feel close, even though you may be very far away.

Animal Crossing is just the right niche social game for the world’s current situation. This game is exactly what I have been looking for to get through this period of isolation: a soothing, wholesome island oasis that lets me forget about my responsibilities and the chaos ensuing outside. If escaping to a deserted island to start a new life sounds like a good plan to you right now, New Horizons is waiting.

A reference to the 2018 movie Ready Player One. Source: Twitter