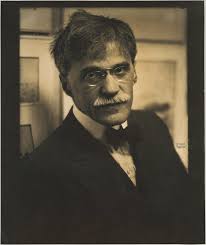 Alfred Stieglitz is an American photographer, gallerist, and publisher known for the rise in modern photography in the early twentieth century. Born in 1844, in Hoboken, New Jersey, Alfred grew up in a family of seven. In 1881, Stieglitz and his family fled the East Coast and moved back to Germany, where Alfred studied to become an engineer. Although educated in mechanical engineering, Alfred had a great interest in photography.

Stieglitz bought his first camera in 1882 and shot pictures of the German landscape. Throughout the upcoming years, Stieglitz released articles and photos in a British magazine called the “Amateur Photographer.” By doing this, he created a standing in the European photography field. He arrived in New York in 1890 to further implicate the idea that photography could be seen as a “medium as capable as artistic expression as painting or sculpture” (Hostetler). This is when he led the Pictorialist movement. This movement was responsible for advocating artistic legitimacy of photography in the United States. Famous photographers that would later appear such as Ansel Adams would have never been able to achieve the level of fame they did if it wasn’t for Stieglitz’s work during the Pictorialist movement.

Unlike his peers, he focused on compositional effects, looking more at the natural effects such as snow and steam to create qualities similar to the Impressionists. Stieglitz earlier work was seen as depicting “soft, ephemeral, natural processes with motifs drawn from American industry” (Alfred Stieglitz). American power amazed him and he wanted to rid the cruelty associated with it by concealing it in nature. Stieglitz and a group of other photographers formed the Photo Session in 1902 which focused on the craftsmanship in photography. Stieglitz edited Camera Work from 1903 to 1917 along with building exhibitions. These studio spaces were donated by Edward J. Steichen became known as the Little Galleries of the Photo-Secession in 1905. This gallery consisted of both paintings and photographs. Its name may also be known as “291.” The primary focus of the Secessionists was on the techniques of the photographer. Through gallery 291, he exhibited the idea of European modernism to Americans.  He premiered Augese Rodin, Pablo Picasso, Paul Céanne, Constantin Brancusi, Francis Picabia, and Henri Matisee in this gallery. His photograph, The Steerage, dealt with the idea of Cubism and of conveying transcendental truths. It represents immigrants arriving in America from Europe. His photograph From the Back Window, argued to be inspired by Cubist imagery, shows his experimental idea of picturing the beautiful city.

Stieglitz focused on his Equivalent series featuring photographs of clouds from 1922 and 1935. He photographed the clouds in hope that the pictures of the sky would reflect his photographic intentions. He later opened two more galleries, known as the Intimate Gallery and An American Place soon after 291. Toward the end of his life, Stieglitz primarily focused on his galleries. These galleries were the Anderson galleries (1921-1925), The Intimate Gallery (1925-1929), and An American Place (1929-1946). As he aged, he produced less and less photographs, and when he did, it was through his gallery window. One of his final photograph was From My Window at the Shelton, North which maintained his position as a vital figure in American photography. His final photos highlighted the idea of Cubism which can be seen by the “geometric forms of the city as seen from an upper floor of a modern skyscraper” and also emphasized “the fragmented nature of contemporary life” (Hostetler).

Before Alfred Stieglitz, photography was mainly viewed as historical records. He himself was able to popularize this method. Towards the end of his legacy, he saw interest in straight photography which consisted of more clarity and less effects. It represents the decline in Pictorial photography and the invention of a new method that revealed truths about the aspects of the modern world. “Turning to more geometric motifs, effects of sharp focus, and high contrast, it celebrates a more mechanized phase of modern life in America” (Alfred Stieglitz).  He married Georgia O’Keefee in 1916. Many of his photographs consisted of her nude. She was famous for both her art and her husband’s photographs of her.

The first course theme I would like to discuss in relation to Alfred Stieglitz’s work is the question of “What is art?”. When it comes to photography, some people struggle to understand the artistic process that goes behind an image’s creation. They think a photographer simply presses a button and captures a scene perfectly but they fail to see how taking a picture is an artistic process just like painting a painting or sculpting a sculpture. A large part of what Stieglitz dedicated his life to was helping photography be respected among artistic circles in New York and eventually abroad. In order to prove that photography deserved a place among the fine arts, Stieglitz focused on his use of tone and texture to create the atmosphere in a scene. In showing that the elements of an image can be manipulated at an artist’s whim, he showed the people of the early twentieth century that photography was no different than traditional media of art.

The next seminar theme I would like to discuss that represents Alfred Stieglitz and his art is its meaningfulness. We see how his photography changes as he ages. When he first took interest in photography, he was focused more on Pictorial photography, which was a way to show the emotional motive of the photograph to the viewer. Then we see him taking on inspiration from Cubism. His different photographs such as The Steerage and From the Back Window both reveal a lot to the eyes of the viewer. The Steerage depicted the struggle of immigrants arriving to America while From the Back Window showed the aesthetic meaning of the city life.

In Heilbrunn Timeline of Art History. New York: The Metropolitan Museum of Art,