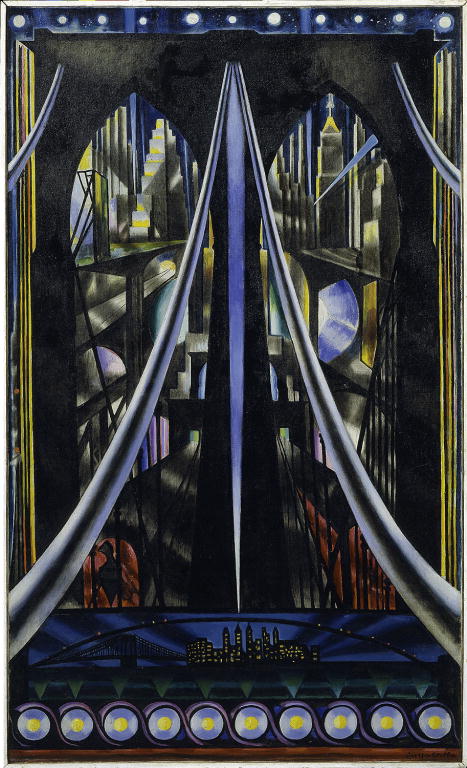 The Brooklyn Bridge: Variation on an Old Theme (1939)

Joseph Stella was born on June 13th, 1877 in Muro Lucano, Italy with the original name of Giuseppe Michele Stella. He grew up with four other brothers in southern Italy, near Naples. Stella was expected to follow in the family vocation as a lawyer along with his brothers; both his grandfather and father practiced as attorneys, which helped their family maintain a comfortable lifestyle. However, Stella exhibited artistic promise as a young child. He began drawing as a young boy and gained a passion for art. He was successful in the academic realm as well – he practiced both the English and French language in school. In Stella’s late teen years, he traveled to America in order to pursue the field of medicine and pharmacy. He arrived with the other influx of immigrants at Ellis Island, where his Americanized name ‘Joseph Stella’ became his foremost identity. Despite his assimilation to the American culture, his family roots and heritage remained in many forms – his family continued to call him by his childhood nickname “Beppino” years after he moved away from his childhood hometown. Although Stella originally moved to New York with the intentions of practicing as a doctors, after two dissatisfied years of studying, Stella took an antiques course which inspired him to transfer to the New York School of Art, where he learned from William Merritt Chase, an American impressionist painter who would later become the founder of what is now Parsons School of Design. Another one of Stella’s teachers was Robert Henri, who claimed that any subject could be depicted through an artistic lens. This man helped Stella look to his fellow immigrant population as an artistic muse. Later on, Stella returned to Europe where he continued his exploration of the art realm. This trip helped cultivate his identity as a member the Cubist and Futurist era.

Stella lived and worked in New York city for a great portion of his life, but his heart and home truly resided in Italy, his birth area. In essence, Stella’s dual identity helped him create a unique artistic perspective – he created a link between New York and avante-garde Europe.

One of Stella’s most iconic pieces is his depiction of the Brooklyn Bridge, which is still understood as the spark of the Machine Age. It became a metaphor for material progress and included religious allusions. Later Stella began to fuse the ideas of secular and sacred concepts more in his artwork.

His Life as an Artist

After he graduated, Stella began working as a magazine illustrator from 1905 to 1909 and focused on a realist technique. Oftentimes, he drew immigrants and miners for his magazine. He also developed this painting technique initially with the painting, The Old Man. Within these early portraits, Stella’s ability to draw with an empathetic, detail driven style shone through.

When Stella visited Europe for a couple of years, he gained the knowledge and inspiration to delve into the Futurist vein when he returned to New York; Battle of Lights, Mardi Gras, Coney Island (1913) was his distinct work when he came back to America. This piece was “a scintillating hymn to electricity, urban noise and speed, [which] suggests a saint’s-day procession, ablaze with candles, winding through the streets of Little Italy.” The Italian Futurist technique was when Stella began introducing color into his work. He met influential artists in avant garde New York which he inspired and worked with.

In Stella’s latter years, he focused more on the geometric architecture of the urban buildings downtown. Lower Manhattan inspired some of his more well known works which were a mix of Futurism and Cubism. He created many collages throughout the roaring 20s period which consisted vast materials, such as paper scraps, wrappers with logos on them, and other indicators of the city. Although Stella made works within many artistic movements, he never aligned himself with a singular movement. He created abstract pieces on glass, realistic portraits of city dwellers, or drew delicate flowers. He had varying styles and subjects throughout his years.

Stella’s work perhaps gained so much traction even in the modern day because his work as a wanderer between Italy and America, reflecting “materialism and religion, modernism and folk idioms,” depicts differing perspectives that many can relate to. His multicultural art from nearly a century ago is very common to the modernist. He depicted immigration during the industrial era, and Americans are all immigrants in a sense, drawing history and culture from their pasts.

“I was thrilled to find America so rich with so many new motives to be translated into a new art. Steel and electricity had created a new world. “

Stella depicted America through his art in a time when America was undergoing rapid industrial change, as he began studying prior to the Roaring Twenties. In the late 1800s to the Great Depression, America underwent extreme urbanization and industrialization which transformed the nation into a technologically advanced powerhouse. Simultaneously, this time period attracted vast immigrants hoping to prosper in America- the land of opportunity. City population on the East began to sour, as urbanization built cities vertically. The concentrated neighborhoods in New York City enabled for specialization and cheap labor, which helped industrial growth skyrocket. Changes in production and transportation led to suburbanization later on, which helped the population spread around major cities. The Roaring Twenties reflected a time of increased standard of living where people were easily able to buy on credit, take out loans for investments, and competition drove material prices down due to lenient government regulation which favored big business. Joseph Stella was an outsider who looked in on the changing environment of America; as such his style and subjects evolved through his time spent observing New York City.

Joseph Stella can be connected to our seminar theme of immigrants. Like many people at the time, Joseph Stella immigrated to the United States in search of opportunities and success. From a small town in southern Italy, New York City was a shock to him both culturally and mentally. He often felt homesick and out of place, taking frequent trips back to his hometown. This feeling and experience as an immigrant was a formative aspect of his artwork. In Europe, he learned of the Futurist movement, in which he used as inspiration to portray modern day. He brought this movement to America, and New York City became the focal point of his work. As an outsider looking in, he viewed the city with fresh eyes. He was astounded by the city’s colossal skyscrapers and intricate bridges. He knew this was the quintessential city of the modern era. Using bright colors, sweeping lines, and geometric shapes and patterns, he conveyed New York City in this futuristic light. From this, he is now considered the first futurist painter in America. Among his most famous work are depictions of the Brooklyn Bridge, Coney Island, and a factory in New York City. His ability to interpret and portray New York City is founded upon his journey as an immigrant. He may have lived in New York City, but he never truly made it his home, rather his muse.

What is art and what is its purpose? The Brooklyn Bridge: Variation on an Old Theme (1939)

At this time, many people were trying to define art and serve it to their purposes. Amongst them, Stella challenged the Futurist movement, believing it should base its work on modern day rather than the past. For him, art was a form of expression. It’s purpose was to convey meaning and feeling. Although he employed futuristic techniques to depict New York City, he didn’t believe in strictly using one style. He fluidly moved and explored between different techniques, implementing them where he saw fit. In the case of his painting of the Brooklyn Bridge, he uses futuristic techniques to emphasize the architectural feat the bridge represented, a step forward into a more modern society.

Its riveting colors and shapes convey excitement and structure. On the other hand, Stella also used surrealist and abstract techniques in other paintings to convey different meanings. He manipulated and used all different styles in order to make his point. Stella used art as a medium of expression, and it did not matter to him how he went about portraying it.

At the time, New York City was going through a period of rapid industrialization. The amount of buildings and bridges built to this massive standard in such a short period of time was unprecedented. New York City was unique in that no city had ever looked like this before. Stella recognized the significance of this and portrayed it in his art. He saw the future in New York City, the progress and opportunities it held. Its towering skyscrapers, its vibrant life, bridges extending over water and connecting land; these were feats ahead of its time. Stella beautifully portrayed this in his work, using futurist techniques. Despite being a homesick immigrant, he could not even deny the grandeur of New York City.

Rees, Jonathan. “Industrialization and Urbanization in the United States, 1880–1929.”