Celebrated every first Saturday in May and 1 9th of September, in Naples, San Gennaro has the bearings of a true religious holiday.  The celebration begins when a silver bust of the saint is led in a proces sion through the center of the city.  The busts of other saints, among them S aint Teresa, Lucia, and Patricia follow as the people lining the sidewalks cheer1.

Upon reaching the Duomo di Napoli or Naples Cathedral, Saint Gennaro’s bust is put next to the altar and the vial holding his blood is shown by a priest to all gathered inside.  Then if the blood begins liquifying, cheers erupt.  Catholics inside the cathedral move forward to put a kiss on the vial small celebrations begin.  Yet it always the case that the blood liquifies.  On some years that it does not, and for those, great hardship or tragedy is expected to befall Naples2. 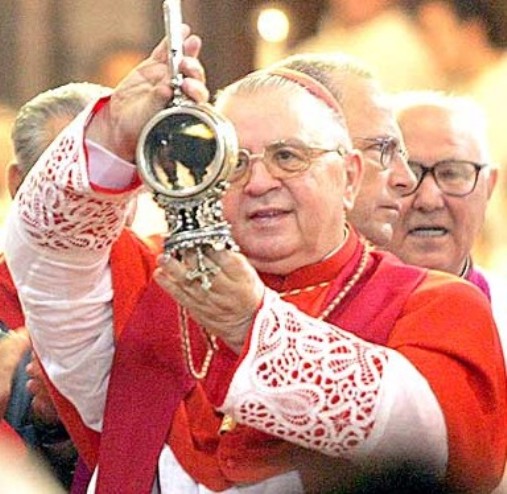 Below is a video of a San Gennaro celebration inside the Naples Cathedral.

In contrast to the almost quiet religio us celebration in Naples, the Feast of San Gennaro in New York City is not only incredibly rowdy but also has been transformed into a celebration of Italian cuisine.  Every year for 11 days picked mid September, large crowds gather in Mulberry Street, Little Italy.  There they see parades, listen to free music, and feast on big Italian sausages and fried mozzarella3 bought from the food carts and Italian restaurants, such as SPQR, that make a killing.  On September 19th, in homage to the festival’s religious origins, a stone bust of Saint Gennaro is carried from The Most Precious Blood Church through Mulberry Street and bac k4.

But what exactly caused this drastic change from a sm a ll religious festiv al in Italy to a loud boisterous feast in Manhattan?  Is it American ization?  One thing that undoubtedly plays a role is the demographics of the city.  In 2000 over 700,000 residents claimed Italian ethnicity5.  But not many people seem to have been born in Italy. In fact, as of 200 0, in little Italy there lives not a single residing native-born Italian6.

As one festival goer said “”We come down here every year and have a ball.  This Festival is all about having fun.”  Money from the festival’s commercialization also plays a role.  The lure of money for Italian restaurants and stalls has been too hard to resist to preserve the festival in its original Neapolitan manner.  Some are even claiming that the festival has become little more then a “money-making tourist trap.”  Perhaps to prove this, one Italian stall has begun selling mixed Italian/Chinese food7.  Or perhaps the difference across continents stems from the loss of tradition that families of Italian descendants face after the many decades they spend living in the United States.  Such a phenomenon has also been observed for the loss of tradition in the holiday of Easter.

Over the start of the 20th century and between 1900 and 1920, over 3.2 million mostly Southern Italian immigrants settled in the United States8.  Many chose to live in New York City.  They, through their expression of culture have created this wonderful festival.  And yet there is still trouble.