I am really glad that we watched Do The Right Thing in class. This is probably one of those movies I would not watch on my free time. Even though the jokes were old the movie was still very funny. One thing I noticed during the movie is that the day when the temperature hit 100 degrees, the hottest day of that summer, everyone in the neighborhood became fired up. The tension and hatred between each race became visible. Bugging Out complains at the pizzeria about how there are no “brothers” on the wall of fame. Sal retaliates by threatening to break his head with a baseball bat. Then a white bicyclist steps on Bugging Out’s sneakers and they almost get into a fight. The three old men on the sidewalk complain how the Koreans are opening grocery stores and making money from the Black people. The guy with the big stereo blasts music in Sal’s pizzeria and causes problems there. On that day it just seems like everyone was releasing their anger at each other. But like any heat wave, it comes and goes. I predict that once the heat wave ends in the Brooklyn community of the movie the hatred between each group will decrease. I think that everyone in the community will learn to live together and put their problems aside. Overall I enjoyed the movie and I look forward to finishing it.
Something I noticed as I was reading the first two acts was that Henry Bolingbroke is King Richard II’s foil. Henry brings out the true flaws of Richard. Henry is a brave man willing to risk his life to prove his beliefs true. For example in Act 1 Scene 1, he agrees to duel Thomas Mowbray just to prove to Richard that Mowbray is a criminal. On top of that he is willing to lead a rebellion to take over Richard II’s throne. If he were to fail he would have to give up his life for committing treason. Richard describes Henry as a person who was loved by the lower class, “Observed his courtship to the common people; How he did seem to dive into their hearts With humble and familiar courtesy… (1.4.?)” In the end when Richard leaves to go to Ireland, Henry is able to convince people under Richard to join his rebellion. On the other hand, Richard is completely different.  He is not fit to wear the crown. He does not listen to the advice of his family members like John of Gaunt. Rather he is easily swayed by his selfish advisors. Richard is a big spender and has emptied the funds of England. To fund his war in Ireland, he decides to borrow money from the wealthy and tax the lower class. There is no question that Richard is hated by most of society. In the end Henry’s heroic traits magnifies Richard’s flawed traits.
As I was reading this play, it instantly reminded me of a fairly modern (2006) movie titled “John Tucker Must Die.” Both Don Juan and John Tucker are womanizers in their own respective stories.  Don Juan treats women like objects. He makes them fall in love with him for self-pleasure. Once he is done with them he leaves them and to go find another “wife.” John Tucker uses his charm and dates several girls at once; breaking up with them once he gets bored. I found Don Juan’s ability to convince both peasants, Charolotte and Mathurine, that he will marry them very amazing yet funny. He was able to pull it off with both girls right in front of him. Similarly John Tucker is able to hold on to multiple relationships with girls in the same school with his sly ability to talk. However, all good things must come to an end. Both characters’ plans backfire. Eventually Elvire, Don Juan’s wife, finds out and her brother is out for revenge. In John Tucker’s case his multiple girlfriends devise a plan to ruin his social life. In the end, the characters’ own downfall is due to their desire for lust.
I gave myself some time and jotted down any words that came into my mind related to the High Line. From that list I created a word cloud. I then picked out eighteen of my favorite photos that I took at the High Line. I created two collages from the pictures. Please Enjoy ! 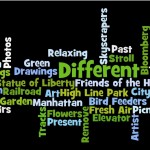 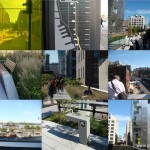 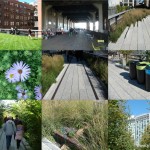 I could be totally off with this comparison but I see Patti Smith as Lady GaGa of the 60s.

Both of them are idols of their time periods. Smith was highly influential in the punk rock movement, while Lady GaGa is an innovator of today’s music. From the novel and the NPR interview, I characterized her as a rebel. In the NPR interview she said how she would where dungarees to the beach rather than the normal bathing suit. Also from the interview she mentions the argument she had with her recording company over the album cover. She wanted to use the picture Mapplethorpe took of her for the cover of “Horse”; however the recording company thought her hair was messy and was incomprehensible for that time. In the end the public loved it and it became a famous iconic photograph. Patti Smith was rebellious but also a visionary. In the interview she mentions how her English teacher was teaching Moby Dick in an incomprehensible way.  She saw a way to teach her semi-literate class Moby Dick, better than her teacher and she did just that. And the most obvious was that she was a female in a rock and roll band something almost nonexistent before her. She was willing to express herself. I am sure we all know a bit about Lady GaGa. She is rebellious with the way she acts and dresses. Her music style is different than many other famous stars. She is a visionary who does not mind stepping out of the status quo to chase her dreams. I know that there are differences between the two and that my view could be totally off, but nonetheless, I believe that Patti Smith is the Lady GaGa of the 60s.

Shaun Tan depicts the common immigrant story in the most unique way I have ever seen. Creating a graphic novel without words is so amazing; it really proves that a picture is worth a thousand words. Even before going into the story, I noticed how the book is created like a worn out photo book. Also the inside covers has passport like photos of many different immigrants.

A man leaves his wife and daughter to immigrate to a better place. His hometown is under some kind of danger. The man only has a photo to remind him of his family. He goes by boat to a foreign land. His arrival to the new land reminds me of the immigration stories to New York. There is a statue of two people shaking hands. It is similar to the Statue of Liberty. The statue represents the unity of different cultures because it shows two different men shaking hands. The man goes through countless checkups and questioning before he receives he is permitted entry. He goes around trying to find a place to live with his limited knowledge of the language. What truly helps is his drawings and body language. His room is small just like the old tenement buildings of the lower east side in New York City. He meets other immigrants who share their story with him. Also the immigrants help him around town; they teach him how to use public transportation and what the best types of food are. The man goes around trying to find a job, eventually he ends up in a factory working with other immigrants who he befriends. Eventually he saves enough money to have his wife and daughter immigrate. In the end we see the daughter helping another immigrant that is lost. Immigration is like the circle of life. When one immigrates he receives help from past immigrants. Once he is settles down, he begins to help the new immigrants get accustomed to the land, and the cycle continues.

Tan’s world in the story combines both new and old items. The people’s clothes are old fashioned. On the contrary, the city has futuristic technology not even existent in 2011. There are flying boats used as public transportation and flying mailboxes. The world Tan created does not exist on earth. Tan even created his own language and his own types of animals. I believe Tan does this to show that immigration is a story that can happen to anyone anywhere at any time. I feel that Tan did an amazing job to show such a point. I enjoyed his graphic novel so much, and I believe it truly depicts an immigrant’s journey.

After reading David Rieff’s “After 9/11 : The Limits of Remembrance”, I was shocked that I never thought about the point he was making about how America will eventually forget about 9/11. He compares 9/11 to Pearl Habor by saying, “But how many Americans actually remember the 1,177 American sailors killed on the U.S.S Arizona that day…” From what I recall the only persons that ever brought up the issue of Pearl Harbor on its anniversary date of December 7th were my Spanish teacher and my American history teacher. This fact does lead to believe that Pearl Harbor is slowly being forgotten. Rieff goes on to say that even FDR, a role model to many Americans, did not say that December 7th was a date that would live forever. Therefore maybe even one of our great leaders recognized that nothing truly last forever. After giving his argument some thought I do believe that Rieff is correct. If the catastrophe of Pearl Harbor can slowly be forgotten, why can’t the similar event of 9/11 slowly fade away with time.

On the other hand I was shocked to see Rieff bring up such an idea when the horrible event only happened ten years ago. Although I agree with Rieff’s idea, I do believe it is too early to even mention it. It is only ten years old, and the people affected by it are still coping with it. I understand that people who have similar experiences to Oskar will find such an idea impossible. For example this event has shaped Oskar’s whole life. He was only 9 when his father died, and it has greatly altered his childhood. He is so obsessed with his father that he is willing to travel around New York City, just to find who the owner is to they key. You just can’t expect someone like Oskar to just forget about such a life changing event or even come to the realization of something like this is possible.

Something I noticed in the picture attached in Rieff’s work is that it has a double meaning. It represents the formation of the 9/11 Memorial. The progress of the project is visible as the towers get higher. But it can also represent the fading memory of the event. It could be as if the memorial is slowly fading away.

A question came up in my mind. While I was reading Bloomberg Businessweek, there was a table of Top Costliest Diasters since 1970 and The Top 10 Deadliest Diasters Since 1970, I noticed how 9/11 only showed up once as fourth most costliest disaster. There have been far costlier and deadlier disasters like the 2011 earthquake, tsunami and nuclear disaster of Japan; the 2010 earthquake in Haiti; and the 1970 cyclone in Bangladesh. So why do certain disasters like 9/11 receive more attention than other disasters?