This is a Google map that marks each students locations in the Landscape Analysis Part II assignment. Click here to view the map. For the first picture, I drew Midland beach from the pier. The first thing I did was to darken the picture on Photoshop so the pencil lines would be darker and easier to see.  Seeing how my picture was devoid of life, I added a turtle to it. Because my friend insisted that I add a rainbow to the picture, I made the top part of the sketch invisible. Then, I set the rainbow picture as the sky for the picture. I then added a picture of sand for the beach and an image of ocean water for the water. I decided to leave the rest white because it was the pier and I couldn’t think of a color for pier. In this picture, I used another sketch of midland beach. However, I wanted a darker tone for this picture. So I found a picture of a skeleton and a human skull. I had to remove the background of each picture in order to layer it on my sketch. Then, I found a picture of a brooding red sky, so I added that as the sky for my image. The sand and the water images were trickier. Because I played with the brightness/contrast as well as the hue/saturation, the water turned green at first. However, after messing around with the settings, I was able to get the water to have a reddish hue (I was going for reddish because the sky was red too). The sand was the same. When I first inserted the sand, it was blue. I played with t he settings again and soon, it was also a reddish color. First I took my drawing and then I used alpha channel then I went to the tool box and clicked on the paths tool I then selected the part of the image I wanted. Then I went to select and clicked on from path. After that I went to select again and clicked invert and then I went to cut to delete everything else. I then saved the image as a .png. After that I uploaded a picture I took and then I opened my edited picture of the Verrazano bridge as a layer. I then used air brush to color the sky I also tried painting the water but it didn’t come out as well as I hoped so after I finished I hit undo. After that I found a picture of a seagull and cut it using the same method I did for cutting the drawing of the verrazano bridge. I then added it as a layer and then duplicated it. I then selected the layer and then went to transform tools and then hit move I then moved the images to where I wanted them. I then found a picture of ducks and did the same thing to them Like my previous image I took the first image I drew and cut out the fencing part I drew by using alpha channel and then using the paths tool. I then saved it as a .png and then opened my drawing of the manhattan skyline and then opened the .png file as a layer I then started to color the background using airbrush. I then started playing with the hue’s and saturation when I got this orange color I though it was perfect because it made the picture seem like the sun was setting. I then went to find a picture of a seagull and I found the one with the bag of chips in its mouth and I thought it was perfect because you could see seagulls eating garbage all over the place at the Clifton waterfront. I cut the image just like the previous ways I’ve been doing it and then I opened it as a layer and then instead I selected it and then went to transform tools and hit move and then I moved the image to where I wanted it. I then selected it and went to image and flipped it horizontally. The pictures I drew were of the Upper Bay area.  For this picture I first opened the picture with the boat.  I then increased the contrast of the picture then, decreased the brightness of the picture to make the pencil line stand out more.  I then used the colorization option.  I fiddled around with the hue and saturation until I found a color I thought suited the picture. Next I opened up a new file and outlined the goose using the free select tool, inserted an alpha channel, and then cropped out the goose.  I saved this file as an .xcf file.  I returned to the picture with the boat and opened a new file as a layer.  Once I had the goose on the boat picture, I placed it the position I wanted it in.  I then decided that the goose was too light and didn’t stand out at all against when next to the boat, so I used the paintbrush to to color in the goose.  I then used the dodge tool to smear the color on the goose. For this picture I decided to experiment with the Filters on on Gimp.  After fiddling around with different filters for a while I decided to use two of them.  First I used the Whirl and Pinch filter.  I adjusted the different settings until the I got the filter to the size I wanted.  I then used the Supernova filter.  Finally I used the Colorize option to adjust the hue of the picture to blue. The first thing that I did for this picture is add in some color. I somewhat achieved this by by inserting some blue through the paintbrush. Then I tried to add in an enhancer to improve the overall hue of the picture. Then I added a filter that added in the spotlight, that brightened up the whole picture. This one I started out by transforming it by 90 degrees counter-clockwise. Then I adjusted the brightness of the picture. Then I added in a filter that made it look like it was undeveloped.

My drawing skills were not very good, so while I was trying to edit these pictures I found it very difficult to find ways that would have let me change it. For my waterfront project, I chose Arthur Kill Van Kull Channel to be my location. For the first image, I opened up the picture of the Goethals Bridge as my first layer. Then, I opened up my drawing of the Goethals Bridge, as the second layer. After doing so, I edited my drawing by first sharpening the image. Then I used the edge-detect option, so that my drawing would stand out. This automatically gave me the black background of my drawing. After doing this, I cut the right half of my drawing, and pasted it on top of the first layer. I also thought that the dark and light background, and could represent the bridge during the night and the day. In short, the first image is the picture of how the actual Goethals bridge looks during the early hours of the morning, and my imagination of how the bridge would look at night, with all the lights lighted up. The second image is the look of Manhattan from my waterfront location. My initial drawing was very blurry, and barely distinguishable. I first opened up my image on Gimp, and then used the sharpen option to make the drawing to be better understandable. Then I used the painting tools, which included smudge and paintbrush, I tried to apply an artistic touch to it. Then I also chose the option of colorizing to change the hue, saturation and the contrast of the picture. Although I did not like it at the first glance, when I compared it with my initial drawing, I realized that there was a huge difference between the two. For my first picture I tried to blend both my first drawing and picture of the same location, which was near the Staten Island ferry. I copied several objects such as the water from the photo and pasted them as new layers into my drawing. From there I used the move, transformation, and scale command to fit the layers together, and I used the transparency slider to blend the images. Finally, I altered the contrast, increased antialiasing, and added lens flare to make the image more dramatic.

I applied many of the same techniques from my first picture to my second. I took images from my photo such as birds and the sky and blended it in with layers, using the eraser tool when needed. I achieved a slightly different look by playing around with filters, such as cartoon. Like the first drawing, I also added lens flare, altered contrast, and raised antialiasing. 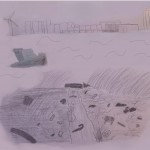 For the first picture first I cut out the parts from my three sketches that would be used for the edit and separated them into 3 layers. I added an alpha channel to each one so I could impose them on each other’s backgrounds. Next I scaled down the boat and the background in order to give a better perspective of size. I then positioned the objects. I added waves and finished the picture with some touchups using the airbrush.

For the second picture I began by opening up the sketch. I then added the photograph in another layer. The sketch was given an alpha channel in order to prepare it for merging with the other picture. I cut a large piece that represents the sketch from the photo. Lastly I cropped the picture. 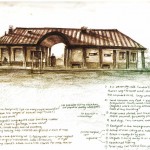 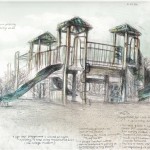 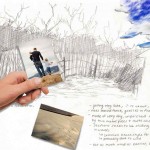 The first thing I did was open the picture of my drawing. I then opened my picture of the Great Kills Waterfront. The picture I drew was based on the picture. Then, on the layers window, I went under mode and chose soft light which blended the two together. For this I first opened my picture of the waterfront. I then opened my drawing as another layer. I turned on Alpha channel and I had to crop my drawing because it was a little big. Then I used to moving tool to center it. I then went onto the layer window under mode and chose gradient merge and it merged the two pictures nicely so you can see both the bridge and my drawing.