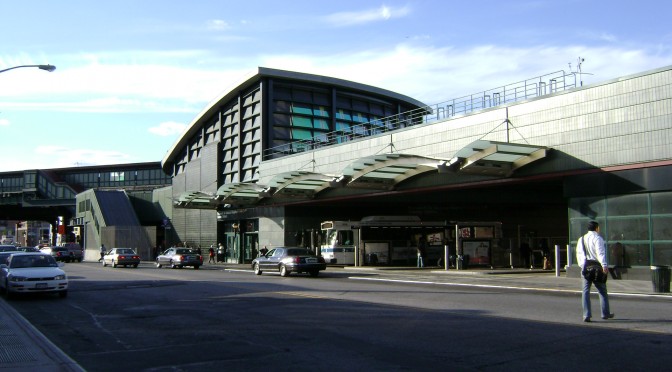 Welcome ladies and gentlemen, boys and girls to the neighborhood of Jackson Heights, where apartments are a plenty and the immigrants too. This 20th century neighborhood has evolved over the years since its first development. Today the diversity among the immigrant population currently residing in the area reflects the multiethnic culture of Queens. But enough of that, you’re interested in Jackson Heights and our first stop is the Delgado Travel Agency. Thank you for traveling with us! Credits to the following people, this walking tour would not be possible without them!

The Community Church website which has individual pages in different languages catering to its various ethnic groups is a good resource which details the church’s illustrious history and promotes the main mission of the church–to unify the diverse neighborhood of Jackson Heights through faith. The website also announces upcoming events from prayer services to charity fundraising functions color coded according to the language pertinent to the cultural group to which the event is aimed. In addition there are listings the Chinese, English, and Spanish schedules for each respective service.

The work of previous Macaulay Honors students is the best source possible for cultural studies. Especially since students with the same assignment in the past provide accurate facts in a clear manner. In this case, the student neighborhood website project provides a detailed history of the transportation for Jackson Heights residents. Starting from the early use of trolleys to the development of train extensions, the site continues on until around 2000. At the end of the article the MTA plans to renovate the Jackson Heights Roosevelt Avenue station to make transferring between the buses and trains easier. This renovation was completed later on in 2005, therefore the site is not up to date on the more recent improvements of the station. Regardless, the site does give a thorough history of the transit system of Jackson Heights.

This site is our best source of information about the Consular Agency of Ecuador. It lists the various services that the Centre provides, including but not limited to: English classes, Youth and Development Programs, Cultural Activities, Public Health Education, deportation and passport issues, etc. The Ecuadorians take good advantage of the services that the centre provides and is therefore a very good organization for the further development of the society.

This article is quite informative in terms of the history of Jackson Heights. It provides statistics from 1960, 1970, and 1990 to show how the demographics of the area has changed between those years and how living in that area changed as well. The article states that in 1960, the area was 98.5% White, in 1970 is was 87.4% White, and by the 1990’s it was 39.8% White, 41.3% Hispanic, and 16% Asian and other. It also provides specific cross-streets so one knows exactly what parts of Jackson Heights they are discussing and see the facts discussed firsthand.

This article goes into depth about the history of Jackson Heights and its gradual progression towards becoming one of the most commercially diverse places in the country. The development of the community, the housing plans, the garden city developments, and the ethnic transformation are all talked about in detail, which range from the establishment of Jackson Heights to the recent years. The development of churches, along with the The Community Methodist Church which is included in our walking tour is talked about in this article. We are informed that the church was first built to serve the spiritual needs of non-hispanic white Protestant population, but gradually opened its doors to the Hispanic people as well. The author also talks about the Ecuadorian company “The Delgado Travel Agency”, which is one of the largest travel agencies, and which has expanded and opened up offices in several parts of the New York City; as well as the “Casa de Cambio”which facilitates currency exchange for resident and visitors.

This journal focuses on the general immigration of Latin Americans to New York City. The study focuses on the real estate aspects of Hispanic groups as well as the social interactions between the groups. Ecuadorians are often mentioned together with Peruvians and Colombians with only statistical facts in the diagrams and charts separating them into individual groups. However, the journal hints at certain prejudices among different nationalities such as a combine distaste for Mexicans and low class Hispanics. While the source is pretty old and maybe outdated, overall the source does provide a broad study of Latin American immigration.

This website contains the history of Ecuadorian immigration to US as a whole. However, it does mention New York specifically, referencing the fact that “60 percent of Ecuadorian immigrants lived in NYC”, according to 1990 census data. Sub headings in this article include: History, Geography, Acculturation and Assimilation, Cuisine, and more. In addition,  all sources are cited and contact information for various Ecuadorian related groups in New York City are listed, such as Comite Civico Ecuatoriana, which is actually located in Jackson Heights.

This newspaper feature describes the opening of the new Jackson Heights Roosevelt Avenue station. While the entire station was getting renovated, this feature story focuses on the visible changes on the exterior of the station, the most important of which is the new bus terminal. The benefits of the new terminal: ease of transfer and handicap accessibility will decrease passenger travel time, a benefit to all. This article focuses on a specific moment of the subway station’s history that is visible today.

The article traces the “majority minority” phenomenon in the United States with the white majority becomes increasingly less influential as population of those with European ancestry is projected to fall below the 50% margin. The author, through  ethnographic fieldwork, focuses especially on the Corona-Elmhurst-Jackson Heights neighborhoods which were notably 98% white in 1960 but progressively became more ethnic and multi-racial as it approached 1990 with the arrival of the Chinese, Latin Americans, and African Americans. The article dedicates paragraphs to this change and the gradual takeover of each individual culture and their mark on the neighborhoods.

The article announces the grand opening of the new branch of the Ecuadorian consulate which moved to the Jackson Heights neighborhood where the largest enclave of Ecuadorians reside–more Ecuadorians live in this area than immigrants from any other Latin American country. The consulates unusual schedule (It operates from Sunday to Wednesday) is aimed to accommodate the schedules of those who may seek the services offered. Representatives hope that by removing the imposing, intimidating security guards, unnecessary elevators rides and ID checking, and the elimination of a lengthy subway ride to Manhattan, the Ecuadorian consulate can be of more service and more accessible to their target audience.

In prior research, we found that during the economic downturn, immigrants from Ecuador actually returned to Ecuador because there were few jobs available in New York City. In this article, the pros and the cons of return migration to Ecuador are weighed. Although it may be hard for illegal immigrants to find work and money in the US, conditions are worse in Ecuador, where the economy has weakened. However, in the US, immigrants are away from their families. Although some want to return, it is not feasible because they do not have the necessary funds. Through this article, I am able to gain insight into one of the many struggles Ecuadorian immigrants face. In addition, City Limits is a non-profit newspaper based in New York City that focuses investigate reports on urban life, which will give us an insight about the lives of not only Ecuadorians, but all those who live in Jackson Heights.

This NYC Parks website is a very good source of information about Travers Park and its history as well as its present day influence on the community of Jackson Heights. The transformation that the park underwent in recent years is documented in detail through this website. For Example: new spray showers, trees, benches, picnic and game tables, security lighting, and play equipment for tots and older children were added. The facilities are a good method of bringing the neighboring communities together, including the Ecuadorians, the Indians, as well as the of the HIspanic community since they all live in this neighborhood and are likely to use the park’s facilities.

The article only briefly discussed how Ecuadorian heritage month was celebrated last year, with not as many photos, or details as I expected. The celebration occurred at the New York Hall of Science with South American food and dances, “awards to prominent Ecuadorian-Americans. It mentioned the appearance of “Fátima Ptacek, the voice of “Dora the Explorer,” and Susana Cortazar, of the Ecuadorian Consulate in Queens”. Interestingly, the event was put together by the U.S.’s first Ecuadorian-American democrat to be in office, Assemblyman Francisco Moya.  Despite the article’s brief description on the event, it was still a helpful source as I was completely unaware that there was an Ecuadorian History month, or that it was held at the popular New York Hall of Science in  Queens.

This article focuses on the availability of Ecuadorian food and how it relates to nostalgia in the Ecuadorian community, specifically in Queens. In addition, interviews of various Ecuadorian men are included as case studies. According to the Ecuadorian Consulate, the Ecuadorian community in NYC is fluid, and its precise population is unknown, because most immigrants are illegal. With this constant motion, immigrants usually look for staples that remind them of home, such as Zhumir, which is an alcoholic substance that can be used for almost anything in Ecuadorian culture. One man, Roberto, eloquently states there are three types of Ecuadorians: those who assimilate easily, those who can assimilate but with difficulty, and those who cannot assimilate for various reasons. The ones who cannot assimilate seek to find comfort in Ecuadorian food and drink. Since food and language are what makes a culture unique, many people find their roots in their food. This article was enlightening; not only does it reveal quite a lot about Ecuadorian life in NYC, it also reveals a lot about how people in general relate to their cultures in regard to food.