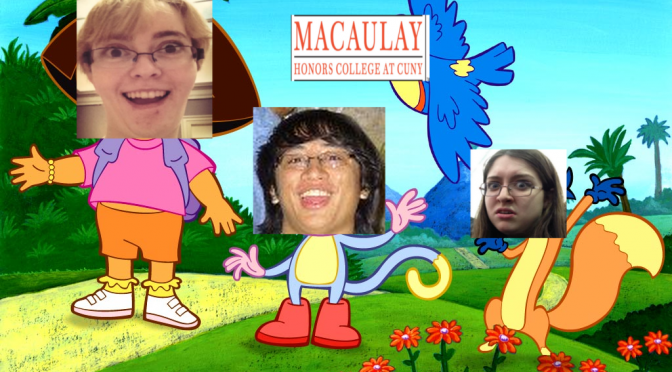 Welcome to Sunset Park! This place has gone through so many ethnic changes throughout the years, but has ultimately become a home to a large Mexican and Chinese community. We’re here to talk about the Chinese immigrant part of this neighborhood, so let’s go! Follow us on our audio tour. Hopefully nothing goes wrong.

For more information see these references:

This article explores the funeral and burial practices in Chinese cemeteries. One of the practices discussed is the placement of the bones of the dead into an urn and then moved to a location with good Feng Shui. Green-Wood Cemetery, with an entrance located in Sunset Park, just opened a new urn garden. This article helps to make the connection of the Chinese population in Sunset Park and the creation of this new urn garden.

This article is an in-depth analysis of sweatshops in New York City that exploited the labor of Chinese immigrants; while the idea of a sweatshop might evoke thoughts of the late 1800s and the industrial revolution, sweatshop labor has occurred as recently as the 1980s and 1990s in New York City. As Sunset Park amassed more Chinese immigrants, the number of sweatshops in the area grew. This article examines multiple shops in Sunset Park, provides interviews with laborers, and discusses the cutthroat nature of the garment industry.

This is the “about us” page of the Brooklyn Chinese-American Association. Not only does it provide the history of the association itself, it also talks about the Chinese inhabitants of Sunset Park. It talks about the depletion of the scandinavian population that lived in Sunset Park before the Chinese residents. It shows the convenience of Sunset Park’s location, and also the promise that 8th avenue had for the incoming Chinese population. It talks about the social and cultural implications of life in that area of Brooklyn. At the end of the page, they link all of their services and programs for the community for both young and old members of the neighborhood. This “about us” page does a great job in providing information of the history and culture of the Chinese immigrants in Sunset Park along with information about the organizations practices.

Green-Wood Cemetery is one of the first rural cemeteries in the United States and one of the most popular (as well as a National Landmark). One of the many entrances to the cemetery is located in Sunset Park. This page of the Green-Wood Cemetery website explains all of the cremation possibilities offered at Green-Wood. One of these possibilities is the urn and the urn garden, which was recently built. The use of urns is one of the key factors in Chinese burials. Therefore the creation of this garden and the fact that urns are sold by the cemetery (as also advertised on this page) can be traced to the Chinese population in Sunset Park.

This short story paints the picture of a Chinese immigrant’s  journey to America and his life in New York. It describes the conditions that he, “Jon,” had to endure on his way to America as a smuggled laborer. Having a choice of whether or not to carry heroin and being taken straight to the United States or being dropped off outside of US borders without heroin, he chose not take a bag of heroin and made his way to New York smuggled in a bus through the Mexican-US border. Although this story isn’t mainly set in Sunset Park, it discusses some things that many Chinese immigrants have experienced in order to come to America. It also describes working life of a Chinese immigrant, mentioning the many jobs “Jon” had only to have a major portion of their money go to the smugglers he owed.

Girl in Translation is a novel inspired by the events of the author’s own immigration to America. The protagonist, a young Chinese girl, moves to Brooklyn in 1997 and is faced with crushing poverty and cultural impediments on all sides. Each day, after struggling in school due to the language barrier, she is forced to work in a sweatshop with her mother just to make ends meet. She resolves to learn English and succeed in school so that she can make a better place for herself and her mother in America. Although the book is a work of fiction, it gives a glimpse of struggles that Chinese immigrants in New York City have, and the inhuman exploitation of immigrant labour in the garment industry in Chinese districts across the five boroughs.

Li, Wei. “Beyond Chinatown, beyond enclave: Reconceptualizing contemporary Chinese settlements in the United States.” GeoJournal. 64. No. 1 (2005): 31 to 40. Print.

This article discusses the changes the trends of Chinese Immigrants to the United States. It examines the events in the United States such as the Chinese Exclusion Acts, how these restriction were lifted, and the prejudice that existed towards the Chinese immigrants and how all of this affected the enclaves, caused gender imbalances, and changed the actual appeal to move to the U.S. It also discusses the changes in the types of enclaves, from suburban, to the ghettos, to Metropolitan areas. This article gives a good general overview of these push and pull factors of the many Chinese enclaves on the United States, and though Sunset Park is only mentioned briefly, this article’s explanation for the trends in these enclaves applies.

This page on the Maimonides Medical Center website provides a 100 year timeline with major events of the hospitals history. It encompasses the hospitals history from its origins in New Utrecht to its centennial anniversary. The timeline talks about the hospitals Maimonides Medical Center has merged with while still keeping its services to the poor and needy despite religious views and ethnic differences. It also talks about the medical advancements the hospital has achieved, along with the establishment’s growth. Just click on a date and a small history will be provided to discuss specific histories of that year. A history of outside events are also provided, starting with the sinking of the Titanic, to put in perspective the history of the hospital. This a great source to view the hospitals general history.

This article examines the roles city planning and non-profits play in mapping out East Asian neighborhoods. City zoning accounts for low-income housing, low population density, diversification of jobs, and wide areas for community meeting places and public festivals. It examines the delicate balance between city standards and comfort and sanctuary for non-English speaking residents, and how city planning develops neighborhoods within its borders that meet both of the requirements. Sunset Park was developed in a fashion similar to the one outlined in the article: the amalgamation of Chinese culture with New York City neighborhood standards created a neighborhood with a distinct infusion of Eastern culture and Western infrastructure.