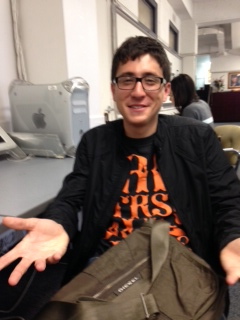 In 1997, amid economic turmoil and religious prosecution in the Soviet Union, a two-year-old Leonid Guzman and his family made the decision to start anew in America, braving the difficulties of a shockingly different culture to thrive in New York City.

Why We Decided to Come

Originally we immigrated under the status of religious refugees since we were Jewish and there was a tradition of anti-Semitism in Ukraine. We applied for a to be sponsored by an evangelical church in Manhattan. After the collapse of the Soviet Union, there was a lot of economic problems in Ukraine so it was hard to get a job and it was hard to get good money. A lot of our family friends, they immigrated earlier than us, and most of them came here to New York because this is, I guess, the big hub for immigrants. We knew we would be able to get settled and they heard back in Russia that New York was the place you had to be if you wanted to get a job, you wanted to get a career, if you want to have a family and a home. From what they heard in Russia, this wasn’t the best place to be, you know… because they also came here from a Cold War childhood, so they were used to hearing bad things about America, but eventually a lot of our friends convinced us that this was…that you could get a job here, get a career here. It was also that we had some distant relatives here and things like that, you know. And you just couldn’t live anymore in Ukraine; it was just so bad that any place would have been better.

My dad was a civil engineer, but after the collapse of the Soviet Union he did different jobs, you know, to earn money. And my mom, by profession, she is a chemical engineer. My mom of course doesn’t work as a chemical engineer; she works in a medical office. But my dad managed to… over time- first he was a waiter, then he worked in computers- but eventually, he managed to get back to his old job, so now he works as a civil engineer. When we came, we came to Brooklyn because that’s where all our friends were, and I remember when I was young, I was crying all the time because the time difference, because I was used to sleeping at a different time, and my parents would walk around and look at different apartments. Of course, they were just looking for a cheap place they could stay at, and they actually found this place on Avenue U. The place was really small, I think it was like a one bedroom house, so we lived there and we lived in it for some time. Then we heard about an apartment in Sheepshead Bay, and we moved there. We still live there now. When more relatives from Ukraine had came, they all lived at the apartment so that when I was four or five we had at least twelve people living at this apartment. I loved it because I was little, I didn’t understand. I had all my relatives there and I was happy about that. For them, I’m assuming they didn’t like it too much, but eventually an apartment opened up in the same building, which they took.

I learned English in kindergarten. The language was hard, even for me, even though I was really young. When I went to the park, or with my friends, I spoke Russian, but when I had to go to school, I had to speak English. At first I didn’t understand the language, and my teachers obviously didn’t speak Russian, so they didn’t know what I wanted, and I’d be crying all the time and throwing tantrums. For my parents it was even harder because they had to go get a job and speak English, so they had to attend night classes and to learn the language. But we had friends, so we weren’t the first people to leave; we weren’t even the first people in our family to immigrate. We knew people who’d done it and we were coming to a place where people still spoke the language. We were coming to a Russian neighborhood. So in that case it was easier than if we had moved to someplace where they weren’t any Russians, there was no family, nobody waiting for us.

Living in a Russian Enclave

The first six or seven years here in America, all my friends spoke Russian, all the friends we met were Russian, so we kind of lived in this Russian bubble. My dad works in Manhattan so he became more assimilated, but my mom works in a medical office in Brighton Beach, so she still speaks Russian pretty exclusively. My dad has a more American perspective on things, and my mom has a more Russian perspective. I think Russians can be very racist, can be very homophobic, and Russians who have dealt with Americans can lose these traits because it’s not tolerated in American society as much as it is in Russian society… so I feel the problem with the enclaves is that people don’t assimilate and they stay with their ideals. We recently had relatives from Israel visit and they said that being here felt like being back in the Soviet Union, there’s no different. I think assimilation would help the community.