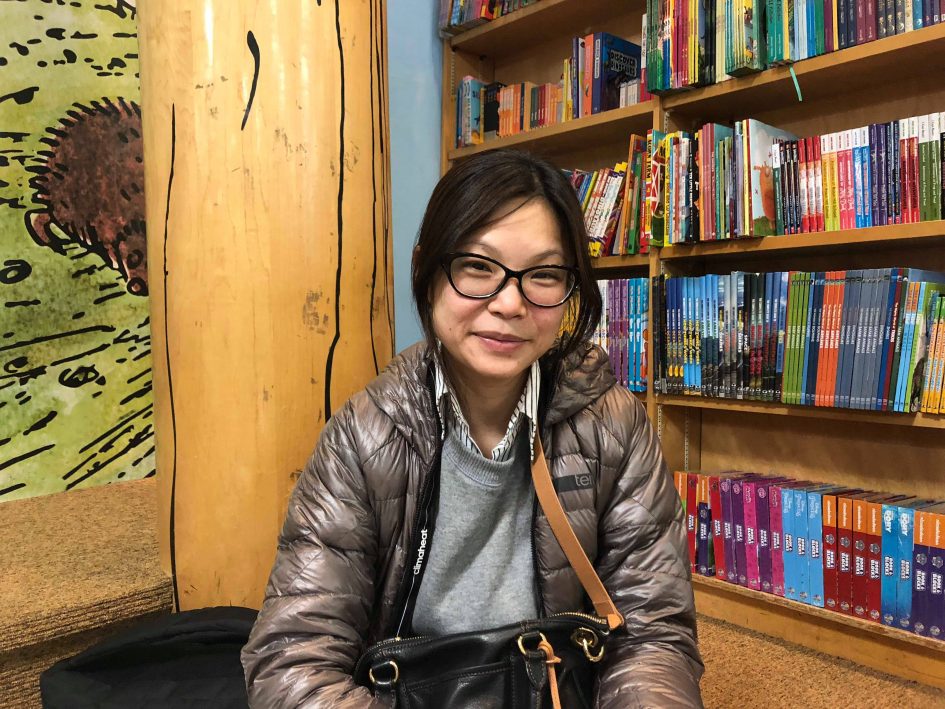 Sitting in the cafe section of the Barnes and Noble in Union Square, looking around the room was like looking at a microcosm of New York City. The students, the nine-to-fivers, the tourists, the homeless, the young, and the elderly were all gathered in this space, coexisting but not exactly mingling, and this is just how my interview subject liked it.

Jenny Ngeow, my mother, had only a decade ago sat where I was, as a student of Baruch College. She had spent hours in places like this, in libraries and bookstores throughout the city, where people collected together but still kept to their personal worlds. This is how she had navigated the city, as a teenage, Chinese-Malaysian immigrant.

In Malaysia, Jenny moved around fairly often, living on a mountaintop and in a suburb she described as “much like Brooklyn,” the borough she lived in when she immigrated to the United States and continues to reside in today. Back in Malaysia, she spent some time living in the suburbs with her uncle and aunt, because at this point in her life, her parents were kept busy by their jobs in the city, Kuala Lumpur. A few years later, her parents moved to the United States for work, again leaving her under the care of relatives.

As she moved from place to place, Jenny life was slightly altered again and again, especially her schooling, which was a big part of her life as a child. At her very first home in Kuala Lumpur, Jenny attended an all-girls primary school, which she does not remember much of, but she still has a few faded photos of her and her peers dressed in matching blue uniforms. While living in the suburbs, Jenny attended a Malay school, and when she moved to the mountains, she went to a Chinese school.

The branches of the school system reflects the diversity Malaysia’s population. According to a 2018 demographics profile, 61.7% of the population is indigenously Malay, 20.8% is Chinese, 6.2% is Indian, 0.9% is other, and the remaining are non-citizens. Looking at the religious breakdown, 61.3% is Muslim, the official religion of Malaysia, 19.8% is Buddhist, 9.2% is Christian, 6.3% is Hindu, and the rest compose of other traditional Chinese religions or are other/unspecified.

At the Malay school, Jenny was exposed to religion and culture that differed from her own. At home, her aunt and uncle practiced Christianity. Jenny went to Sunday school and church. In the household, there was no swearing, nor music being played, with the exception of Christian songs. As a result, Jenny didn’t listen to music, even when she moved to the United States.

The Malay school is different from the vernacular school in a few ways. It primarily teaches Malay, the national language, so even though Jenny was racially Chinese, she didn’t learn to speak it at school. The school was co-ed and all students wore uniforms. Most of the student population was Muslim, so there was an allotted prayer time during which students of other religions had moral classes, learning the importance of things like cleanliness and obedience.

Jenny moved to mountains because her uncle had to move back to the city to help take care of another family member’s children. She lived with other relatives and attended a Chinese school, and she had to adjust to the new environment.

Because Jenny didn’t speak much Chinese, she would sleep during her Chinese class, which her teacher noticed. She was sent to back of the classroom, to prevent her from being a bad influence on the other students. At the Malay school, Jenny had unknowingly acquired some habits. She once overheard her teachers wondering why she always wore long sleeves during gym, and she realized that while longer sleeves were encouraged at the Malay school, where the majority of students were Muslim, short sleeves were more accepted at the Chinese school.

From attending the two kinds of schools, Jenny experienced new cultures. The fact that she was young perhaps made her more open and at the same time oblivious to racial tension. When she was little, she used to go over to her friends’ houses for holiday dinners, without thinking of the racial or religious differences, but that eventually stopped. “Back when you’re young, you are much more friendly, I guess. Once you’re older, you kind of stop that,” she explained.

Jenny’s education in Malaysia ceased when she moved to the United States. Her parents had saved up enough money to bring both their children over. They worked hard in order to achieve this. When they first arrived, they lived in Chinatown, in a room of bunk beds filled with other immigrants.

This living set-up, called “shift beds,” is an ongoing phenomenon. It is rarely talked about, as it exists under the surface of most people’s realities. New York has a law barring more than three people living together in one space, so shift beds are illegal. However, with a rent of $100-500 per person, it’s often all people can afford.

Despite their initial struggles, the parents met their children in California on visas, where they all visited iconic American places, like Disneyland and Hollywood. After watching American television shows like Beverly Hills, 90210, Jenny was now in America.

The family eventually flew to New York, and the children overstayed their visas. However, any child had a right to public education, regardless of status, so Jenny was able to enroll in high school as a freshman. She was at the sophomore age, but her father worried she wouldn’t be able to keep up.

Jenny attended John Dewey High School, which was near her rented two-bedroom home on Avenue U. It was a nice neighborhood, which her mother made sure of when she picked the house. At the time that Jenny lived there, the neighborhood was predominantly white, but in current times, the majority of its population is Chinese.

In her freshman year, Jenny easily acclimated, since she learned English at school while in Malaysia. She even found it too easy, remembering her first English as a Second Language class; “The teacher was teaching the ABCs, and we were in high school. I was like, ‘Huh?’” she said. There were other students in her class who didn’t even know how to write their names, and they benefited, but for a student who had studied English already, it was a shock.

High school in the United States differed from school in Malaysia. According to Jenny, Malaysia was more textbook-oriented. Teachers cared about the answer, not how the student got to the answer. “My first history class [in the U.S.] was very different. In homework, they ask all these ‘Why, why, why, why, why?’ questions. I’m like, ‘Why are these so many ‘Why?’s?’” she recalled. In Malaysia, students only listened to the teacher; there was no participation or hand-raising like there is in the United States.

Students were separated into classes according to their academic ability in Malaysia, different than in America. Jenny was in the “A” or top class, and she was even a school prefect, a volunteer who took care of the school. She would spend her lunch period “at the field guarding the bicycles, just standing there. That was funny,” she remembered.

At John Dewey, there was more of a mix, where students of varying levels learned together, as seen in Jenny’s first ESL class experience. She made friends with mostly Asians, because her of English speaking proficiency, or lack thereof. Even though she had learned English in Malaysia, she couldn’t speak it very well. “When you don’t speak a language well, you usually don’t go out and try to befriend people who do,” she explained. Her English is still not perfect, decades later. “Three syllable words – I can’t pronounce them,” she said. Because of Jenny’s citizenship status, she could not get financial aid for college. Her college education was expensive, even back then when tuition was cheaper, even at Baruch College, which is a public school. She also couldn’t apply for many jobs; however, she did make money in high school working off the books at her friend’s nail salon.

Jenny became a citizen after she got married. Her husband, also an immigrant but with citizenship status, sponsored her. She became a permanent resident before becoming a full citizen and becoming sponsors for her parents, who eventually became full citizens as well.

While she was in school in Malaysia, she only went to school and went home, so she didn’t experience much homesickness. Her daily life in New York was similar to the life she had. In college, she had a child (me!), so she went from home to school and straight back to take care of her daughter. She spent much of her time at home and was happy to do so. For fun, she went to libraries and borrowed an entire tote bag worth of books, and years later, her daughter followed her example. She went to all of the libraries in her neighborhood.

Now, she works as an accountant in Columbus Circle. She commutes to Manhattan from Brooklyn every day, but she is more of a homebody than anything.

Despite her love for staying home, her favorite part of the city is its transit system and how easy it is to travel. And at the same time, it’s her least favorite part, a feeling which many New Yorkers can relate to.

When asked if she would choose New York again, Jenny hesitated, listing other countries like Singapore, Japan, and even Malaysia that she would live in. She certainly is not unhappy here, but she looks at these Asian countries, and “compared to here, being Asian, people might still look down on you,” she said.

Jenny’s story is not the stereotypical “New York story.” She doesn’t glorify the city. She did not come here to achieve her dreams of making it big, she did not come here to make money for family at home, nor did she come here escaping persecution. Her immigration here was much more passive, and though this does not as make a great a story others, it is still important to remember that the working class people who came here looking for the American dream had children. Thanks to their sacrifices, their children could worry about schooling and higher education instead of putting food on the table or finding a place to live. Jenny is not alone in this category, and I believe that my grandparents’ American dream is best epitomized by the successes of their children, my mother.