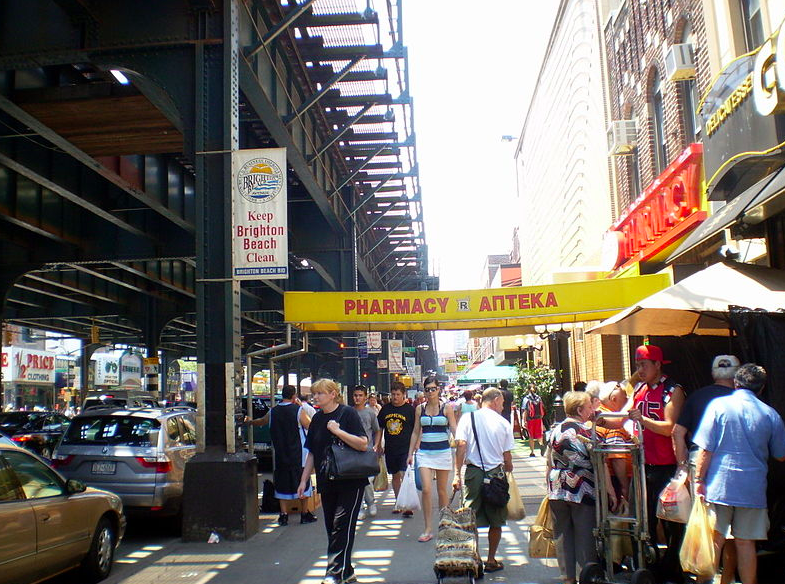 Eddie expresses disbelief at how much I’ve grown, reminiscing with me about the Christmas cards showing my sister and me smiling side by side that he’s received from my mother since I was just a baby.  They’ve made him feel old, and when I tell him my sister will be celebrating her sweet sixteenth birthday in the coming months, he does not feign his awe at how the time has gone by.  He can’t believe I’m old enough to be asking him for help with a project for my college class, he says, but he would love to tell me his story.

At the age of just sixteen, Eddie left Ukraine in the Soviet Union for Brooklyn, New York at the discretion of his parents, just three of the approximately 23,000 Soviet immigrants that came to New York between 1978 and 1980.  All they knew of America was Soviet propaganda – including the constant threat of an American nuclear attack – but to them, the unknown was nothing in comparison to life at home.  The family left Ukraine for America in search of a better life for their son – in which being Jewish and being successful did not have to be mutually exclusive, and in which your quality of life was a direct result of your hard work.

In the Soviet Union, opportunity directly correlated with religion.  While the antisemitism that existed in Ukraine was not outright at the time Eddie was growing up, a prominent undercurrent existed throughout the Soviet republic.  A religious affiliation was not something one could hide either.  Just as we have driver’s licenses now as one of our primary forms of identification, Eddie explained, those who lived in the Soviet Union had passports stating their name and the republic they came from, along with a section set aside denoting the religion of the passport holder.  A system like this ensured that Jewish people could not hide among their neighbors and practice their religion unbothered.  This underlying prejudice made it difficult for those who practiced Judaism to do things such as be accepted into institutions for higher education or be offered a job interview.  “If you wanted to get into a higher education school, it was almost impossible [for Jewish people] in one of the main cities to be accepted.  Jewish people, if they wanted to get higher education, would have to move into the boondocks to get into any higher education schools,” Eddie explained.  He continued, “They would do things where they would fail your tests, change your answers, and there was no way to prove it.  Even if you got the highest score, they would manipulate it so it looked like you failed, or you tried to cheat on the test.  People knew that if they wanted to get somewhere, they would have to go to the outskirts [of Ukraine].”  This was one of the main factors in the decision of Eddie’s parents to leave in search of a better life for their son in America.  Even for those who were not Jewish and could easily obtain higher education or a job, things in Ukraine did not come easily.  In the Soviet Union during this time, the private sector was nonexistent; people worked only for the public.  Success and hard work were not correlated in a direct relationship; a person in Ukraine could work three different jobs to provide for their family or purchase a car and never see the fruits of their labor.  It was for these reasons that Eddie’s parents decided to pursue a life in America, leaving everything they knew in search of a life where their son could attend college, secure a job, and work to build his future.

The journey to America was not an easy one.  Eddie admitted that many people who wanted to leave were denied for years by the government and that once permission finally was granted, immigration was a multistage process in which one had to stop in multiple countries and go through each of those countries’ immigration processes in order to finally reach a final destination.  Eddie’s family first stopped in Austria and spent ten days there having paperwork processed before taking a train to Italy to have more paperwork processed, their final stop before New York.  The arduous journey, however, was worth it.  When he arrived in John F. Kennedy International Airport, Eddie was a sixteen-year-old boy coming from a country that had nothing.  Nobody told him America would be the “land of opportunity” – in fact, America was a forbidden topic in Russia, but according to Eddie, it’s something he could feel from the moment he arrived.  “It’s like air.  You breathe in and you say, ‘oh my god’.  You just know it.  You see people on the street, and [you know] they’re free.  You can sense it.”  The minute Eddie left the Soviet Union, he was happy, and the minute he arrived on American soil, he claims he felt at home.

The Zhubraks made their new home in Brighton Beach in Brooklyn, as did many other Soviet immigrants at the time.  The high influx of immigrants all from the same Ukrainian town of Odessa gave the Brooklyn neighborhood the nickname, “Little Odessa”, or “Little Russia by the Sea”.  Despite Eddie’s excitement at arriving in America, the transition was not without hardship.  First living with his uncle, the family had to scramble to work, taking any jobs they could get.  The following August after his family’s arrival, Eddie was enrolled at CUNY Brooklyn College.  While focusing on his schooling and learning to speak English, Eddie used whatever free time he had to work.

For the first three years in America, day to day life was a challenge for the Zhubrak family.  Each day, Eddie woke up at five o’clock in the morning, worked at a fruit and vegetable store as the sun rose until approximately eight o’clock, went to school, and then if there was still time, went back to work and worked the closing shift until six before going home to do his homework.  His weekends were not much different than his weekdays – mostly spent working full days and doing homework at night.  Much of his income went to his family, one of the biggest challenges being to help his parents scrape together just enough money to pay the bills, along with fighting to keep up his grades and rapidly learn English.  Free time was certainly not plentiful, but in Eddie’s opinion, that’s what immigrants do – work hard.  “If you want to get somewhere, you have to work harder,” he told me.  What little free time Eddie had was spent strolling on the boardwalk at Coney Island with his family, among a community of Ukrainian immigrants all speaking their own language, some selling authentic food or goods and some reuniting with friends they hadn’t seen since they left home.  The sounds of his native language, the ocean breeze and the familiar rush of the waves made him feel even more at home in an environment that, while wonderful, was still an adjustment.

Despite his hardships, Eddie remained grateful for his parents’ decision to start a new life in America.  For him, the abundance of basic things and the ability to work for what he needed along with the freedom to do as he pleased, such as go to school or get a job with no roadblocks, was more than enough to be grateful for.  “To be able to go to a market and buy anything you want was overwhelming.  In Ukraine, everything was restricted, from food to clothing.  Basic needs. […] I had one pair of converse sneakers in Ukraine.  I used to wear them until I got a hole in the bottom of my shoe, and then I got a new pair of shoes.  Not because my parents didn’t want to do anything about it; we didn’t have the resources.  Everything was limited,” he said, adding that his children do not understand how lucky they really are.  “For all the problems that we have, we are still in the best place,” he said confidently.

To someone in the same position he was in forty years ago arriving in New York for the first time, Eddie’s message is short and sweet: don’t get discouraged.  “You might think that you don’t have the advantages of other people who were born here, but that is not true.  If you work hard, you can get there.  It doesn’t matter if you’re an immigrant or not,” he said, adding that simply being a good human being and working hard will take you to the right place as an immigrant arriving in a new place, whether it be this city or another.  This “do good and good will come to you” philosophy translates seamlessly into how Eddie views his next few years, now living in Staten Island.  Asked what he believes his future holds for him in the city, he immediately responded, “Nothing but good things.”  The negative is something Eddie refuses to pay attention to, choosing to be an optimist and focus on striving for what he believes everyone is working toward in life – to love and have people who love you, and to support yourself and your family.  He reminds me that while some things might be bad, the city gives you the best opportunities you can get; you just have to know how to see them and enjoy them.

When I announced the final question an hour after the start of our interview, Eddie was surprised.  “That’s it?” he asked, interrupting me.  It was clear he could’ve talked about his beloved city for hours to come.  Though Eddie’s journey to Brighton Beach and first few years in the city were a struggle, it is clear how grateful he is to have built his life here.  “Fill in the blank,” I said, “My New York is…what?”

Without missing a beat, Eddie answered simply, “My New York is my home.”

Lewine, E. (1999, March 14). From Brighton Beach to America; The Wave of Immigrants Began 25 Years Ago. Soon Russian Filled the Streets. Now, the Tide Is Ebbing. Retrieved April 22, 2018, from https://www.nytimes.com/1999/03/14/nyregion/brighton-beach-america-wave-immigrants-began-25-years-ago-soon-russian-filled.html