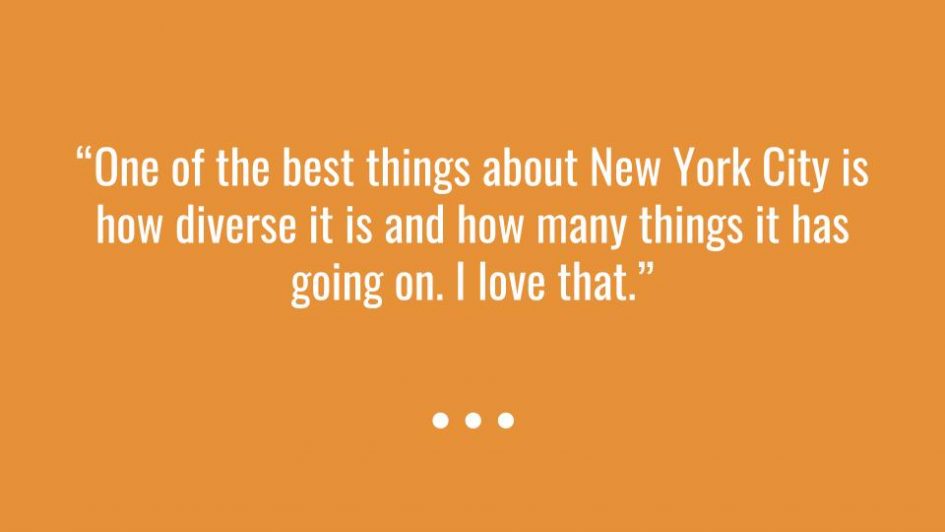 Ethan, a now 19-year-old freshman college student from Hunter College, originally came from Carmel, Indiana, a small suburb outside of Indianapolis. He is currently studying Law and Mandarin Chinese, and is part of the Chinese Flagship Program. When he graduates, he would love to work for the State Department as a Foreign Service Officer. For Ethan, it was a major change in lifestyle to move from a small suburban town to one of the most renowned cities in the world, New York City. He enjoys being in the city, enjoying its fast pace, energy, and diversity. He loves exploring all the the city has to offer, especially when it comes to the wide array of food. He also loves interacting with the people of New York City and has adjusted really well to urban life. Coming up with major issues or least favorite places in the city was rather difficult for him during the interview. He looks at New York City in a positive light, and it has been a life-changing experience for him.

Ethan really liked New York growing up, as he had already taken trips to the city to visit his uncle who is a resident here. However, he was not as familiar with the city as when he officially moved to New York to attend college. His trips to New York are actually what encouraged him to apply to college in New York City; he got what he wished for when he was accepted into Hunter College. Ethan discussed in his interview how he has always had the cliché misconception of what New York City is: Times Square, Union Square, Central Park, and the grand hotels. That changed when he moved here. He explained that these common images that come to mind when people hear “New York City” show “a good side of it, but it’s not really like the local side.” He realized this is not what you typically experience as a local. New York City has much more depth: “So, for me that was my [initial] impression of New York, but then coming here it kind of changed as I started discovering what it actually was about.” Ethan would typically start his day waking up at 8 am to get ready for his early classes. He would then get ready and leave at 8:30 am to take the 6 train up to Hunter College, grab a bagel, and head to his first class. He would be in class throughout the day until about 5 pm and after his last class he would hop back on the 6 train, grab some dinner from a restaurant, and head back to the dorms. He would do homework, as every hard-working college student does, sometimes go for a run along the river, and then go to bed. Living independently, and in New York City, was at first hard for Ethan, especially living so far from his family. Fortunately though, he ended up adjusting to his new environment and enjoying his new life here.

One major difference Ethan noticed moving to New York from Indiana, of course, was how crowded and loud the city is in comparison: “[Indiana is] not like the city because obviously there’s not many buildings or it’s not that crowded. [There’s] less people, so it was pretty quiet… I liked it, it was just kind of a small town though.” Indiana has a population of approximately 2,523 people per square mile whereas the location of the Hunter College dorms in Manhattan has approximately 38,977 people per square mile. Another difference between Manhattan and Indiana that Ethan pointed out during his interview was how “living here [in Manhattan] there’s always something to do or always somewhere to eat. There’s a lot more going on all the time.”

One of the challenges Ethan faced moving to such a busy, urban area from Indiana was transportation ― he shares this challenge with millions of other people (whether they were born here, moved here, or are simply visiting) moving through New York City. In Carmel, Indiana, the primary modes of transportation are by car, bicycle, or walking. A government website on transportation in Carmel in Indiana states, “Walkable communities provide many benefits including better health, cleaner air and a higher quality of life. However, there [are] circumstances in which we must travel by vehicle. While Carmel does not have public transportation, if you need assistance in getting from place to place, please consider one of the various options below.” The “options below” that the website refers to include a bus service offered by one company, a few private taxi services, rental vehicle companies, and two companies for bike rentals. Coming to New York City from Carmel, Indiana can be overwhelming when it comes to navigating the public transportation system.

Ethan says “it was hard,” and “it seemed like everyone knew what they were doing and I was the only one that was kind of just sticking out.” Ethan had a difficult time figuring out what time to leave in order to get to certain destinations at certain times: “I always ended up being late wherever I went because of the subway.” In his first few days in New York City, Ethan also got lost; from Hunter College, he took the uptown train instead of the downtown one. He narrates his story stating, “I got out and I didn’t really know where I was. I don’t know, somehow I ended up in Harlem and I was like, ‘Where am I?’ but it turned out I just took the uptown [train] instead of the downtown [one], so it just took me a little while longer to get home.”

Fortunately, he eventually got accustomed to the way public transportation works. He figured out different routes he could take to and from Hunter, learned the bus schedules, and got better at timing out his commute. He talked about how nice it is to use the buses: “when I first got my metrocard I thought it was literally just for subways, but if you know how to use the buses here, it makes your life about a thousand percent easier.”

One positive memorable experience Ethan had in Manhattan actually had to do with public transportation. One time he was going to a party at the school and was taking the M23 crosstown with one of his friends. When they got off the bus and were heading to take the 1 train uptown, Ethan’s friend realized he left his metrocard ― actually, his entire wallet ― on the bus: “he was like, ‘Hey, I forgot it,’ so we had to go all the way down to Chelsea Piers on 12th avenue and we waited there an hour, and we finally found his wallet and his metrocard in one of these random buses.” Ethan said that in retrospect the experience was fun, he got to chat with a friend, and that that was a good memory.

Living in Manhattan provided Ethan with a completely new environment than what he was used to. Manhattan is exciting and “has a cool feel to it.” Not only did he enjoy going for runs along the river and exploring New York City’s restaurants, but he also enjoyed the different events, including sporting events, around the city. He loves Central Park, and enjoys skateboarding there when the weather is warm. He loves Union Square, and he especially loves the Whole Foods in Union Square ― “It’s a nice location and it’s super convenient and it’s always really tasty.” He said there’s actually a lot of really nice places to eat around Hunter College, around the dorms, around lower Manhattan, and then ended up saying “there’s just some [nice] places all around I guess.” Ethan had a difficult time naming somewhere that he did not enjoy. After thinking long and hard about a place he could dislike, he stated, “I don’t know, I like everywhere that I’ve been so far.”  He did say that one aspect of the city he didn’t like, however, was how expensive it is. Ethan remembers his experience being a newcomer to the city very positively: “I ended up making a lot of friends, learning a lot, and growing a lot. So I definitely look at it positively.” If he could go back in time, he would make the same decision again. The experience helped him grow as a person and he had a lot of fun. For other newcomers to New York City, Ethan says they should also just have a lot of fun, be very organized and figure things out, and just get as much out of the experience as possible.

“US Demography 1790 to Present.” Social Explorer,