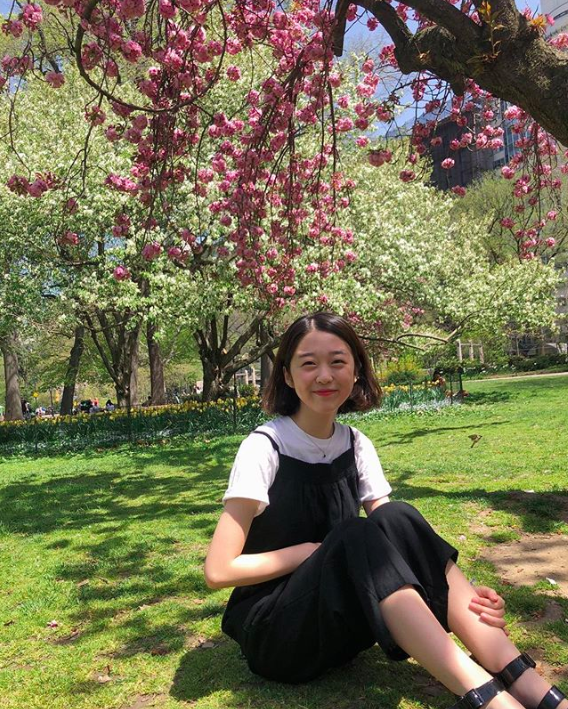 On an uptown six train sits a fair-skinned girl with a bob cut. She’s tightly packed between a man in a suit and a grumpy-looking woman with a death-grip on her purse. Coffee stains make patterns on the subway floor, but they’re soon covered with the shoes of riders who pack into the cart. There’s a strange, unpleasant odor wafting over from the other end of the train. She holds onto her Herschel backpack, getting ready to shimmy her way up from the seat. Next stop, 68th Street Hunter College. At age 13, on October 9th, 2012, Eunjoo landed in the United States with her father; her mother was 6,863 miles away, back home in Seoul, Korea. Eunjoo still remembers the fateful day she arrived in Syosset, New York. Facing a large house–a traditional old wooden clapboard–in a quiet neighborhood, she hoped this place would feel like home, and yet, how could it? Her friends were back in Korea, her mother was back in Korea, all she remembers was back in Korea…and still, Eunjoo was not a stranger to the city. In fact, she was born in Manhasset, New York and spent the first six years of her life in Flushing, Queens. “I kind of remember like a little bit about my preschool…how I went there every day to play with friends,” she said, recalling what little she could remember about her previous years in the city. Most of her earliest memories were small fragments that her parents had shared with her.

So in a way, Eunjoo was back home. She was supposed to feel like it, at least, and she tried her best to ease into this “new” life of hers. But fate had different plans in store. On October 29th, 2012, Superstorm Sandy battered the East Coast. Torrential rains were sent pouring down and the streets were turned into violent streams of water and debris. Winds reached up to 72 miles per hour, tearing down trees that subsequently smashed into power lines. Over 11,000 homes were left without electricity: Eunjoo’s new house stood dark like many others around it. She and her father scrambled to buy candles, and yet store after store, the shelves were all empty. They waited in line for two hours just to fill up the car with what little gas was available. Luckily, they were not without refuge. Her aunt and uncle lived in Syosset as well, and Eunjoo and her father stayed with them for the time being. “My cousin studied her SAT with candles on,” she recalled, “…there was no electricity for a week.” Entire schools had to be relocated to different buildings due to the loss of power. Stores and offices shut down.

And although everyone in Syosset felt the sting of Hurricane Sandy, life bounced back to normal much quicker for some than others. Eunjoo was part of the latter.

With each passing day, Eunjoo’s soon-to-be classmates excelled further and further into the curriculum, while she fell further and further behind. “I couldn’t go to school for months,” she said, remembering her initial days spent sitting at home. “I had to get a bill from ConEdison to prove something but…their office was shut down.” Eunjoo was entering South Woods Middle School as an 8th grader, a year that ended in New York State Regents exams. “Earth Science and Algebra I,” she said.

“I had to study it by myself… my uncle was giving me prealgebra homeworks and English assignments.” Days went by. Weeks. Fall jackets were stored away and thick winter coats were brought out, but still, she was stuck at home. It wasn’t until early December that Eunjoo could formally learn in an American school. Thinking that the process of transition would finally begin, she took her place at South Woods: a seat in the ESL class, marked Eunjoo. The harsh reality of her situation had yet to hit her. “I was more active. I was more outgoing,” she said, reminiscing over her past in Korea: Eunjoo, Vice President. She was a diligent, bold, and enthusiastic part of her school government and here–here in the Land of Opportunity–all of that was stripped away. In a town where 68.4% of its residents are white, she remembers being shunned by other students. She even dropped classes due to the social barriers that stood in her way. “I was afraid to talk to other students because my English is not that good,” she said. It appeared that no matter who she reached out to, her newly immigrated status led to further alienation. Even within the small Korean American community she found at South Woods, she was labeled a “FOB”–“fresh off the boat”–and the second-generation Koreans wanted nothing to do with her.

With more time, however, she befriended Japanese and Chinese ESL students who she spent the majority of her school days with. And while some second-generation Koreans began to treat her with kindness, she had already built up walls around herself: she was too shy to spend time with them. “I had no Korean friends in Syosset,” she said. This is how Eunjoo fared for her first few years in New York. She was a quiet and relatively reserved ESL student: this was her identity in Syosset. The shining vice president who proudly wore her school’s uniform was someone she no longer knew. And even with her new friends, it was incomparable to her life back in Korea. “I didn’t feel like I was belonging to here… it was a strange place for me,” she added. No matter what, it seemed that Eunjoo couldn’t be herself here, that she was a bit out of place.

While she hoped that time would cure this ailment–that she would somehow find and feel authentic comfort in this community–her entrance into Syosset High School proved its own difficulties. She recalls the multitudes of students who came to school in their expensive, shiny cars. They filled the school parking lot and it seemed that her differences grew more evident than ever. “I just came here…I just arrived. My financial status was not that good,” she said, recollecting the ways in which this first year of high school engulfed her self-esteem. In one way or another, she constantly felt that she wasn’t enough. Despite the quiet, peaceful neighborhood setting she loved, Eunjoo couldn’t find her place in Syosset; it was not her New York. However, a sudden change of events would cause her life to shift once more. Her aunt and uncle were moving to Korea, prompting a location change for Eunjoo and her father. In the next year, Eunjoo moved away from the quiet, calm, and clean suburb of Syosset into the busy, bustling, life of Flushing, Queens. Here in Flushing, the streets were lined with garbage rather than flowers. People were constantly on a straight-line path to where they needed to go, always almost butting heads with others rushing to their destinations. It seemed as if personal space was nonexistent.

To her disappointment, her new school offered no refuge from the crowds. She transferred to Francis Lewis, a school that had well over double the student count of Syosset High School. Eunjoo became part of a student body consisting of over 4,000 kids. Students would push and shove to reach class in time. Some would leave their lunch periods early to avoid the rush at the bell.

“Franny”–as students refer to it–did, however, happen to cure one ailment. While back in Syosset, 66% of the students were white, here, the count chalks up to only 15%. Instead, the majority of students were Asian American, consisting of 54% of the student population. Eunjoo found herself in a school flooded with others, as she describes it, “with the same background…with the same issues.” “It was getting better.”

Through Francis Lewis, Eunjoo was able to taste the city’s diversity. “One thing I loved was that they really emphasized their cultural differences,” she said, citing International Week, festivals, and other celebrations of cultural holidays like Chinese New Year. “I love how they respect others even though they’re from different races or religions…They embrace all differences.” Not only that, but Eunjoo was now able to take classes that genuinely interested her, classes that she felt comfortable with. “I mainly chose math and science courses,” she recalled, for she tried her best to avoid the language that made her feel so different from those around her. Still, “Franny” offered her less judgement and more freedom. It felt as if she was finally able to get a hold of the opportunity that she came here for. “Education is more open here,” she said, comparing rigid Korean standards to the inclusive American model of education. “In Korea, if you don’t get into a university in Seoul, you’re kind of a loser…you don’t go to a good school which means you won’t get a good job.” Competition in Korea was cut-throat, but in here in New York, “there are so many universities I can go to,” Eunjoo said.

Thus, after four years at Francis Lewis, Eunjoo became a full-time student at New York City’s Hunter College. Her dreams have come to fruition, for she is now studying to become a nurse: a career she has always hoped to pursue. Coupled with her big heart is the fact that her mother–who is still lives in Korea–is a clinical nurse. She hopes to follow in her mother’s footsteps, and yet this is only one factor that drew her to this profession. So on a Monday morning, you might happen to find Eunjoo sitting on an uptown six train making her way to 68th street. She might be thinking about taking a trip to Central Park–a place that reminds her of the quiet and calm that Syosset had provided–or perhaps she’s remembering her commutes back in Korea–the cleaner trains and the platforms with large, glass screen doors to keep riders from the tracks. She might be thinking of the future–the day she’ll have to give up her Korean citizenship. “They don’t allow dual citizenship in Korea,” she said, but nonetheless, Korea is still a place she considers home. “My background is Korean, but New York was a place of growth too,” she said, reminiscing how she has found a place in the city that once seemed so foreign, so strange, and so unwelcoming. “Study hard and make a lot of friends. I know it’s gonna be hard, but it’s gonna benefit you in the long run,” she advised, thinking about what she would’ve told her past self only six years ago. From the newly immigrated ESL student, to the girl who cheerily laughs among her friends in the Hunter library, Eunjoo has found a home here. She has managed to make the city her own. She wears her Docs and denim blue jeans today, but one day you’ll find a fair-skinned girl with a bob-cut in her scrubs: Eunjoo: New York nurse–lover of the city and its people.