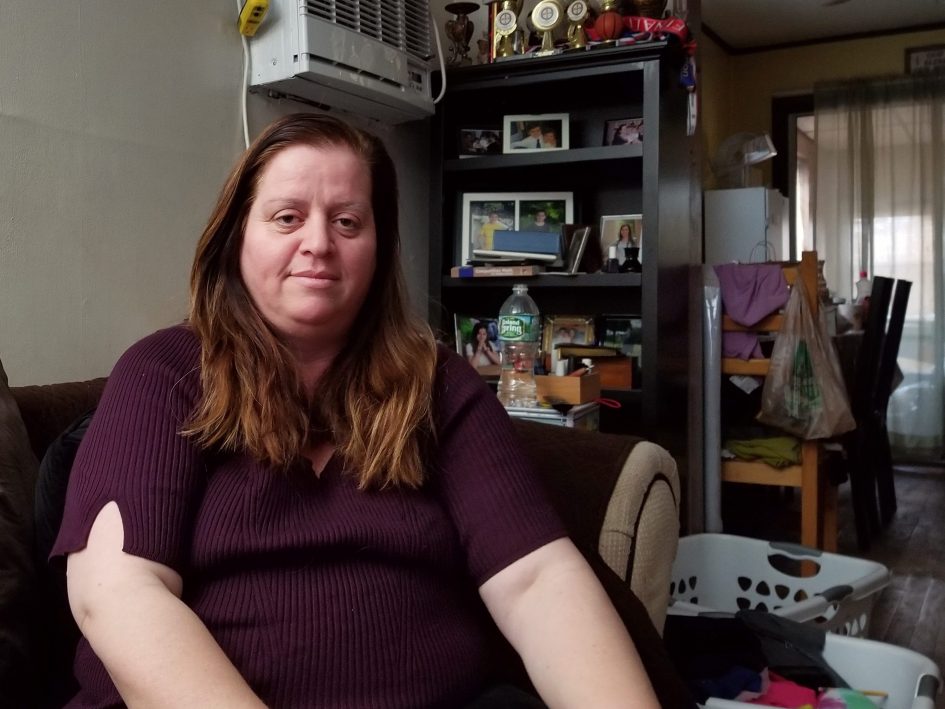 A few days into her two preteens’ spring break, Filia sits next to me. Across the street from her house is P.S. 184 Flushing Manor, the elementary school that both of her children went to. Occasionally she returns to the school to help with the Parent Teacher Association school sales and events. Her face is weary, perhaps due to their fasting prior to the Greek Orthodox Easter. For the past few days, she and her family only ate salad and French fries. She turns toward me in her ribbed dark purple shirt and begins to tell me about her impression of New York.

Filia first came to the United States at the age of five with her mother and older brother. Her mother wanted to make a “clean break” from her husband, and the three left Greece with only two suitcases and the clothes on their backs. Coming to the U.S., Filia’s mother received help from her sister who organized green cards for the three of them. They arrived at John F. Kennedy airport shortly before setting off for Cleveland, Ohio. In Ohio, there was a sense of family. Her aunt had four children and they were able to play and swim together. However, she also felt trapped: “You couldn’t go anywhere… You needed a car and I was a kid that didn’t have a car and didn’t drive.”

There, Filia was burdened by the boarding school she was enrolled in. She was placed “in first grade or kindergarten,” largely determined by her age at the time. In Cleveland, ESL programs function similarly to New York City, where the main goal is to help students obtain basic English language skills and integrate them into the school system. However, her experience points to the ineffectiveness of the school’s ESL program for Filia: “But they failed me because I didn’t know the language. All the language that I knew was Greek.” She doesn’t recall being close to her brother as “He had his space and I had my space.” Her mother, at the time, was busy searching for a job and didn’t have time to care for the two. At the time, her mother would float between cleaning houses and working in factories.

At this point, Filia begins to mention her mindset at the time. For her and her family, they dealt with the struggles of learning a new language in a new country “and as time went on, we learned, we adapted like everyone else does.” For them, the biggest change was the move to Astoria a few years later. Filia’s agenda was the same, “My job, as I tell my kids, was to go to school.” While her mother was out job hunting, and later working at a large clothing retailer, Filia and her brother were responsible for going to and from school by themselves. She would walk, take the bus, or take the train to school as needed. She couldn’t afford to be distracted and enjoy her childhood. At a young age she learned that “You can’t have the blinders on, you have to see what’s around you. You don’t have several other people, you don’t know their character, so you have to be watchful. And it was hard. It was hard for, you know, a seven-year-old, nine-year-old to do stuff.”

The lack of a parent at home also restricted Filia. Due to her mother’s strict rule of going straight back home after school, and her “loner” personality, Filia grew up with few or no friends. She tells me, with her sixth-grade daughter in the room, “I tell my kids that I lived through their childhood of having friends, playdates, parks, and all that. I didn’t have that growing up and it was sort of difficult.” It’s typical that parents attempt to live through their children in some way. For some, it involves pushing their children to a career path that the parent was unable to attain. For Filia, she sought to experience to the childhood social experiences one has in their adolescent years. She enjoyed the play dates, playing in the park, going out to movies, and birthday parties. Now, Filia herself is part of a group of parents who go back to help with the nearby elementary school’s event sales and events. They exchange messages through text and hang out together. While she lives through childhood social experiences with her children, she found her own group of friends.

At this point, Filia begins to reflect on the differences between her experience and her children. For her children, “Me and my husband are here to help them with their homework, with their schoolwork, to meeting their teachers, parent teacher conferences. My parent never did that because of the language barrier. She was not able to help me with the homework, I did it all on my own.” She calls them pampered and spoiled. Where she worked on her homework alone, despite her unfamiliarity with the language, her children have two parents able to help. Where her mother was absent due to earning money to raise her children, Filia gave up her job to raise her children at home.

From a young age, Filia needed to learn “what train to take, what stop you’re at, to focus on where you’re going instead of on, you know, the other people around you.” Now living in a near-suburban Whitestone, she shuttles her children around by car. “I tell my kids that they’re sheltered, they need to be woken up a little bit. I feel like if they get on a train by themselves, they will get lost. Because they don’t pay attention.” For the price of convenience, not waiting for the next train or bus to arrive, they have lost the mysticism of the journey gazing out through the train and bus windows to see the bridges and rising buildings.

She doesn’t blame her children for being different, or her mother for her inability to be there. “What doesn’t kill you makes you stronger as the saying goes, and we adapted. We adapted and we learned. We learned to take care of ourselves.” She appreciates the public transit system, despite its faults, for its ability to let you travel across the city. With it, she and her family were able to travel all over, without needing a car like in Cleveland. She admires the convenience of New York, where anything you could possibly need is a short trip away. She lives for the fast-paced life of Astoria and Manhattan where “it just brings energy.” Despite the chaos, Filia continues to “go with the flow.”

Growing up, her mom was constantly busy working two or three jobs at once. She tells a quick story about her mother’s issue enrolling her and her brother in school. The closest school to their apartment was Saint Demetrios in Astoria. The school offered Filia’s mother help but demanded the tuition payment in full. Newly moved and looking for a job, Filia’s mother was unable to do so. Filia’s eyes cast down as she says, “You assume that a church would say okay, you’re in a tight bind, we’ll help you out. They did the reverse to her.” Instead, her mother enrolled her children in Saint Basil’s Academy, which allowed the tuition to be paid in installments. Both schools are Greek-American, and Saint Demetrios has tuition information posted online in both Greek and English.

Despite the bad experiences with schools, Filia’s mother was later helped by a stranger who referred her to her current job. She describes the neighborhood of Astoria as “sort of tight-knit. It was close,” despite her loner nature. A couple of her favorite things about living in New York are the fast pace and proximity to everything and anything. “I used to live on Astoria [Boulevard] and Crescent Street. So, I could walk to 30th avenue which is like a 15-minute walk. And there you have stores that have fish, meat market, fruit market, not big markets. Just some small, tiny, family owned markets.” She drifts into a wistful tone as she describes Manhattan, “I would go, we would do trips. We would just walk. Walking in the city, you didn’t have to buy. You didn’t have to have the money to go buy, you could just go window shopping. My favorite place was Macy’s during Christmas. 34th Street. It was 59th street, 60th street and walk all the way down to 34th.” She took a few minutes encouraging me and her children to explore the city – to walk around, travel around, and experience it.

However, she notes how the communities around her have changed. In Astoria, “they’re not as friendly as they used to be… Buildings are going up, millennials are coming. All the folks that I grew up with have either moved away or have passed away.” She quickly makes it clear that she doesn’t hate the change. The area is well situated near a subway station and likely to change either way. Instead, she hopes that the community can gradually improve for the better, “Crime has gone up, has gone down, it’s the same – doesn’t change. But that all fixes itself, it can, it doesn’t happen overnight. It takes time. So it’s helping the homeless, whether its stopping time, whether garbage pickups [come around].” She also takes a few moments to talk about the ethnic distribution in Astoria where she questions “why aren’t they allowed to go past that particular area [of Steinway Street and 28th Street]?”

Yet, despite all of the improvements she wishes could happen, Filia still finishes by saying, “My New York is My New York.” Growing up as a child in a single-parent household, she was able to travel through the city by taking mass transit. Despite her early rise to adulthood, and by adopting perseverance as an essential life skill, Filia has found her own niche in the city. Her advice to newcomers is the same as what she was forced to do: observing the city, taking English classes, keeping up with current events, saving money, and listening to those around. In New York where “you can find anyone and everyone here,” she found herself and her own values despite the tough journey.