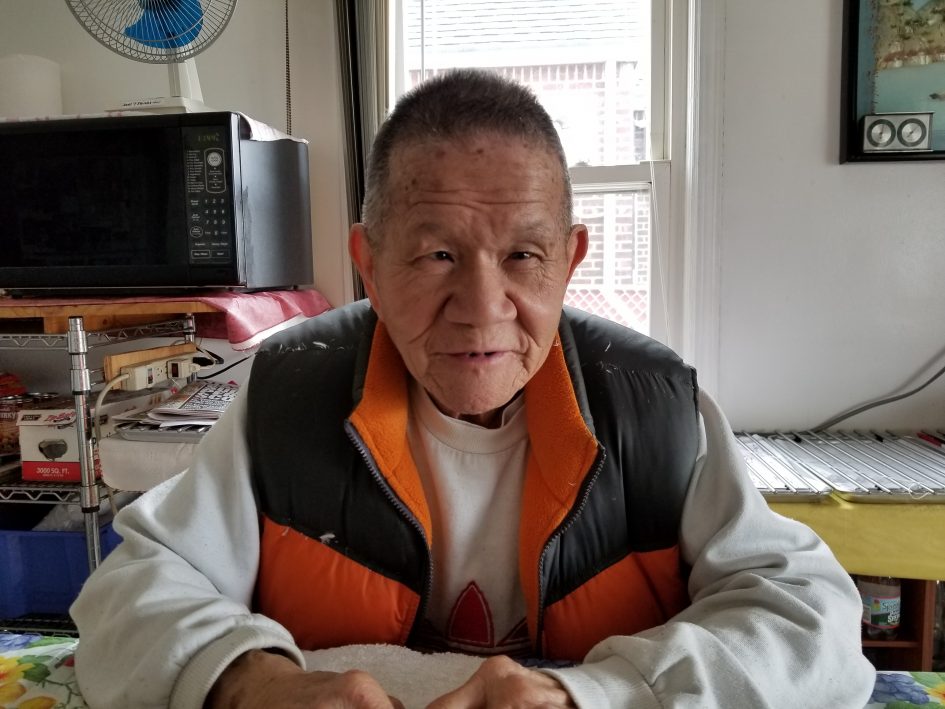 The day after his eighty-seventh birthday, Fuen Yen is opposite me. His arms are folded over a brightly printed vinyl tablecloth. As the rice cooker lets out the last of its steam, he gets up to scoop two bowls of black beans over rice. His vest is bright orange. All around the room are colors – the pinks and blues from the tablecloth, his orange vest, bright reds and yellows draped over the cabinets, and his trademark green baseball cap and yellow raincoat. He brings me to his large white fridge where large stacks of mangoes, strawberries, bananas, yellow squash, and chicken sandwiches lie. After bringing an assortment of food to the table, he sits down ready to talk.

Fuen Yen was born in the Guangdong province of China in 1932. In 1949, at the age of sixteen, his father decided to move the family to Cuba in light of the Communist Revolution. Upon arriving, Fuen Yen quickly faced the struggle between money and morality. He worked for his cousin for six months and “for six months, he never gave me a penny. He cheat me, he never gave one penny for me, not even for haircut.” At the time another one of his cousins, whose family was better off, would split popsicles with him. He jokingly told me with a slight smile on his face that his cousin would take the stick side of the popsicle while he was left with the sticky ice in his hands. Fuen Yen encountered people who tried to exploit him and people who helped him.

Fuen Yen would later open a grocery store in 1951 with another one of his cousins and his future brother-in-law. Two years later, the business partners separated to each buy their own businesses but remained in good faith. At this point, Fuen Yen was introduced to his business partner’s sister. Her family was another Chinese group in Cuba, like the many who came due to the revolution or migrated in the late 1800s to work on sugar plantations. They got married on November 21st, 1954 and had their first daughter, Augustina, in August the following year.

Over the next few years, the two had two more daughters – Dalia and Margarita. They were happy and prosperous. For Fuen Yen, “all my business in Cuba very good because I ride motorcycle, I making money, and owning business – grocery store, owning business.” He no longer worried about needing to borrow money to get a haircut from his father because he could afford it with the money from his business.

At this time, Fidel Castro was working on opposing and overthrowing right-wing Batista from the position of prime minister. In January, he succeeded and Castro’s communist regime began. Castro’s government worked on centralizing the economy of Cuba by expropriating, or forcibly seizing private businesses like grocery stores, under the government’s control. To Fuen Yen and many others, who owned their own businesses, this was disastrous. “So, I stay in Cuba until November 21. I give up all business and come to the United States.” On November 21st, 1961 Fuen Yen arrives in Miami, a few hundred miles from his former home. Fuen Yen’s first impressions of New York didn’t involve taking in the sights of the city. He instead focused on securing a job and a place to live for his wife and children. Fuen Yen moved to 205 Grand Street and worked at a restaurant at Fifth Avenue and 59th street. Starting at 10 o’clock in the morning, he would go to a school in Chinatown to learn English. Four hours later, he would start working the barbeques at the restaurant. He would work until ten o’clock in the evening, and then return home. A year later, in 1963, his first son John was born.

Shortly after, Fuen Yen opened his own restaurant at 160th Street and Broadway with four partners. While most of his partners contributed to the business, he describes one as “everyday he go to welfare. He didn’t go to work.” He would later break up the restaurant and start another restaurant a year later at 145th Street and Broadway with a former partner. They faced financial issues when opening the restaurant. The two needed eighteen thousand dollars to open, but his partner only had five thousand dollars. Fuen Yen needed to put more money into the business but lacked the funds so he  borrowed the money. “But, where did that – where did that money come from? That money come from – I have a friend in Cuba. They still live in Cuba and they send money to the United States. I keep, I keep that money for them. When they come to the United States, I give it back for them.”

Fuen Yen described his business partner at the time as “a good partner. So, he tell me, ‘every single penny maked the business, I keep until paid off.’” A few years later, his second son Jimmy was born, and Fuen Yen bought an apartment building in Elmhurst. At this time, his business partner grew sick and wasn’t able to work. Fuen Yen shouldered much of the responsibilities for upkeep of the restaurant, and he began worrying about what would happen if he couldn’t work. While his family occupied one floor of the three-family building, he bought it thinking “today I okay, but tomorrow I get sick, maybe I have no job. So three family, I can rent two family out.” The money his tenants paid him as rent would go towards the building’s mortgage.

A couple of years later the restaurant received a notice that Fuen Yen described as a “five-time sticker holdup” and the two partners decided to sell the business. He began to drive a yellow cab for the next sixteen years before his retirement in 1998. His car, a Medallion, was bought for $29,000 in 1972. He sold it for $240,000 in 1997 when he retired with a profit of $211,000. He bitterly tells me how he had to pay $78,000 in capital gain to the government, “Whatever money – same thing if you have a house you want to sell, you have to pay for that.”

While he was working as a taxi cab driver, Fuen Yen bought another single-family house in Bayside. He describes it as better than Elmhurst as there was more parking available and a nearby supermarket. While he initially wanted to sell the Elmhurst house, his wife told him to keep the house. Fuen Yen recounts saying, “Okay, I no need no money,” and kept the Elmhurst apartment building. To this day he continues to collect rent from the apartment and care for his tenants. When the hot water heater breaks, he fixes it within a few days. He constantly goes back to the building to maintain it and worries about what would happens to the tenants if the building was sold.

Fuen Yen tells me, “I always my own, only boss. Always I’m only boss. Another way, if I worked for people, how can I buy two house? You know why I buy two house? Because the money I make, I didn’t have the time to get out – go to the store buy something. So that’s why every money I make, I keep. But I give money to my wife, for the food, for everything. For the house she want to buy. I pay rent, I pay everything.” While his wife stayed at home to watch and raise the kids, Fuen Yen wasn’t able to spend as much time with his family. He was always out of the house working and trying to make an honest living. Fuen Yen constantly reminds those around him, “But, you be lucky and be careful. Don’t get sick, so you can make a living. Working hard, you know? No stealing from somebody, working.”

Perhaps for this reason, Fuen Yen feels slight resentment at government program like welfare. To him, he worked hard all of his life to provide for his family. For his house in Bayside he pays $10,000 in property taxes annually, and he doesn’t want to sell it. Yet, he also sees “people come from Kennedy Airport just get down. They get Medicaid, they get welfare [and food stamps]. We live here many years and we don’t get Medicaid, we get Medicare. Medicare, we have to pay for that. Almost one hundred thirty dollars a month.”

Nevertheless, Fuen Yen continues to view New York as the number one place in the world. He enjoys the high standard living and appreciates the propensity of jobs available. He loves his local community and the supermarket two blocks from his house. He feels that the transit system is “very good” despite taking a long time. To him, New York City is a place of opportunity and growth. Fuen Yen pushes for his grandchildren to remain in the city, learn how to drive, and become self-supporting. He wants his grandchild to have good lives, never get sick, work hard, save money, buy a house, and be happy with their lives.