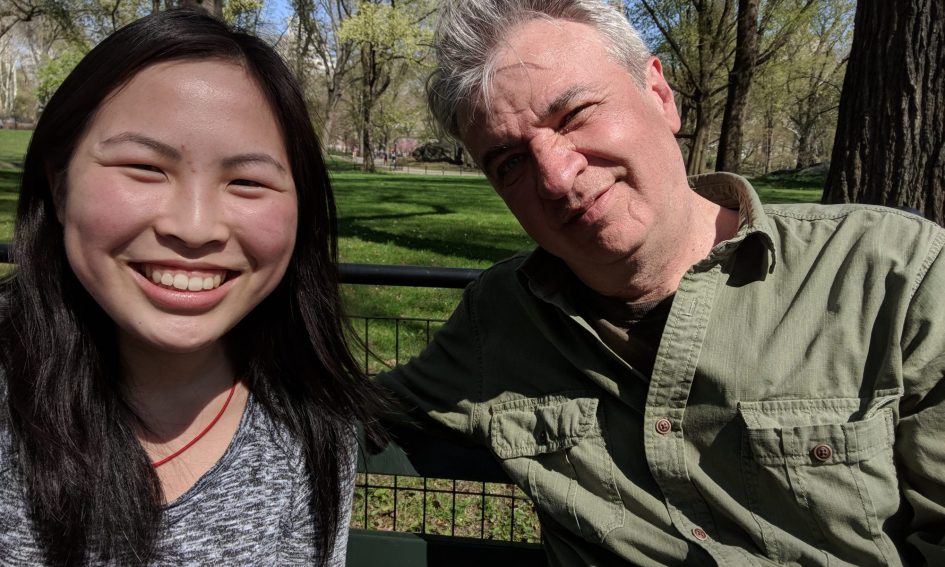 Gleb is an immigrant few would think of as an immigrant at first glance. For one, he is caucasian, blending in with the typical Anglo-Saxon American most people imagine Americans being. For another, he immigrated as a child, not an adult, following his parents from Kuopio, Finland, to Dusseldorf, Germany, and finally to New York City, as was expected of him, and with no inquiry into his preference during the whole journey.

His father was born in Great Neck, Long Island, while his mother was half-Finnish and half-Russian, giving him a somewhat unique lineage among American immigrants, and he lived in Kuopio, Finland for at least 10 years due to his father having a manufacturing job or, more specifically, a job in pulp production, a “typical job in Finland.” As Kuopio is “halfway [in the] North” of Finland, he remembers “white nights in June, [and] really short days in Winter.” Other than that and the music schooling forced upon him at the tender age of 7, he doesn’t remember much of his childhood there, perhaps to do with his more advanced age of 50-something, but I mustn’t speculate.

Once his father’s job contract ended, his family moved to Dusseldorf, Germany, where he spent three years of his life. He loved this city and believes it to be a “beautiful, old city” with beautiful architecture. He’s visited even in his adult life to his great enjoyment, and as it is a city known for its fashion and art scene, it may have been this city that inspired him to pursue what he pursues now in New York City: photography and art.

When his family moved to New York City after, they flew by plane to John F. Kennedy Airport, and he distinctly remembers not being impressed at all. There were some renovations going on, so he remembers construction workers and taking a cab on his way through Queens and Brooklyn. He remarked that “Brooklyn has changed since then,” as it’s “now more expensive,” likely alluding to gentrification, or the “process of renovation of deteriorated urban neighborhoods by means of the influx of more affluent residents” in the area, which has affected Brooklyn especially, forcing long-time residents out as property values increase and more willing consumers settle there. When he initially came to New York City, he lived in his father’s hometown of Long Island, but since 1996, he’s been living in the Upper West side in a rent-stabilized apartment that he described himself as being “married to,” claiming he would “have to get a really good job offer to leave the city,” and that it’s “hard to move anywhere else,” because he “can’t leave [his] apartment,” as the “location is good, everything is good.” Speaking of the rent stabilization law, if nothing else, this law surprised him most about New York City. He spoke of the law with a hint of pride and amazement, explaining the law to me as a law that the city created because they “want diversity and other people to be able to live in Manhattan,” and they “don’t want just financial people living in Manhattan.” He further elaborated, saying that his “landlord cannot raise [the] rent more than 1% a year,” so after holding the apartment for a long time, he’s now paying less than the market price.

To speak briefly of his initial time in New York City, as his father was born here, they relied most on him to guide them through life here, and from an immigrant standpoint, he didn’t face too many challenges. Perhaps this was due to his physical appearance that makes him seem like a “typical American,” but that didn’t stop him from having some difficulties initially with the English language. Of course, he did know some things, due to his father being American, but in school, he chose to learn German at his parents’ bidding. In addition, Finnish, being part of the Uralic family of languages, as he explained to me, made it different from other Scandinavian languages, which have more similarities to English and German, so it was more difficult for him to pick up English. He credited his love of reading with his improvement in the language. English started as a language he’d only understand the gist of when spoken and became one he’s fluent in. Still, he admitted, Finnish is his strongest language. In talking about assimilating to American life, he also mentioned his first girlfriend, who “really helped [him] feel like part of the country” and “introduced [him] to her parents,” so he “learned the way they live and their lives on a private level.”

Even with all of this, however, he “never felt really part of a community,” but he wasn’t and isn’t dissatisfied with that, as to him, American “seems like a country of individuals.” If he had to name a specific community, he’d name the art community, but even he admitted that the category is very vague and he couldn’t name people but said, “when [he] meets someone from that field, [he does] feel something in common with them.” When asked if he ever felt isolated, he expressed distaste towards the word, to begin with. He said it was “not really much of an isolated experience.” He “kinda just came here and lived his life.” He said, “in a big city, most people feel isolated [and] don’t feel connected to neighbors or colleagues, [but] if you have family, you don’t feel isolated, [and] when [he was] married, [he] didn’t feel isolated at all.” Even when saying this, it was clear he still disagreed with my term, “isolation,” and eventually, he just suggested his own: “one-ness.” He explained it using his experience of walking through the streets of Shanghai and not understanding anything and just feeling like he was “just being with [himself].” He stressed that it wasn’t a negative thing. Perhaps this accepted detachment is exactly why human interaction and an indefinable “fifth sense” sort of feeling were what jumped out most to him when asked about the unique parts of New York and differences from other places he’s been.

Regarding differences, his observations of New Yorkers throughout the years have led him to the conclusion that people in Europe are more direct, whereas here, American culture doesn’t allow us to tell so many things directly. He gave an example of the French culture of commenting on people’s outfits, physical appearances, etc. and how we believe French people to be rude because we don’t typically joke about such things, but in truth, it’s just normal. He also commented about how the rest of America believes New Yorkers to be rude because we’re constantly rushing about and pushing people, but even then, he says we’re not very direct. Regarding the best and worst parts of New York City, he cited the indefinable sense of freedom one can feel in the city as the best part, and the changes in society and human psychology to become more materialistic as the worst part. He spoke about the changes in art specifically, where he commented that at a recent art expo he was at, he had “never seen so many pink and lavender colors and sparkles,” and that “every second wall was filled with that kind of painting, pinkish or bright colors, or something sparkly.” He also said that he’d “never seen so many Marilyn Monroe’s.” All of these things confused him, and he expressed a sense of disbelief that millennials kept buying things similar or related to those themes: pink/purple, sparkles, and Marilyn Monroe.

Even with all of these changes, he still loves the city. He considers his New York a “lovable place.” He said some people think “it’s too dirty, too crowded, too this and that,” and to them, he pointed out the city’s energy and diversity before saying, “if you don’t feel this energy and diversity of the city, [you] should consider going to another place.” He lamented that “a lot of people end up finding the city too tough to live in.” They “try, [thinking] New York is the capital of the world, [so they] have to go there, have to try it,” but after “a few years, [they] just give up.” He feels grateful, for lack of a better word, that he still loves the city the way he does. If we are to speak of his love of the city, we must also mention his favorite place in the city, which is Central Park, where I had the pleasure of meeting him. He is there a couple times a week on the “straight path,” for lack of a better descriptor, taking Polaroid pictures of tourists or whoever else wants to specially capture a moment. He was initially surprised that New York City “has such a huge park in the middle” as it is so busy, and he said he had “never seen anything like it in Europe or other big cities.” He describes it as a “place [where] you can always escape from the hell of midtown.” His love for the park has given way to a documentary he created with his friend, Brian Fass, about Central Park musicians and how walking through the park can heal depression, and soon, a second documentary will be released about film photography, something he is clearly passionate about. He went off on multiple tangents about how older analog photos and old-fashioned polaroids can often be better than modern polaroid cameras and sometimes even digital cameras. He briefly described the project to me and spoke about one specific interview for this documentary that he finds hard to forget, where a 12-year-old girl wanted to take a picture, but her parents didn’t want her to. They tried dragging her away, but “the girl was a character,” so her parents let up, and seeing this, Gleb and his friend asked her parents for permission to interview her, to which they said yes. They asked her neutral questions at first, but then asked her why she wanted to take the picture so badly. Her answer was very surprising to him. She said, “I want to have one honest picture of me.” She explained that her father took hundreds of pictures of her every day, but always manipulated/edited them on his phone, so she just wanted to have one honest picture. He found her description of the picture, “honest,” interesting, and agreed with the description, as the pictures “really are raw; [you] cannot edit it; [it’s] just your picture; [you] don’t always look perfect, and [that] makes them even more perfect in some ways.”

That idea of imperfection being perfect and that ambiguity between the two perhaps has also bled into his advice for coming immigrants to the United States. For them, he has these words of wisdom: “Don’t consider yourself as an immigrant; it’s a country of immigrants after all. I know so many people and most of them are third or fourth generation or their grandparents came here, so they’re not that far from being an immigrant. Just two generations away. Don’t feel like you’re an immigrant or not accepted, especially in a big city. You’ll find your niche. It’ll be fine.” He points out something we often forget, which is that the line between immigrant and citizen is so fine, as the line between imperfection and perfection can similarly be, and we mustn’t forget that. That being said, once again, good luck.