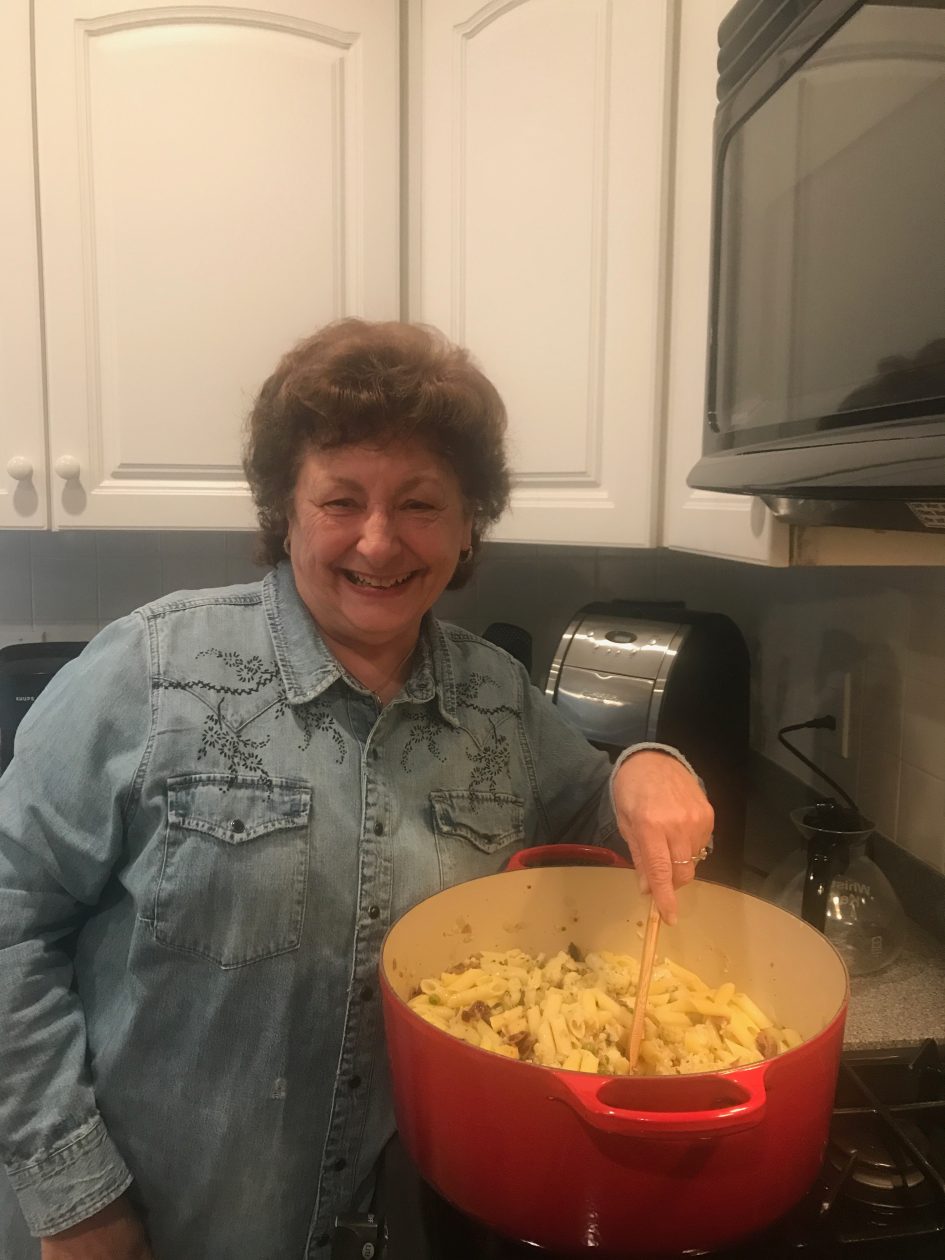 Gloria Fava will often be found in her garden, her happy place. Her small backyard in Dutchess County, New York, is cramped with every kind of plant imaginable; an impressive feat considering how many deer roam her lawn. Her neatly kept patches of flowers form rainbows; potent reds, deep blues, pinks, purples, yellows. She grows tomatoes, figs, zucchini, and so many more vegetables that she probably could supply a supermarket. In the far right of her property is her basil, plentiful almost impossibly lush Italian basil. Out of all the exquisite species of crops she tends to, the basil holds a special place in her heart. Growing basil is a tradition she carries on from her mother, who brought it all the way from a little village outside Palermo, Sicily. Gloria Fava, a woman who’s name and captivating stories I have heard over many family dinners, but never had the pleasure of meeting until now. As a doctor, my father meets a variety of different people, not only from different parts of New York, but of the world. Gloria has been a patient of my father’s for over twenty years. Over this span of time Gloria told my father of her incredible adventures she had in New York City and chronicled her migratory journey from Sicily to Harlem; today she tells me.

I sit before Gloria in her treasured garden; she has quite an elaborate patio set up, designed perfectly to host her dinner parties that she throws almost every week. She is an old woman, almost 87, but she looks incredibly young for her age. Her face still holds the expression of childlike wonder and appreciation for an exciting world. I ask her to tell me her story, her journey.

“I came to the states in 1934, I was only 3 at the time so I don’t remember much really.  One day my mother told me to put my toys in a box, and then next we boarded a ship and never returned”

“How abrupt! What a dramatic transition that happened so quickly!”

“Yes, I was very confused, but not sad. I was too distracted with my new surroundings to feel any sense of nostalgia”.

“Why did your family decide to move to the states?”

“Tensions in not only Italy, but Europe as well, seemed to be rising exponentially every day. My family was not poor, but we were far from well off. My parents wanted a new life, a life where there would be a possibility to climb up the socioeconomic ladder, a life free from dictators, a life where they would not fear the world that their children grew up in.”

Italian immigration to the States began to increase during the 1880’s. From the 1880’s to around the 1920’s large numbers of Italian immigrants gushed into the US. During this time period over four million Italians immigrated to the States, representing over 10% of the national foreigner population. The primary motives for immigration included unemployment, a high mortality rate , and appalling medical care in Italy. During this time period Italy was predominantly a society centered around agriculture, the majority of people lived and made a living off the land. Except harvests never seemed to be fruitful and as a result poverty and hunger were facts of life that many Italians had to deal with on a daily basis. Farmers were tied to their barren land, it was nearly impossible to receive an education and make a better life for yourself or your family. Italian immigration to the states began to slow to a trickle in 1924 with the Immigration Act of 1924, which caused immigration from Italy to fall by 90%! Gloria and her family were able to get around this demeaning act which blocked Italians, Southern, and Eastern Europeans from coming to the US because they were viewed as an inferior people.

Gloria speaks in perfect English, there is no Italian accent to be heard. After moving to Harlem in ’34, she quickly settled into New York life. Life was hard for her family of five at first, but she was too young and naive to truly understand the hardships they endured. Both her parents worked almost the whole day, around 12 hours. Her father spent grueling hours as a mechanic and her mother ceaselessly sewed and mended in a garment factory. Though their jobs were far from ideal, the two were blessed to be employed.

Though Italian Americans make up a total of 14% of New York’s population today, a whomping 2,700,000, they once received an outrageous amount of discrimination, especially job discrimination. Italian immigrants were used as the scapegoats for all of America’s problems. Common stereotypes painted Italians as violent, irresponsible, anti-capitalist, and uneducated. These labels forced Italian Americans into a negative spotlight that hindered there socioeconomic development. Additionally, as being predominantly Roman Catholic living in a society swept with an ardent anti-catholic sentiment, it was even more difficult to avoid job discrimination. The majority of Italian immigrants immigrated to the States in search of better employment options, so the system they found in place when they arrived was extremely frustrating. Those who were lucky enough to find employment, such as Gloria’s parents, typically worked in blue color jobs or as skilled laborers, capitalizing on their traditional Italian skills.

With both her parents working grueling hours, and her 2 brothers busy in school, Gloria was left all to herself for almost 9 hours every day. “I spent this time getting into trouble”, she tells me with a playful smirk. Despite her parents constant efforts, she would escape her painfully small, crowded apartment as soon as they would leave for the day. Taking a chair from the table, she would hoist herself up and rummage through the cluttered cupboard, searching for the skeleton key that her mother could never successfully hide. After letting herself out, the sky was the limit.

As a young, fearless rascal, Gloria enjoyed an abundance of different past times; ranging from stealing cakes from the local bakery, or even swimming in the East River! “Our apartment building was not far from the river. I loved being by the water so I would always sit on rock, and let my feet get wet. I used to bring bread and a book and sit on that rock all day. As I grew older, I grew more adventurous, and began to swim in the river.” Gloria starts to laugh before she resumes her story. “I would try to sneak home before my mother got back from work, to put on dry clothes. But a few times she caught me dripping running frantically up the stairs, and once she even caught me swimming!”. Gloria spent much of her time playing with her neighbors. Spanish Harlem at the time was predominantly Italian. Italian immigrants tended to settle in neighborhoods that were chiefly inhabited by people from the same villages as them back in Italy. Gloria and her family were readily accepted into their new community by fellow Italians from Palermo. Gloria credits the “common heritage” as part of the reason her family was able to acclimate to their new environment as well as they did. Being surrounded by people who faced the same struggles, and knew what a challenge life in America was like, formed a vital support group to Gloria’s family.  However the communities outside their neighborhood were not as welcoming. Gloria recalls that while walking to the grocery store with her mother they were called, “Dagos” and “Wops”. Gloria described how she could not be bothered by what others thought of her, but she saw the effect it had on her mother. “My mother grew very depressed during the first few weeks in America, and I think it was because of the racist hostility we received from our other fellow New Yorkers.”

Even though Gloria lived in an Italian community, learning english soon became an all consuming priority. Even while home, her mother would force the family to speak English. Despite her fathers resistance and constant stream of complaints, speaking English at home helped Gloria to become fluent fast. Speaking English become especially important, and perhaps even vital, as World War II reached the states. “During the War, my mother worked tirelessly to transform my family into the perfect, stereotypical American family. She wanted to sever all ties with Italy, she worked to conceal the fact that our family was Italian. During the war, Anti-Italianism seemed to get much worse, as the US was fighting against our country.”.

“How did you feel about abandoning your heritage?”

“ I did not think much of it, it was simply what needed to be done. It was not hard to do because I felt more American than Italian. I barely remembered Italy, I never had time to cement my roots in my home land because I left so young. I grew up in America, I was American. Identified with being Italian as only a memory of sorts, if that makes sense.”

“And how about now, do you still feel as though you identify as solely American, do you interact with your Italian heritage at all?”

“A bit of both really, why does it have to be all or nothing? I am American, I grew up here, I live here, my life is here and so are all my memories. But I am also an Italian. I remember none of my native language, and have little to know ties with the small village outside Palermo that my family had called home for generations. But I am still Italian, it is where my story began, the land of origin of the Favas!”

“And you don’t feel torn between the two?”

“Not at all! Especially not in New York. Everybody is everything here, even this upstate where we are practically in Canada (recall that Gloria lives only 2 hours from the city, in Dutchess County). All my friends here are American, but Americans that have come from all around the world. That is the beauty of New York; it is a second home open to all.”