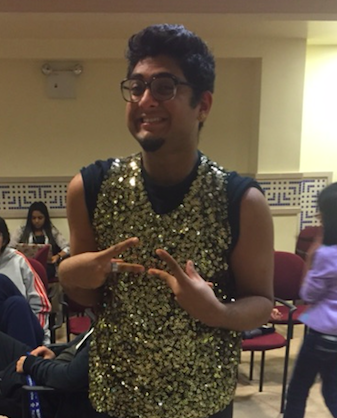 Karim situates himself in a quiet, air conditioned corner of the Hunter College library where he is currently a freshman. Finally, after years of unpredictable adjustments, he has a stable environment where he can focus on his studies. He begins to tell me his story as he looks over his notes for his upcoming quiz.

Though he was born in the United States in Dallas, Texas, Karim described the experience coming back to live in New York as a “fresh sight” and a “real culture shock”. He says with a smile, “I’ve never seen a country that’s so developed compared to the countries I’ve been to.” When he was 3, he moved from Texas to Mumbai, Maharashtra, India. From Mumbai he moved to Dubai, then to Kampala, Uganda. His frequent moves were based on his parents’ career paths. “I think the most stable my mom has been is with selling jewelry. She gets her goods from China and she sells them in Uganda. It’s a big business there because people can’t really afford gold.”

He moved back to the United States with his sister, a college student at the time. She is the reason Karim is here today. “My sister wanted to further her education, but she wanted to do it outside of Uganda or India because she wanted a better life and a better quality of education.” She brought Karim with her because he was already an US citizen. “We were the only ones who came here, our parents are still back in Uganda.” This fact led to a long and arduous process of procuring documents and filling out paperwork. The move itself was a daunting decision; six months prior they had attempted to move to Atlanta, Georgia for the same reasons and could not stay because they could not procure a stable lifestyle. “It was hard for my sister to get a stable place because she wasn’t born here.” But in 2013, they were finally able to make the move to Rego Park, Queens. At the time they moved here, his sister was 22 and an incoming junior at the Devry College of New York, while Karim was 13 and an incoming freshman at Forest Hills High School.

Out of all the challenges Karim faced while adjusting to a new education setting, it seemed ridiculous that one of the hardest parts of the process was actually getting himself into the public school system. “I feel like getting into a school was one of the hardest things I had to do.” From filling out excessive amounts of paperwork to prove that his sister was his temporary guardian to standing in lines for hours at the Department of Education just to get one fingerprint imprint. From spending a whole day at a medical center to get all his shots at once to spending a whole day testing in school because he was an international student. The whole process took 4 days. The process would have taken longer if he was given a choice to apply to different high schools. His high school at Forest Hills, a 16 minute walk away from his current location, was already decided for him because he applied late. This procedure was especially taxing on his sister, who had to accompany him as his guardian. Bureaucratic processes such as this take up a lot of time and energy his sister needs towards her own college education.

Karim was attending a boarding school in India called The RiverDale International Residential School in Pune, Maharashtra, India right before he moved to Queens, New York. The school teaches and houses elementary to high school level students. The private institution, with its small class size, encourages personalization with each student’s educational experience, which sharply contrasts with American public school education. The school also guides the student’s developing moral values and aids them in balancing their academic life. Classes take routine tests to prepare students for the Secondary School Certificate (SSC) or Higher Secondary Certificate (HSC) board examinations, which are national standardized exams in India. This is much like expensive prep schools in America that students utilize in preparation for similar exams, such as the SAT.

There is a sense of irony as Karim describes the difficulties he faced during his high school career in America. Karim came to the United States so he can be in a better education environment. Yet, over the course of his first few weeks as a freshman at Forest Hills, he realizes that he was at a disadvantage from the moment he stepped into the school. His boarding school in India didn’t have the same standards as American schools do. I asked him what it was like in boarding school and he replied, “We all sat in one classroom and the teachers would switch. It doesn’t matter if you were smart or dumb.”

In America, it did matter if a student was “smart” or “dumb”. Students are placed in classes based on an academic ladder. These factors are crucial in the college application process and directly determine their quality of college education. Karim wasn’t informed of America’s academic hierarchy, and its significance toward his future education. “That’s not something you just know when you come into the country fresh.” The grading system is also stricter in India, therefore Karim came to the United States with a GPA that didn’t correspond to the American grading system. “In India, what I had was not considered a low GPA, but here it was. I had a 78, there that was a “B”. A “D” was a 45, but here the passing grade is a 65. It’s hard to get points there because they’re really nitty gritty about their point system.” Due to a misunderstanding stemming from this grading discrepancy, Karim was placed in “regular” classes, and had to work his way up to the academic classes where he actually belonged.

American public education curriculum does not include resources that would aid students in their future academic careers. Information is often inaccessible to those who don’t have the time to look, such as low income and immigrant families. Students must go out of their way or pay out of pocket to be well informed. It’s expensive to do well in school, and many families cannot afford private tutors to help their children throughout their high school career. Karim faced academic drawbacks when placed in an American school because he was never provided the resources to know about the SAT or ACT, the difference between AP and Honors classes, and their significance in the college application process.

What got Karim through these frustrating times were his new friends. At first, he had to make social adjustments and get figure out how to navigate a more social culture. “I definitely had to make personality changes. I had to be more outward, I had to talk to more people because it was really important to have a group of friends.” Though once he did adjust, he found that the social scene is very friendly and accepting. He found nice friends and a social circle that positively affected his academic career and supported him through high school. “[Friends] will really help you with the social and educational aspects of your life. The kind of group you hung out with really affected the type of classes you took.”

Despite disadvantages, Karim expressed gratitude and joy at the position he is now at Hunter College. The city’s diversity allowed him to truly accept himself and express his passions. He was not used to witnessing diversity in a community. “In India, you only see brown people working together, or when in Uganda, you only see brown communities together and then the African communities together, you never see a big combination of one another.” Observing ethnic and sexual diversity significantly impacted his view on society and helped him accept himself. “Since I was young I was curious about being gay, and seeing it in real life makes a difference. That really helped me accept myself.”

Although, sometimes Karim misses the slower pace of life back home. “[In Uganda], I can just lounge all day at a restaurant and get a meal, but I don’t have to eat it all at once. I can wait 4 hours to finish my meal and have a conversation. [There], I can have that sort of luxury time.” But he loves the active life he lives in New York. He’s pursuing his passions as a music education major who works with high school music students in the Bronx. He says with a wide grin, “I feel like I can thrive in a community where everyone is trying to get something done, it motivates me.”

Hunter is part of the City University of New York (CUNY), with a population of almost 23,000 students, a majority of which are commuting students from the five boroughs. Many of these students also experienced disadvantages due to the complications of the American school system. Many immigrant students and families, like Karim, lack the resources to go through the effort to prepare for exams, which affects their college admission and future opportunities.

Despite these difficulties, Karim makes the best of his unique situation. He loves that he’s part of a large student body at Hunter. “I feel like the school community is really friendly and people just want to talk to you in general. It’s really hard to be offset in such a community.” Now living at the dormitories on 79th Street, Karim is one of the countless students who actively contribute to the ever evolving city and make New York City the diverse place it is today.