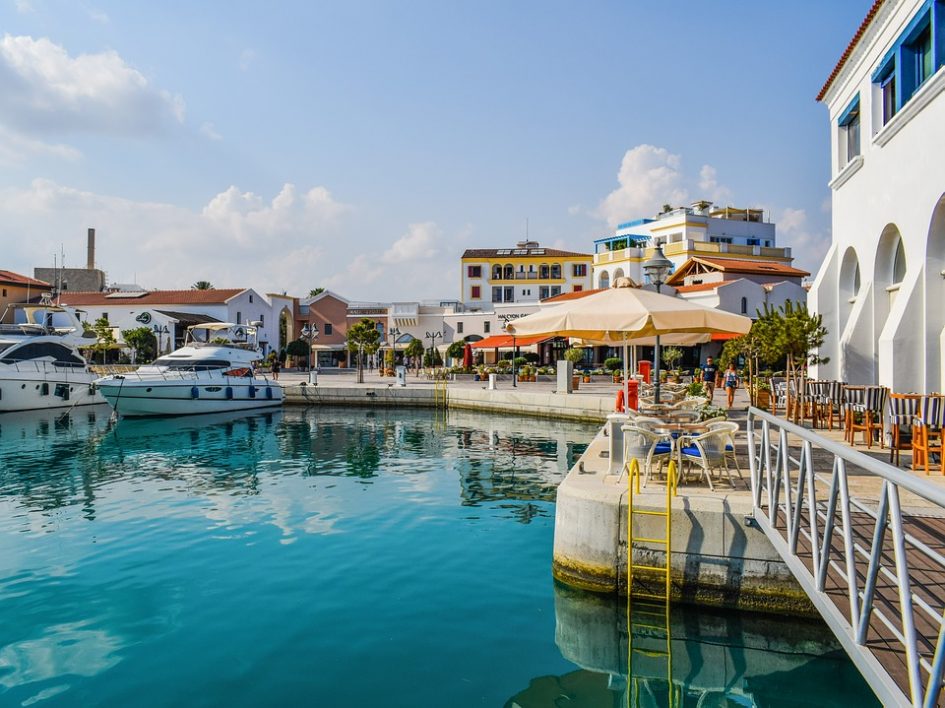 Warmth. Growing up on the southeastern Mediterranean island of Cyprus, Irene was perpetually surrounded by warmth. This feeling of warmth radiated from her loving family, whom her grandfather had led back to Limassol, Cyprus from Astoria, Queens when she was about two years old, and from the divine sea that birthed the goddess Aphrodite, which was about five minutes away from her house. Cold. Freezing winds and snow to be exact. Standing on the NYC MTA platform during a blizzard, this island girl could no longer deal with the cold. She was done with the slush, done with the subway, which she often took in the wrong direction, and done with the intimidating, anxiety-provoking, crowded city. So, like any frustrated 18-year-old, she called her dad to pick her up from the stop; no way was she walking home in this weather. This was one of the many experiences Irene had with feeling overwhelmed by subway-induced geographic confusion and the high intensity atmosphere of New York City. She laughs about them in retrospect, but they certainly were struggles to survive. In the lingo of her current career, an English professor, one of Hunter College’s own, she says she lacked “agency,” choice, in her return to New York; her older sister had decided to come here for college, accompanied by her father, so after completing high school in Cyprus and receiving the green light from her father that everything was ready, she and her mother joined the other two in the states.

Resettling in her birthplace of Astoria in 2002, Irene was provided an easier adjustment to life in America. There, she experienced first-hand the American cartoons of Disney and the nostalgic taste of McDonald’s that her father introduced her to during her childhood in Cyprus. Despite going to a multilingual international school in the maritime city of Limassol, life in this urban abode was of a different “texture.” The food was different; the buildings were different. People walked a different way, spoke a different way. There was a disregard of formalities and unapologetic authenticity to city folk that manifested in ways as trivial as “wearing pajamas out,” which was unheard of in Cyprus. “What was surprising was that people were just more comfortable being who they chose to be in America.” Their paths weren’t “pre-determined” or “culturally-enforced,” which wasn’t “off-putting,” just “different.”

Luckily, Astoria wasn’t too different. The blossoming Greektown established in the 1960s after the passage of the Immigration and Neutrality Act boasted a lifestyle roughly equivalent to that of her past. At the crossroads of Ditmars and Steinway, she lived amongst Greeks from the mainland and fellow Greek Cypriots, who still make up over 10% of Astoria’s population of about 166,000. She attended Greek Orthodox holidays at the church of St. Irene Chrysovalantou, and later the church of St. Markella. This Greek community, her first friend Angela, and a Greek professor whom she met during her undergraduate years at John Jay College of Criminal Justice facilitated her transition back to New York.

She describes the neighborhood as “quaint” and “cute,” compact with the sights, sounds, and smells of Greek businesses, restaurants, and bakeries. This was all very warm and familiar, with the exception of the numerous delis she was fascinated by in the beginning. The concepts of widespread access to sandwiches, notably bagels with egg, ham, and cheese that Cyprus did not have, and 24-hour service were humorously groundbreaking to her.

Today, as she approaches the time of her life that will divide her years equally between Cyprus and New York, Irene realizes the comfortable warmth of the ocean could double as the stifling heat of the desert. There exists a sense of “complacency,” a “reductive” ease to conversation and daily life that permeated Cyprus, and, by extension, the Greek hub of Astoria. People just were. There was no desire to venture past what they already knew and loved because they had all they could ever need or want in life. Cypriot food was the epitome of “organic,” directly from the farms to the markets to the dinner table. Siestas occupied three hours in the middle of the day after long nights of bliss, thriving off of the energy of lively music and companions. Financially speaking, families lived comfortably, so comfortably that Cyprus was classified by the World Bank as a high-income economy in 2001 and ranked 23rd in the world by the Economist Intelligence Unit in terms of the Quality-of-Life Index. In fact, Irene tells of a conversation she had with her husband once on the prevalence of housemaids, typically from countries in southeast Asia, in Cyprus. “You get accustomed to a lifestyle that seems ludicrous to somebody in America because we’re all just working to make ends meet.”

This comfort comes off as decadence, as the prevailing tone of Cypriots comes off as “indulgent” and “hedonistic” to Americans, who often have to shed blood, sweat, and tears to earn that same comfort Cypriots are born into. America offers the chance for the individual to explore the world outside of the cultural matrix, to grow not just professionally, but personally, creating satiating connections with others who share the same interests and goals. One such connection Irene fostered was with the previous Chair of the English Department at Hunter College during her graduate years, Cristina Alfar, who enlightened her on the genius of Shakespeare, specifically on the nature of male bonds in Early Modern society. (Comically, Greek men conveniently tend to serve as prime examples of these male bonds in action.) Irene was blown away by the way Alfar engaged the text, for Alfar set an example of the type of teacher she soon hoped to become. People in the states have the ability to self-actualize on intellectual and emotional, rather than simply physical, levels, and feel motivated by the drive to constantly improve and keep up with the times. “I feel like the times don’t exist in Cyprus a little bit, which is idyllic, but not for an indefinite amount of time. It’s nice if you go there for a break, like a month or two, but to live life there I think would be very stagnating.”

One of the hallmarks of life in an ethnic enclave, such as Astoria, is the stark similarity of the American town to the foreign country, the almost direct transportation of the visitor to the homeland of the residents. Immigrants are not forced to change their ways, fabricating a bubble that fosters the same sense of complacency of their roots. With strong familial and communal bonds and resources at their immediate disposal, the push for development of the self-sufficiency and self-reliance equated with being American is eliminated, or at least mitigated. The younger generation risks inhibition by an upbringing that fosters dependence on the family. As for the older generation, elderly Greeks often do not even learn English because there is no urgency to; they can walk to the bakery down the block and have conversations in their native tongue. Even though Irene was living in America, she was not yet “living American;” in Astoria, she was still “living Greek/Cypriot.”

She relates that it was not until she was finally on her own, waitressing in Astoria and soon working as an adjunct professor in the city, that she began to get a feel for what it means to “live American.” Then, once she met her husband of two years, Andrew, whom her mother described as having a “Kennedy-like” panache, the aptitude of the all-American boy, he truly ignited her sense of agency, her sense of self-determination.

Irene met Andrew, who isn’t Greek or from Astoria (shocker!), when she was 25 in Long Island; the couple presently resides in the suburban town of West Babylon. Little did she know that he would expose her to the world outside the normative and cultural, compelling her to grow in ways her prior environment could not and cross boundaries that would have been uncrossable without his support. Her face lights up when she talks about him.

“When you’re with an individual who is very much independent and self-sufficient when you are the exact opposite, reliant and lacking initiative, it catapults you, violently, into figuring out, you know, how to be your own person. So I think that he was a very important ingredient in that, and he’s very American in that perspective. So, I would say that the best part of America is following him.”

While her heart is filled with warmth, from her husband and students, she still experiences the cold of the “system.” The high-paced, deindividuation of life in the big city, life in America in general, instills in its inhabitants the dog-eat-dog mindset, the mindset that can drive one “to the point of a self suicide and exhaustion.” Cyprus can be too personal, but the city isn’t personal enough. In Cyprus, everyone is in everyone’s business; in New York, one becomes just a number, with only one’s own business to care about. This is especially prevalent in the system of adjunct labor. Adjuncts lack stability and visibility in their positions; they are not guaranteed that they will return to teach year after year, as professors with tenure are. However, Irene has put aside her “beef” with the nature of academia and the educational systems in the states. While she sometimes regrets following passion and neglecting to understand the realities of the profession, she has made her position an honorable way of living by inspiring students and enriching their lives through literature with timeless appeal.

“I feel that there’s a sanctity, a reverence in the practice itself, but I feel there is no room for that in a system that squashes adjunct labor.” Still, she expresses that the way a teacher resonates with her students is “worth all the money in the world.” Learning from her students, she grows with them, becoming more perceptive, educated, actualized, “better than I am.” Having experienced the good, the bad, and the ugly in America, if Irene could go back to Cyprus, would she? Lamentably, she would, “without a second thought at this point, having seen what the system does to you.” She says she is learning how to be optimistic, to not let the cold get to her and to let the warmth instilled within her lead the way. Although Cyprus will always have the “taste of home,” she recognizes and appreciates how life in America, especially life with Andrew, has caused her to mature and evolve exponentially. She advises young immigrants to “network early, get out, and find their way.” It is important for them to be wary of the circumstances of the new system, yet not become entrapped by the hindrances of the old. That is how they can obtain and retain agency from the start.

Irene nears finding an optimal balance between the extremes of her two countries, allowing the warm front to meet the cold front and precipitate the perfect storm.