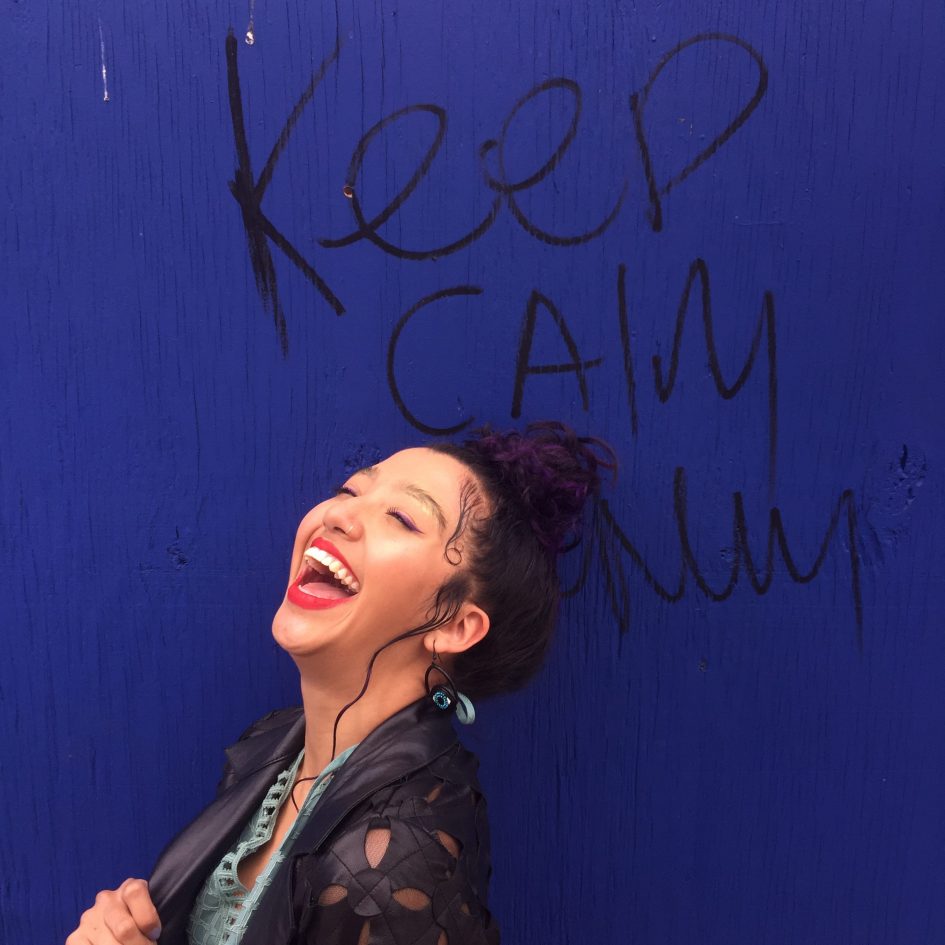 Manuela blends into her college campus; a normal student leading me to a popular coffee shop in the area. She began to tell me her story as she comfortably situated herself with her hot chocolate. She was born in Envigado, Medellín, Colombia. She doesn’t remember much about her life in Colombia since she moved away when she was 4 years old. She describes what she remembers; fond memories of how the roofs of every house were covered in wavy terra cotta. She explains that Envigado means “terra cotta town”.

“We decided to move because, well my mom has been a single mom always and she wanted a place where I would have an opportunity to do better and so would she.” They got off the plane in New York on September 9th, 2001, two days before the twin tower attack. “If our flight would have been two days after that, we would never have made it to New York.” And though they reached New York, Manuela and her family would have to climb hills and scale mountains to get to where she is today.

Securing a stable living space was difficult as undocumented immigrants. During their first few years in America, they faced homelessness for a short period. They bounced between different houses and rented out rooms in Queens, mostly in Jackson Heights. “We had to sleep on floors. I didn’t notice though, I thought that it was sleepovers or slumber parties.” Her mother always put on a brave face for her and despite working 3 jobs, always found a way to send Manuela to school with her hair and her uniform clean. Her mom worked anywhere she could; at a hair salon, a chocolate factory, as a dance teacher, etc. Regardless of the ridiculous amount of hours her mom was putting into working, they were still unable to afford a comfortable living, including a place to stay. “It’s not just about the expenses of living, it was the expenses of everything she had to pay off when she got here.” On top of paying off debts for her plane ticket and paperwork, her mom was also sending money back to her family in Colombia and paying for child care.

Her mother was a professional tango dancer back in Colombia who won the National Tango Championship in Manizales, Colombia the year she was pregnant with Manuela. “I guess she thought she would be a dancer in New York and my aunt was already here with her kids so I guess we thought she would be supportive.” Their expectations did not align with the harsh reality that met them. Relatives in New York met them with little support and isolated Manuela and her mom, their family mostly made them feel like they didn’t belong. “It was such a drastic difference from being in Colombia where I would always be with my cousins. We would always play I was always included. Then to come here to get locked in an apartment is terrifying.” Station for the 7 subway train line in Jackson Heights, Queens

After 4 long years, they moved away from her aunt’s family in Flushing and back to Jackson Heights, Queens. Manuela is 8 and she has a new little brother, but her mom was still a single mom. Her mother’s identity as an undocumented woman of color made securing work elusive. She was unable to secure a stable income, health care, and be financially independent because she was undocumented. New York State regulations do not allow undocumented immigrants to have the same benefits as US citizens. “My mom didn’t have insurance, [that would give her access to medical care without paying high prices] my mom didn’t have a lot of things [that US citizens have regular access to].”

The thought of “if circumstances were different, if our financial situation was different, if we had our green cards…” followed Manuela every step of the way. Not only did Manuela’s undocumented immigrant status affect her living conditions and family dynamic, it also affected her college application process. “I applied for scholarships and went for nice private schools [with dance programs], but at that point I was undocumented and applying for schools was really complicated because I don’t get any aid.” She had to put in more effort than the average student to have the same opportunities as them. She commuted by herself to all her dance lessons and auditions because her mom couldn’t apply for a driver’s license. Her mom, who didn’t go to college, could not guide her through any of the paperwork. There were a lot of opportunities she didn’t get because of her undocumented status. One of them was being nominated for a Posse Scholarship, which is a prestigious scholarship that gives exceptional students full tuition to elite schools. “That’s one of the things that I look back on and think that it’s really unfair. I worked so much harder than many of the students in my school that would just slack; to face that pain of not even getting a chance to get this scholarship.”

Unfortunately, Manuela didn’t get into those private schools or dance programs. She was heartbroken, but she knew she did everything she could. She decided to go to City College in Manhattan. Her financial instability followed her. She could not apply for financial aid because her green card was processing. Her family could not afford to pay for her college education, so she began to pay for it herself through working. “I’m the first person in my whole family to go to college. I didn’t want a McDonald’s job or a low minimum wage job because I deserve more than that. I worked so hard on my skills, I’m not just going to take that.” So instead, she worked as a babysitter, and the families that she babysat for lent her money for her education. In a combined effort with her moms support, close family friends and her jobs she found a way to pay it off.

Soon enough, the family’s green cards came through. “That was the first step for knowing that soon we’re going to become more independent. I remember getting [the green cards] and thinking ‘Oh my God, I’m human, I exist, I’m not unimportant anymore, I’m not this alien thing they keep calling us.’” Now with financial aid funding her education, Manuela was able to focus on her studies and passion in the arts. “I always escaped inside art as an outlet, dancing, performing.” Her mother fostered this side of Manuela as a dancer herself. Her mother would always allow her to explore her artistic side and express herself in a creative manner. “My mom didn’t want me to sit down and overanalyze what was going on, she lives by the philosophy that ‘children are truly supposed to be happy and that’s it.’”

Additionally, Manuela realized she herself was more financially independent because of the money she earned from babysitting and scholarships she could now apply for in college. She didn’t need to depend on anyone else for money anymore. “If I want to save up I can do that. If my mom needs a gallon of milk, I can go get that. My first step was supporting my own little financial needs. I start to slowly take care of myself.” She was able to begin supporting her family in any way she can. Her situation truly began to look up once she received her green card.

Her college years have been busy thus far. She’s been creating many independent projects, always going to events, and meeting new people. “I may not be financially strong, I may not be where I need my family to be, but I believe when you meet more people, you rise socially.” Her opportunities for jobs, internships, and travel all directly stem from Manuela always making new connections with people. She’s learned what it takes to get to places after coming from nothing. Manuela at her school, the City College of the University of New York

Now, Manuela is in the CUNY BA program and participates in dance, theatre, and modeling. She has a job as a Dance Teaching Artists at Harlem School of the Arts. It’s a real, career building job that she absolutely loves. It’s similar to her future goal in founding an organization that specializes in outreach abroad to help kids in low income communities create art. Additionally, her current job gives her a stable salary. “I can really help out now. I can come home and do grocery shopping; if my mom needs something I got her back. If we don’t have enough money for the rent, I have her back right away.” Her mom was able to find a job with a real income, a childcare position; something she hasn’t had ever since coming to America. “Now, if my mom wants to do something for herself she can do it.” There is hope now despite the constant juggling of all their financial responsibilities.

Manuela firmly points out that her family still suffers from the effects of being undocumented for so long. “Right now I’m still trying to figure out how to help my mom and my brother become financially stable. It’s such a huge aspect, even now as things have gotten so much better.” They’re still behind on the rent, and her mom’s financial responsibilities haven’t diminished since moving to America. Her brother is now 12 and is acting out in school; her mom cannot handle his distress on her own. Manuela takes on the role of a co-parent, a college student, and a working adult. She also balances her ambitious academic endeavors with a financial responsibility to keep her family afloat. “It’s hard for me to think that I only have 2 or 3 responsibilities, it’s never been that way, especially when you come from an immigrant background.”

“I’m an undocumented immigrant who has made it through, who is doing so much to love this country and do great things for it.” Manuela is grateful she grew up in Queens, as it’s one of the most diverse places in the world. She’s proud of growing up as a New Yorker amongst a flurry of various cultures, people, and stories about protest and empowerment. She fully understands that she would not be in school or have all these opportunities if she hadn’t come to America. She recognizes the negative that comes with the positives of living here. “There’s a lot of things here that disappoint me, but I want to stand here to make it grow. I can’t see myself investing in another community as much as the one here.”

Manuela and her mother believe that the working class and undocumented cannot let those labels define them; they cannot let those labels become their identity and stop them from being someone more. She believes in “going for it”, even if they don’t have enough money at the moment, even if the odds are stacked up against them. “My mom says that if I go in swinging, then something is going to happen, you’re going somewhere. With my three crumbs and one penny I made it.”

Bachrach, Deborah, and Karen Lipson. Health Coverage for Immigrants in New York: An Update on Policy Developments and Next Steps. The Commonwealth Fund, 2002, longtermscorecard.org/~/media/files/publications/fund-report/2002/jul/health-coverage-for-immigrants-in-new-york–an-update-on-policy-developments-and-next-steps/bachrach_healthcoverage-pdf.pdf.