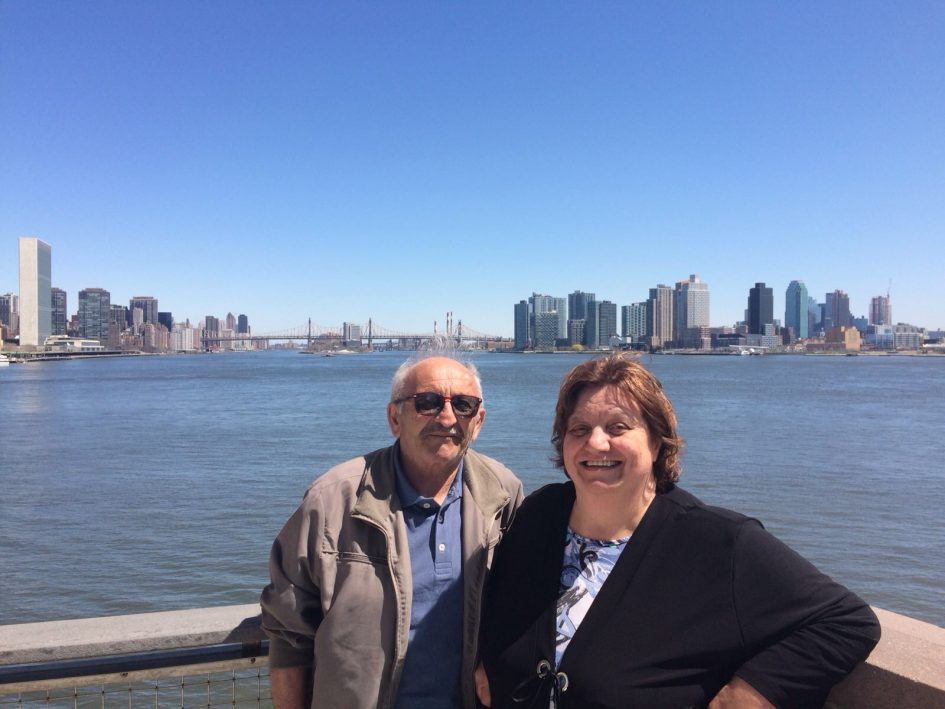 The vast array of resources and stimuli that are present in New York City result in the experience found here by an immigrant is varied down to the individual. The perfect example of this is Rosa, who, despite going through many of the same trials as her brother, Dominick, described her experience here in New York as mostly positive, which stands in contrast to her brother’s opinion on their time here.

Rosa moved to the United States in 1966 from the small town of Siano in the province of Salerno in Southern Italy when she was ten years old. Her father, who was struggling to find work in a stagnant Italian economy, was given an opportunity to move to the United States. He seized this opportunity and moved with his family to live with Rosa’s grandmother in North Brooklyn.

She made the journey across the Atlantic on a passenger ship, one which she noted to have been one of the newest in the fleet. It was on this ship that she was first exposed to things such as pools and movie theaters. In her eyes, this gave the trip an air of excitement and discovery, despite the fact that, never having travelled by means other than walking, the family was seasick for a majority of the trip. However, for Rosa, the most significant excitement came upon her arrival to New York City. She states, “I hardly had ever seen a car – my uncle came to pick us up in the station wagon and just seeing that big car was some big deal”. Coming from a far less developed town in Italy, seeing something that seems as common as a car had a much more significant impact on the ten-year-old from a small town. By this time in Italy, the automobile was not an uncommon commodity. Italian automobile production had been well established by the 1960’s, as it had been developing since the founding of the Turin-based company Fiat in 1899. However, for those who lived in the poorer, agrarian South, cars were not only unaffordable, but also unnecessary in their lifestyle.

She continued to talk about things she saw for the first time such as, “all the people in the city, all kinds of people, that was something I could never forget the feeling: looking out the car window watching all these people’s faces, all different, all the skyscrapers, all the big buildings, I’d never seen anything of the kind, you’d look up and I could almost fall back trying to see the endings of the buildings – you couldn’t see the endings of the buildings so much they were tall. That’s the first impression – that remains with me it’s something I’ll always remember.” It was at this time in New York that there were some of the tallest buildings in the world. At the time of Rosa’s arrival, the Singer Tower was still standing. The Singer Tower was once the tallest building in not only New York but the world in 1908. This was surpassed by the Chrysler Building and the Empire State Building. In addition, it was during her time here that the Twin Towers were completed, which then passed the Empire State Building as the tallest in the world. This was enough to be staggering to someone from any part of the world, so it was understandably an incredible sight for someone who had never seen a building more than a few stories. It was the type of memory to instill awe in the mind of a young immigrant girl.

After this initial wave of exposure, Rosa had to go through the period of getting settled into life in the United States. Upon arrival, she moved with her family into her grandmother’s apartment in Bushwick, Brooklyn. Since her grandmother had been living in New York for a while before the Leo family moved in with her, she had acquired many items that were used in everyday life here that were rarely, if ever, seen in Rosa’s town in Italy at the time. She stated, “…all of the things she had in that apartment were part of the things I had never seen, like a tv like running water – we didn’t have in our town – hot and cold running water, that was something really – and other appliances like a washing machine, a toaster – that amazed me, seeing a toaster and the bread popping out, that was something I’d never seen – things like that – the toys my family brought us when we got there, things that we had never seen – we knew they existed but we had never seen them.” For Rosa, seeing these pieces of technology integrated into everyday life was the next step towards immersion in American culture. The electric toaster was introduced to America in 1926, so it had been in use for a significant amount of time by the time Rosa arrived in the United States. Becoming acclimated with how to use the toaster, along with other technologies which were new to Rosa, served as a medium for her introduction to this new way of life. When asked if it was difficult learning to use so many new technologies that she had never encountered, she replied by remarking on the tendency for people to have an easier time adjusting to a life which is better than that from which they came. This is most likely due to the realization that these changes will benefit them, thus they are welcoming, and more eager to take on the challenge to adapt.

Being slightly older than her brother, Rosa had a much easier time adapting to the language and educational differences than her brother. She completed 6th grade with high grades and stated that she even came in third in a spelling bee only one year after being exposed to the language for the first time. She credits this to her passion for reading, recalling the amount of time she spent enjoying the library. This large collection of books in one place was another aspect of life that impressed her, since she enjoyed reading so much.

Although she did face some conflicts with her classmates, she believed it was nothing out of the ordinary in an elementary school when something or someone foreign was introduced. She recounted, “I remember not understanding other children. I remember them teasing me. I remember the kid sitting behind me pulling my hair and putting ink in my hair, but no big things I don’t remember – just things kids do everywhere when they’re shown something new or somebody new.” So, although she was teased and singled out as different, she did not appear to interpret that as overly traumatic.

Outside of school, Rosa was not allowed much free time. Her parents left before she had to go to school, so she had to get to school with her brother on their own. After school she stated that they would come home, finish their homework and have to take care of things around the house. “I remember I even helped my mother trying to prepare some things for dinner before she came – things that a 10-year-old or an 11-year-old could do – not big things. I remember playing with my brother while we were waiting for my parents, I remember fighting with my brother while we were waiting for my parents all by ourselves.” This shows that when she was not busy with chores given to her by her parents, she spent a lot of time with and developed a close relationship with her brother. However, she did develop more of a social life as she got older. She states she would keep herself busy by “Hanging around with other girls my age, going down the main road, looking at stores, doing shopping – looking at windows more than doing shopping – looking at windows – that’s about it, we didn’t have – at least at the time – I didn’t have the freedom to do anything else.” Although it is not much, this small amount of freedom further immersed her into the glamour and excitement of American life at the time.

The culmination of all these experiences led Rosa to describe the overall experience here in the United States as a positive one. However, the most difficult challenge Rosa would face would come eleven years after her arrival. After staying here for a period of time, Rosa’s father decided that they had stayed for a sufficient amount of time and had earned enough money so that they could return to Italy. She described the move back and re-assimilation into Italian culture as much more difficult than the assimilation into American culture. “11 years had passed in what I think were the most important years of your life: the years that form you, the years that make you grow up, make you change from a child to a teenager to an adult, so going back, even if things are changed even in Italy, not as much as they changed here too, and going back was traumatic – it took me more than a year to get assessed [assimilated] to Italy. “The change that initially took her a matter of months, took her over a year to complete in reverse. This followed her philosophy that people have an easier time adjusting to a better life. So, since she was now moving to what she believed was a worse life, it was an infinitely more difficult task to become settled. In her words, regarding if she had had the choice to stay or leave, “Thinking as I thought then I would have stayed.” She did eventually resettle and lives happily in Italy now with her husband and children. However, this shows that she truly valued life here higher than her previous life, and that she believed her experience in New York overall was a positive one, which is the opposite stance taken by her brother, who moved back to the United States and still lives here today.

Both, however, recognize the merit and reward that can come from living in New York. When asked what the best part about living in the city is, she responded, “What I liked living in NYC most, what I always liked about living in NYC is it’s like you’re in contact with the whole world, just take a ride on the subway and you meet people from all over the world so you know how people are from one place, how they are in another place, you’re not always in the same town with the same type of people with the same facial features – it’s that being part of the world.”

Myrtle Avenue under the J train in Bushwick, Brooklyn