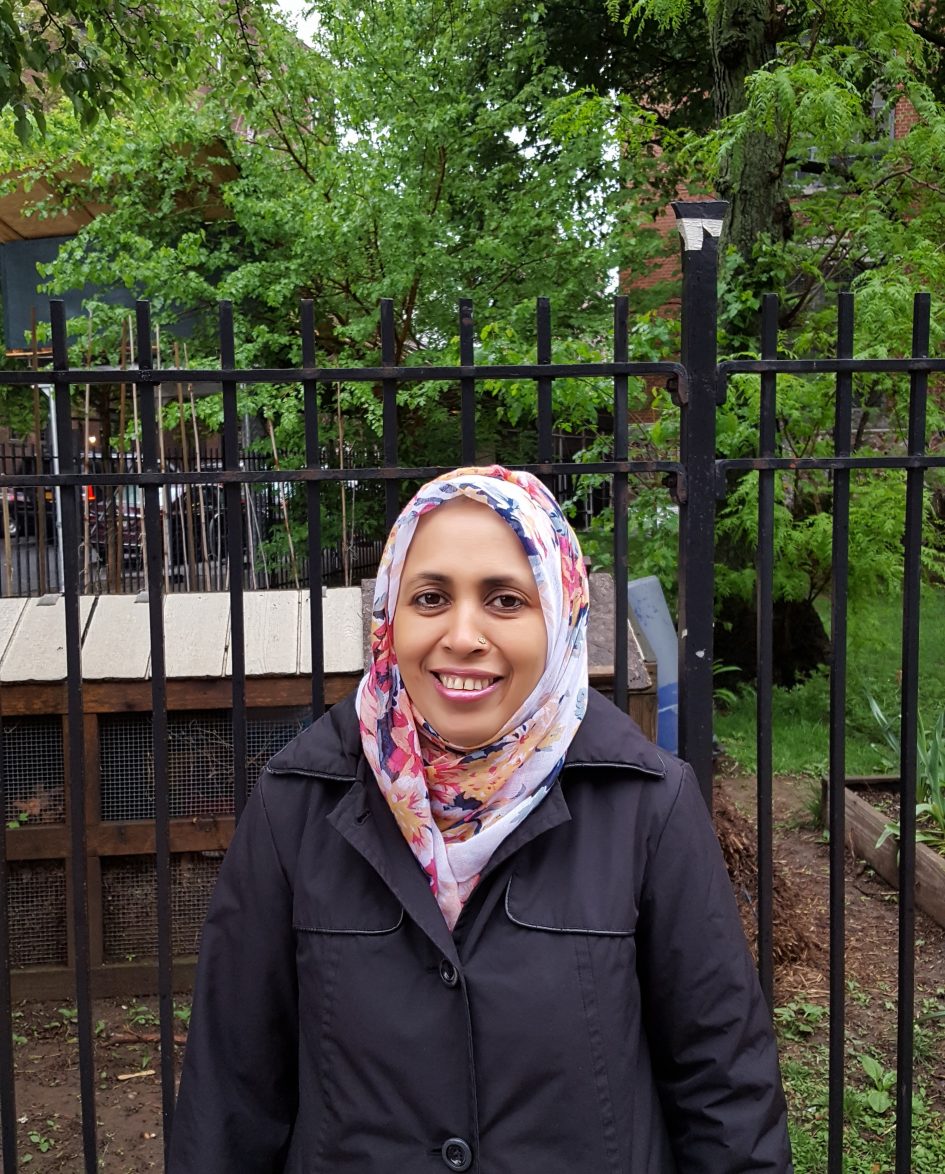 Early on a Thursday morning, Shamsun wakes up in her Brooklyn apartment. She has a busy day ahead of her, starting with getting her younger daughter ready for school. Her other daughter is already awake and studying for her period 5 math test. She goes through the week mentally before getting out of bed, reminding herself of everything she has to do today. Leaving her room, she tries not to wake up her husband, who starts work later in the day. She heads to the kitchen to get breakfast ready for herself and her family. She makes some pancakes and fries a few eggs before calling her daughters to get their food. She used to almost always make a traditional Bengali breakfast: paratha, a lightly fried flatbread, with bajhi, a dish made of fried vegetables, but it would take up to an hour, something that she usually does not have the time for. Nowadays, Shamsun usually sticks to easier-to-prepare fare. Her children also have a preference for American breakfast foods, which, although easier to make, always seemed sort of bland to her. She only takes the time to make the kind of breakfast she ate in her childhood on weekends, and even then, not every weekend.

After her younger daughter finishes breakfast and gets ready to go to school, Shamsun walks her to school. It’s not a very long walk, only about 4 blocks but along the way, her daughter excitedly tells her what she’ll be doing today. As they approach the playground of the school, Shamsun starts to see other parents, which have ended up becoming her friends. She drops off her daughter at the school entrance and makes small talk with the other parents. Her English is not perfect, even after almost twenty years in America but her confidence and sense of humor put her fellow parents at ease when they talk to her. There are also a few Bengali parents, some of whom are even more recent immigrants. She talks to them in her native language and listens to their concerns about the school and their children’s education. She volunteers as a Bengali translator at the school and is a member of the PTA and will bring up these concerns at the meeting later today. The PTA meeting starts in about 2 hours, at 11, so Shamsun rushes home. Her husband has woken up and is getting ready to leave work. They have a quick breakfast together before he leaves for the train station. He manages a restaurant in Manhattan and is able to make his own hours but has a large order coming in today and is in a bit of a rush. Shamsun isn’t on refreshment duty for the PTA meeting this week so she reads a Bengali newspaper to pass the time. A lot of the news has to do with Bengali politics, something she is no longer very invested in. After a little while, she switches to Mrs. Lincoln’s Dressmaker, a book she has been working through for the past week. It was recommended to her by a friend of hers, Ms. Hester, a Spanish teacher. After a while, she heads to the meeting. She arrives early to be able to socialize with the other parents in the PTA, some of which she considers to be her friends.

This is a marked difference from Shamsun’s first few years in the United States. She came to the US in the year 2000, after living in Bangladesh her whole life. Her life there wasn’t easy but she had enjoyed it immensely. She came from a big family, with 5 sisters and 3 brothers. She spent most of her childhood in Dhaka, the capital of Bangladesh, and its most metropolitan city. The move to the United States was a tumultuous time for Shamsun after spending her entire life in Dhaka. Hatirjheel, an area in Dhaka very close to where Shamsun grew up.

Although she was the third oldest sibling, she took on many responsibilities as a teen. Her older sister was several years older and got married early and she ”ended up being the big sister for most of [her] siblings.” Her bigger brother was not the most responsible individual: “[he] would always go off and hang out with his friends.” Shamsun’s mother suffered from health issues that, although never diagnosed, resembled depression and she ended up having to take care of the household from the time she was about 14, while her dad took care of the family’s businesses.

Despite being burdened with a heavy responsibility from a very young age, Shamsun remained in school. She never excelled, but her younger siblings did, which she took great pride in. Eventually, Shamsun began to attend college with the intention of eventually working in education or education administration. As she continued her education, she also continued to care for her younger siblings. In part due to her efforts, two of her siblings went on to study medicine and eventually became doctors.

For most of her life, Shamsun had been in charge of a household. People in her neighborhood knew her fairly well as a very responsible and hardworking person. Even though she lived in the biggest city in Bangladesh, she knew most of the people who lived near her and they knew her. This all changed when she moved to the United States. This rapid change made her first few years in the United States a difficult time for her. Shamsun graduated from college with a degree in history in the early-1990s. She started to look for jobs and manages to find a teaching job. However, as this was happening, her mother’s “condition got worse and she started having breakdowns.” With this new change, Shamsun decided to focus on taking care of her family and gave her job to a friend. Oddly enough, focusing on her family led her to meet her husband, which eventually led her to immigrate to the United States.

As a well-educated young woman from a respectable family, Shamsun received several marriage proposals. However, she “pushed that off because [she] wanted to make sure [her] younger siblings finished secondary school.” Part of doing this was taking her little sister to an admissions exam for college. There, she met her future husband’s sister, who eventually connected them. A meeting between them was arranged, a meeting that would change Shamsun’s life fundamentally.

Shamsun’s husband had been splitting his time between Bangladesh, Swaziland, the UK, and the US for the past few years. He had been getting a degree overseas and was looking for a good place to settle down. He was hoping to start a family and was looking for someone to do that with. When he mentioned his plans to live overseas, most likely in the US, to Shamsun, she said that “as long as it was with a good person,” she was willing to make the move. After meeting each other a few more times and getting engaged, they got married within a year.

Shortly after their marriage, Shamsun found a job and her husband started spending about half of his time in Bangladesh and about half in New York. This continued until Shamsun’s father and her husband’s mother died within a few months of each other. They revisited their plans to settle overseas and, late in 1999, decided to actually do it. Shamsun arrived in New York in 2000. She and her husband settled in the Ditmas Park section of Flatbush, right next to Midwood. When they first settled, the neighborhood had a mostly Jewish and West Indian population. There were also significant Pakistani and Hispanic populations. At this point, Shamsun’s broken English prevented her from really communicating with any of her new neighbors. With fluency only in Bengali, a language that very few of the people in the neighborhood spoke, Shamsun says, “I felt the loneliness pretty quickly. Most of my life in Bangladesh was focused on family. After moving here, I did not really have that anymore.” She had difficulty finding friends and even carrying out daily tasks. This was a stark difference from how she lived in Bangladesh, where she was surrounded by her family and neighbors who respected her and knew her well.

As soon as Shamsun got off the plane at JFK and exited the airport, she realized that she had not come prepared for the weather. “It’s much colder than in Bangladesh so that made it a bit miserable for the first few weeks,” she remembers. The weather and the prison of non-communication made for a terrible introduction to New York. The city was loud and seemed unwelcoming, but after a while, “when it started to snow, everything cleared up. It was my first time seeing it and it made everything look so clean and pretty.” It was experiences like this that made her new life bearable. Eventually, as the weather warmed up, so did her spirits. The first time she went to an American supermarket, she was very impressed by the sheer selection of products and was fascinated by some of the fruits that she had never seen before. In the next few years, Shamsun began to explore her new home and eventually found a few friends who lived nearby. Most of these friends were also Bangladeshi immigrants living in the neighborhood and they were brought together by their ability to talk to each other. She also called back home at least once a week. Especially in the early years, phone calls home, from both her and her husband, were a significant expense. Through these calls, she was able to keep some connection with her family back in Bangladesh. She would hear about weddings, about nieces and nephews being born, and about Eid celebrations but she wouldn’t be there to celebrate with them. The new friends she made were important to her, but they still did not replace the family and the community that she had in Bangladesh.

Shamsun has lived in the same neighborhood that she arrived in for the past two decades. Since 2000, when she first moved here, the population of almost every immigration group had grown. This growth has also changed the overall makeup of the neighborhood. Before, the dominant immigrant groups were Hispanic, Pakistani, and West Indian. Now, the Bangladeshi population has more than doubled and Shamsun has been able to find more friends with a shared cultural background. At the same time, as she has become more comfortable speaking English and become more involved in her daughter’s school, she has made friends outside of her immigrant group. Some of her best friends now are people she met volunteering as an interpreter at her daughter’s school. Shamsun came to New York missing the community she had left behind but has now finally found a new one.