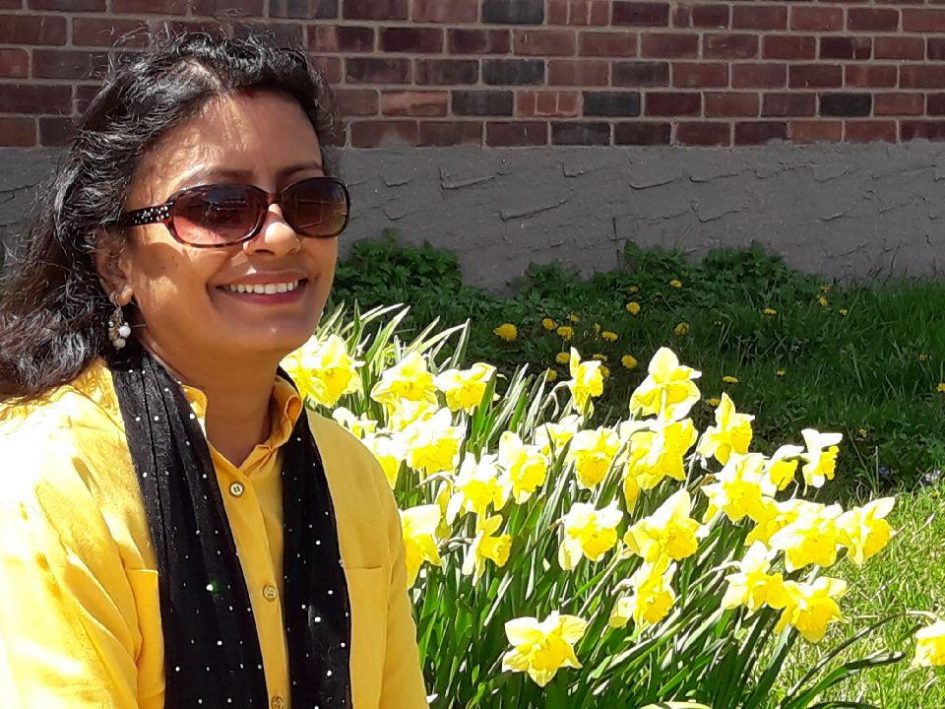 Looking into the future with bright eyes, my mother, Shiuli Saha, decided to apply for the Diversity Visa Program. A practicing doctor in her own private clinic, she felt that she had reached the pinnacle of life in Bangladesh yet yearned for more. After hearing many success stories, watching movies and TV shows about immigrant success, and talking to her family members about how wonderful life must be in a first world country, she decided to emigrate out of Bangladesh and immigrate to the United States of America. Living in Bangladesh, a developing third world country, she viewed the United States as the ultimate land of opportunity and prosperity. She strongly believed that, no matter where one stood on the economic and financial ladder in Bangladesh, he or she would be much more successful in the United States. However, as soon as she stepped foot into New York City, her expectations shattered into reality.

Firstly, she believed that all of New York was filled with beautiful skyscrapers and luscious views that all New Yorkers were entitled to enjoy. However, when her cousin picked her up from the airport and drove her to his home, she became immediately confused. All of the new and tall skyscrapers were disappearing out of view and giving way to old and short buildings. She felt a sense of betrayal as her visions were not lining up with the realities she faced. A former educated, wealthy, and pampered woman immediately transformed into a confused, helpless housewife. In essence, my mom’s life had turned upside down. However, she was willing to brave through it all: all for her children.

Thus, when a Bengali person arrives to the states, he or she is almost always underwhelmed. He or she expects a golden city where the wealthy are seen walking around and living their lives. However, as soon as they step foot into the New World, reality hits them square in the head. The golden city turns into a concrete jungle filled with wandering locals wondering what to do with their lives.

Hence, she applied for the visa lottery. A craze in the early 2000s, Bengalis throughout the country were applying for a system that granted randomly picked individuals a chance to move to a first world country. “We mainly came because of the DV… Diversity Visa Lottery… to get more opportunity in this country, get more Social Security, for better educational opportunities for our children.” However, upon questioning further, she elaborated that she never thought that she would get such an opportunity. Applying for the DV was more of a prayer rather than a guarantee due to the sheer number of applicants who were flocking to the Bangladeshi embassies to apply. So, when she got the call back from the embassy, her whole world turned upside down.

She remembers family flocking into her house day after day congratulating her on her miraculous fortune and wishing her safe travels to the land of opportunity: The United States of America. While it may seem that my mother would have been ecstatic to win a lottery with such slim chances, she was quite the opposite however. Upon asking her what her initial thoughts were after getting the call and her thoughts on her decision after living in the United States for more than ten years, she replied “I did not want to come, but we came for our kids… We came for our children’s sake.” This not only shows the contrast between her and the conventional immigrant, but also shows the complexity of the change she experienced and her attitude towards the new life that she would have to lead.

Centered around the future, her new life was quite different from that in Bangladesh. She arrived in the States with nothing more than a Bangladeshi passport, money, and a will to succeed. As soon as she migrated over to the States, her intellectual knowledge became futile, and all of her medical licenses became worthless. She could not open up a practice nor apply to work at a hospital even though she had all of the knowledge to do so. She quickly felt useless. A mother who had worked her hardest to build a stable base in her home country had left it all in hope of a “better future.”

But, how would this ideal future become reality? In Bangladesh, Shiuli studied in college, then got her medical degree in medical school, which she then used to practice. But, if her college and medical degrees are both invalid here in the United States, then she has no basis to apply to the workforce with; hence, she would need to study it all again. And that she did. “We got a good environment, good schools… we had good opportunities to study for ourselves.” She expanded on how she spent lots of time at the local library studying for the United States Medical Licensing Exam, or USMLE, to try to recreate her old lifestyle in a new land. She met others with dreams similar to hers and detailed their journeys. “One of the people I met a long time ago was a Bengali doctor who had traveled to the United States to take the USMLE and become a doctor here. She was the one who told me that studying is everything here in America, that the only way you can differentiate yourself and get a good job here in New York is by getting degrees and having a good educational background. She is a doctor here now.” She met and studied with this longtime friend initially at the local library. However, there was one huge difference between them two: their age.

Shiuli was in her mid-forties while her friend was in her mid-thirties. Shiuli had two children who went to school every day and needed constant care and attention. Her friend had no children at that moment and did not plan to have any until her future was set. This in itself shows the disparity between the two’s situations. Shiuli’s friend did not have any other major obligations to tend to that would obstruct her from studying and achieving her dreams. However, Shiuli, with young children and a household to take care of, was finding it more and more difficult to study enough and in an efficient manner to attempt to take the USMLE. This eventually took a turn for the worst. “I studied [for the USMLE], but I didn’t have the chance to finish.” A simple sentence indeed, but it reveals much about her perspective and opinion on her situation here in the United States. In Bangladesh, Shiuli was accustomed to living quite a lavish lifestyle. She worked at her clinic for most of the day, then came home to a cooked meal and clean home. But, here in the United States, she did not have a steady job, and spent most of her time cooking meals and cleaning the household. “No, in Bangladesh, we had maids and servants that took care of the household. I used to just work. But here, you have to do everything yourself, and that makes living here tough; there’s no one to help you with anything.” Based on this statement, we can effectively say that her life was turned upside down, and that this transition was very rough on her. She explains how, in Bangladesh, everything was done for her, and now she has to do everything for herself. This not only translated to a shift in her ability to take care of herself, but also a shift in taking care of her family.

“I mean, here it is difficult to maintain the family. You have to do everything with your own hands.” This resulted in many shortcomings and realizations for her. In Bangladesh, as stated before, she would come home every day to a well-maintained household. The maids and servants in her household would make sure that all household tasks were taken care of. Each meal was cooked, the dishes were cleaned, the floors were swept, the beds were made, the furniture was cleaned, the trash was taken out, and the children were nurtured. So, Shiuli did not have anything to worry about. But, without any maids in the States, all to these chores quickly became her responsibility, especially that of nurturing the children and making sure their futures were bright.

As stated before, Shiuli came to the New World “for better opportunity, security, for our children’s studies… for our children’s sake.” So, before long, her life revolved around her children’s. She took her children to school every day, made sure that they were healthy and well fed, and kept track of their intellectual progress. This led to many culture shocks and realizations. While she never thought about heading to the supermarket in Bangladesh, Ctown, Estates Pharmacy, and True Value became the new staples in her life. She also realized the community that was present in the United States. Going to school every day for her kids, Shiuli soon began making friends with similar stories and backgrounds, making her feel more at home. She saw these friends daily and began getting closer and closer to them as time went on. These friends eventually blossomed into a network of associations, as she made more and more friends, and became even more intimate with those she knew. Her social life is filled with birthday parties, school plays, sweet 16 parties, new year’s celebrations, and many more gatherings, all with her strong network. She raved about how she has a great time socializing, confiding in, and relating to the many people that she loves so dearly now. In other words, the acquaintances she made during her initial days are now her portals to her old memories in Bangladesh and her paths to new memories in the United States.

“Nowadays, I like living in New York a lot. Since our home country is so far away, everyone [the Bengali community] becomes closer together”. To an extent, the strength of the bonds between members in this community is stronger than that in Bangladesh. “the [Bengali] community here is much stronger here due to a shared longing for our home country. No one is a relative of ours, but our shared longing for our country creates a strong bond that allows everyone to contact each other whenever they need anything. Now the Bengali community is much more active: everyone wants to do something with someone else, whether it be religious or for a party… that’s why I like it.” While she initially discovered loneliness, from an impossibility to gain her former fortune and a new, overwhelming sense of responsibility, she tackled those adversities by mingling with those around her, creating a strong support group with those who flourished from similar circumstances, and, in the end, maintained a strong, positive outlook. “Overall, I like New York very much, but at times, I feel lonely. I miss my home country and all of the people there. I feel that if I take trips there from time to time, I will enjoy myself a little more, as I will be living my new life, yet not fully letting go of my old life.”