Malin Landaeus, the name-sake of the vintage boutique, quickly came off as one of the most, if not most, genuine, organic, and spiritual people I have ever encountered. Her responses are a reflection of this.

Originally from London, Sweden, Malin humorously recounted of moving to New York because of a relationship. To make it in this new society, Malin began selling out of her wardrobe at flea markets and such. After a few successful years of selling and making connections, she secured her current location at 155 N. 6th Street.

When asked about what she thinks of the word “hipster”, Malin explained, “people are entitled to what they like to think…I don’t want to group people…we all play roles and have different functions…if it takes off and becomes hipster, its not our business.” 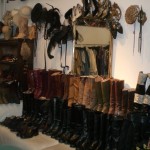 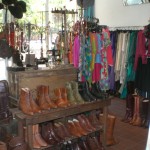 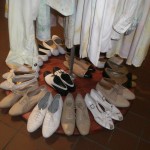 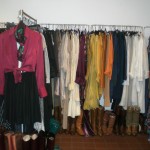 Everything is Malin Landaeus is vintage and curated. Malin revealed that she works with collections and “[travels] around and [collects] these pieces.” My favorite thing that she said was “every piece in here is a piece of love”. Malin took a political stance, explaining that “there’s so much produced in the world and I don’t think we need to produce more.”

The customer base at Malin Landaeus can best be described as “lovely people” from all over. While there is a high percentage of fashionable people, there are also many tourists to balance it out. Malin modestly told me that her customers have told her she has the best collection in NY.

When asked about the Hasidic enclave’s fashion, Malin said that she loves it in that everything is so uniform, yet there is still room for some creativity. For example, she says that Jewish women frequently go to her boutique to browse for hats. She explained that although she does not feel there is tension, “they [the Hasids]don’t really see us as someone they want to engage with…not because of they way we’re dressed,” but because of a “more spiritual” reason.

Upon entering this store, we got a friendlier and more personable vibe (the employees actually approached us). There was only customer in there, who was working with the employee to try to figure out an outfit for herself. We looked around a bit, and realized that out of all the stores we visited this one and Malin Landaeus were the most high-end.

Moving on, there were two employees conversing over the jewelry case, one of them being Arielle, who we interviewed. Arielle has been a Williamsburg resident for the past year only. She had majored in costume studies, but found career options to be limited straight of out college, so she was another artist working at a fashion boutique as a means to get by. When we asked her what she thought of the term “hipsters”, she initially said she was “ambivalent” about it, but then admitted to the term to being “annoying”. While she noted that some of her friends definitely fit into that category, she felt that some people would also characterize her as one (we didn’t). Arielle characterized hipsters specifically by the items of clothing’s they chose to wear, such as “caps, old concert tees, skinny jeans, laced up boots and anything vintage.”

Arielle deemed Amaricord Vintage Fashion to be a “40’s to modern cutting edge vintage, that incorporates modern trends.” She said the main clientele of the store were “post grads, college students, artists, musicians, tourists and celebrities.” However she was rather hesitant in revealing who the celebrities were, and she did not allow us to take any pictures of the store either because she was not sure if her boss would approve.

Regarding the neighboring Hasidic Jew enclave, she said she simply felt no tension. However, she did feel as if real estate-wise, the prices were being raised up and that could affect the Hasidic Jewish enclave’s existence.

We saw ID from afar, and saw that it was bustling with male shoppers. ID was the first male clothing store we had encountered, and it seemed to be doing well. We later learned from their website that it is the only male boutique in Brooklyn. In the past, when the stores were rather busy, the owner refused an interview, but Chimmey kindly took the time to answer our questions between transactions. Right off the bat, Chimmey told us she didn’t think she would be much help, and that explained why she was very blunt and curt with her answers. Chimney was Tibetan and from Queens. She had opened a store up in Queens, and after having success she expanded into Williamsburg, because of the high demand of fashion boutiques.

Regarding the term “hipster,” she said it “describes it really well to the point.” She wasn’t offended at all, and that’s why we came to the conclusion that only residents of Williamsburg find that term demeaning, because they feel that term comes with negative connotations.

Chimney never really ventured out into the hipster area, so she had never visited the Hasidic Jewish area, nor was she really aware of it. However, a key thing to note was that Chimney was Tibetan, and so were a few other storeowners. Directly across the street, Pema, owned a store from the same family as ID, and she was also Tibetan. We went ahead and assumed the owners were related. They seem to dominate a few of the stores there.

As soon as we entered Red Pearl, we got that “sweet” vibe, because everything was rather pink, cute and girly. The store was the thorough one. It included a variety of things, including flowing dresses, lacy lingerie, books, toys for babies, candles, jewelry, crafts, and more. Many of the items were described as “gift items”.

Deborah, a middle-aged employee, was only one working when we visited. She had recently moved from Seattle to Williamsburg, and started working at this store for the same reason that Arielle is working at Amarcord. Deborah’s ultimate goal was to be a successful artist. She described the Red Pearl’s clientele as a mix of people but mainly “a lot of European tourists, and a lot of families that are looking for gifts.”

As soon as we mentioned the term “hipster”, Deborah rolled her eyes and described that she found the term to be very “derogatory” because it a term that people use “to make fun of people like her.” However she did feel that the term does classify a specific fashion style that involves “shirts, tights and summery shimmery dresses.” Deborah was aware of the Hasidic Jewish enclave, but never really “ventured out there” because she felt as if it was a very “exclusive area” and she “felt out of place.” However, she does feel as if there is some tension regarding the narrow boundary in the area of Williamsburg. Overall, she believes that Williamsburg is a great place for small businesses, because it attracts people from all over the world. Deborah specifically said that the “aura of Williamsburg is spreading all around,” which goes in accord to the high number of tourists there. She also notes that a lot of the buildings are owned by the Jews from the nearby enclave, so along with the small businesses thriving, so are the property owners.

This store was located not on Bedford Ave, but rather on a side street. It caught our eye, because unlike the other stores, its products were of Tibetan origin, and not exactly the typical vintage and rustic clothes most of the other clothing stores offered.

Upon entering Mandala, we found even more unique pieces, such as about this store was that it was filled ethnic Tibetan clothes, jewelry and even furniture. Sitting behind the cash register was Tsering, a very young girl, who was the daughter of the owners of this store. Her family and her moved from Nepal 10 years go and have lived in Williamsburg since. They originally opened a store in St. Marks (Lower East Side), and because they felt that the customers there were similar to those of Williamsburg, they decided to open up a second store.Mandala sells mainly sell imported ethnic items from Nepal, India and Tibet and their frequent shoppers are “Buddhists, tourists and people who are into yoga”.

When asked about the term “hipsters,” Tsering was indifferent, and actually felt that even though these “hipster’s think they’re unique, they actually have very repetitive outfits”. She also mentioned that she believes restaurants dominate the industry of Williamsburg.