There are several beautiful bridges in New York City. The Brooklyn Bridge is one of the most famous bridges in the world.The Verrazano Bridge is one of the longest suspension bridges in the world. However, there is one bridge on the upper west side of Manhattan that does not get as much recognition. This bridge is the only bridge in the city that connects New York to another State. This bridge is the George Washington Bridge and it has a very interesting history.

Construction on the George Washington Bridge started in 1927. The Bridge was designed by Othmar Ammann, a swiss architect. When Ammann came over to the states he started working with Gustav Lindenthal, a famous bridge architect. Lindenthal wanted to build a bridge that connected New York and New Jersey but his vision was too complex; he wanted the bridge to carry several railroad tracks as well as a pedestrian walkway. Lindenthal’s idea was too ambitious and expensive. Ammann thought the bridge should be simple and submitted a design to the Port of New York Authority and it was eventually chosen.

The Bridge was constructed in several phases. Construction workers first built the two towers of the bridge. Next the workers strung the main cables over the towers from both sides of the shore. Workers then hung steel suspenders from the cables, which would support the roadway. The last step was to build the roadway and hang it from the suspenders. Ammann designed the two towers to be covered in granite but it was eventually decided that it was best to leave the steel frames bare because it would cost too much money and the country was in the Great Depression.

After four years of hard work, the George Washington Bridge was inaugurated and opened to the public on October 25, 1931. 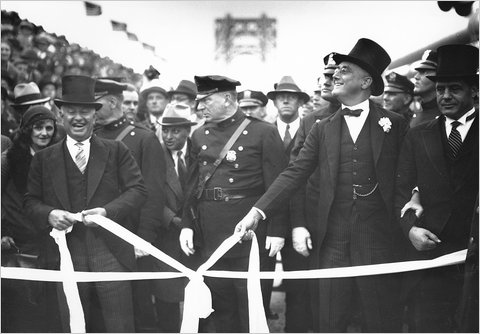 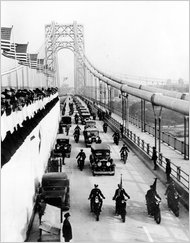 In its first full year of operation, the bridge served more than 5.5 million vehicles. At the time, the bridge had the longest center span in the world.

The George Washington Bridge will turn 81 years old this year. The biggest difference between the bridge now and when it first opened is the lower deck that was added in 1962.

With old age comes a lot of wear and tear so the George Washington Bridge is need of some repairs. In December 2011, the Port Authority authorized $15.5 million in repairs which will eventually rise to $1 billion. The biggest part of the repairs will be replacing the 592 vertical suspenders of the bridge. While the bridge is not in danger of collapse, most bridges need to get their suspenders replaced every 70 years so the port authority decided it was best to start the process now rather than at a time when it is critical and would cause lane closures. This process will take a long time because no more than three suspenders can be removed at a time or the bridge will destabilize. The suspenders will be replaced using a system that was used on the Golden Gate Bridge. A rolling platform will be placed on the main cables and workers will work from above to replace the suspenders. The restoration will also include cleaning the anchors that tie down the two towers, replacing broken wires in cables, and replacing dehumidifiers in the chambers of the anchors. The main cables of the bridge will also be cleaned by workers. The whole restoration is expected to take eight years and create 3,600 jobs. The George Washington Bridge in the Evening. Photo by Semyon Toybis

This renovation deal is huge for the Washington Heights Community. Not only will the renovation bring jobs to the community, but the opening of new stores in the retail areas of the station will improve the local economy as well. SJM plans to lease a 25,000 square foot retail area to a supermarket, a 25,000 square foot retail area to a women’s clothing store, and a 20,000 square foot retail area to a fitness center. Other businesses will also be interested in setting up shop at this station because the station is exempt from property taxes because it is a public building and because it is located in a low income area. These stores will provide places to shop not only for Washington Heights residents, but also for residents of New Jersey who commute across the bridge to their workplaces in Washington Heights, such as the employees of the Columbia University Medical Center and NewYork-Presbyterian hospital.

5 thoughts on “George Washington Bridge Then and Now”