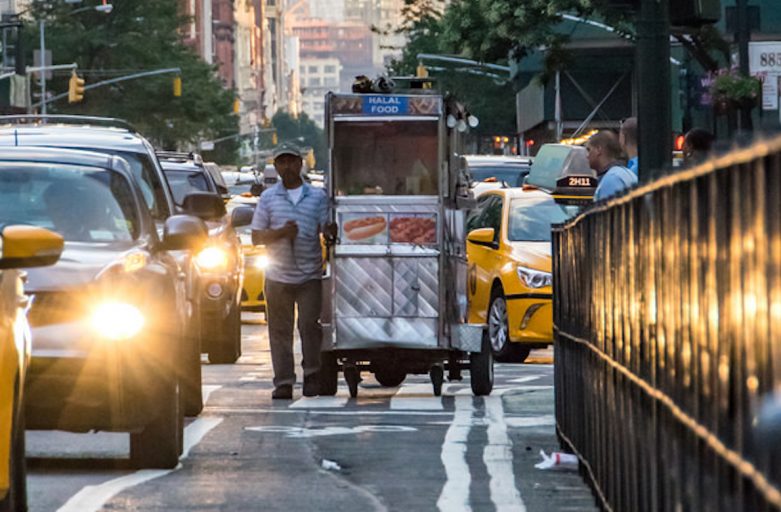 The permit system that New York City uses to allocate space to vendors causes a ton of problems. Probably the biggest problem is the black market for permits that was created as a result

History of the Permit System

The permit system in place now was created in the 1980s. Prior to this time, anyone was able to sell on the streets. In the 1980s New York mayor Ed Koch became fed up with the carts and peddlers on the street. He told the New York Times about the crowded streets, “This is not supposed to look like a souk.” A souk is a marketplace found in Middle Eastern countries. This animosity was also a result of pressure from traditional brick and mortar stores who despised the carts. They disliked the carts due to them taking away their business without the traditional expenses like rent and payroll. In 1981. Koch decided to limit the number of people who can sell on the streets to around 4,000. Only 3,000 full-time permits would be sold with 1,000 more on a part-time basis. In the 1990’s Mayor Rudy Giuliani made the rules even stricter. He set up many rules and regulations regarding where the carts can be set up, as well as additional rules about where a cart has to be stored and hygiene which would be enforced by the NYPD.

Nowadays, most of the rules and regulations have remained the same. The number of permits being sold also remained the same at around 4,000. The way the rules work is that once you had a permit you can renew it every two years by paying a fee of $200. As a result, most people who bought the permits in the 1980s still hold on to them today.  Only around 50 spots open up on a yearly basis. There is such a high demand for these permits that there is a waiting list with almost 1,700 people on it. This is where the black market was formed. With such a high demand for these permits, prospective cart owners have to pay anywhere from $10,000 to $25,000 a year to rent a permit from someone who already has one. This is despite the fact that renting a permit is illegal. As it says in the city code in Section 17-314.1 (b) of the code reads: “No vehicle or pushcart used to vend food in a public place shall be assignable or transferable with a license, permit or plate that has been issued under this subchapter attached there to.” The other choice for these food cart owners is to sell without the permits, but they could be faced with hefty fines. Without any other option, it has been estimated that between 70% and 80% of the permits are being illegally rented out to prospective cart owners. These people who own the permit are illegally making thousands of dollars as a result of this system. While vendors are stuck paying thousands more than what the city would charge them.

The black market works as a capitalistic system would. In a theoretical sense, supply and demand dictate the price of what the permits cost. With such a high demand for these permits permit owners can charge thousands to prospective owners. This illegal market causes problems for the city as well. They are essentially selling real estate below what the free market price would be. The City is losing what could potentially be thousands of dollars by not selling at the market price.

The people who get most affected are the immigrants who have to pay illegally for the permits. The Wall Street Journal interviewed a man named Mohamed Meah, an immigrant from Bangladesh, who has been running a cart for 17 years. He pays $12,000 dollars for his permit. He only makes $150 dollars a day which makes supporting his family very difficult. Mohamed’s story is one that is affecting thousands of other hard working cart owners who have to pay such an exuberant amount of money that they shouldn’t have to.

Jeff Koyan of Crain’s New York did a great investigative piece on this topic. He wanted to find out what is the process of getting a permit was like. He was referred to Astoria, Queens, by an Egyptian man named Zizo, as the place where the permit brokers could be found. He was able to speak to a man named Mr. Singh who was willing to sell him the permit and a cart for $18,000. From what he saw an evil mastermind didn’t own all the permits. He found that average people are selling their permits via text or craigslist.

Future of the Permit System

There has been a lot of talk in New York about reforming the food cart laws. One thing they have done is trying to implement letter grades on each of the carts. This would help weed out some of the illegal owners.

One long term solution being suggested is that the City should auction off the permits. This would bring in millions of dollars of lost revenue for the City. Although, this would also have its problems with the permits going to the people with the most money. While the cart owners will still have to pay a high fee for their permits. Another suggestion is that the city should increase the number of permits being sold. Would this completely solve the problem? That’s a tough question to ask. What we do know is that there needs to be some reform. Everyone is losing. The City is losing money, and most importantly, people who want to work hard are stuck doing so in a system slanted against them.

5 thoughts on “The Black Market”

Read other posts from: