How Did Times Square Become a Pedestrian Plaza?

Times Square encompassed the “Bow Tie” of Midtown. This refers to 41st to 47th Street, along Broadway and Seventh Avenue. From above, as Broadway cuts across Seventh and continues it’s trip North now on the opposite side of the avenue, these few blocks form what looks like a giant bow tie. 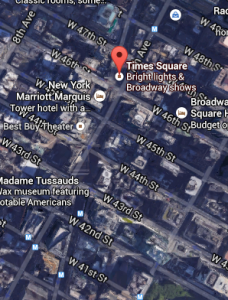 Time Square was originally called Longacre Square. It was renamed in April 1904 after The New York Times relocated to the Times Building, which stands on 8th Avenue between 40th and 41st Street. Today, brightly adorned with billboards and advertisements, Times Square is sometimes referred to as The Crossroads of the World,  The Center of the Universe, and the Heart of the Great White Way.

As a historical and widely popular destination for residents and tourists alike, Times Square attracts millions a visitors a day. With an abundance of shops, Broadway and Off-Broadway performances, noteworthy restaurants, and the magnificent “light show”, via the infamous  giant billboards, crowds constantly swarm the area to experience it all. Perhaps something needed to be done to alleviate all the vehicular traffic and diffuse the herds of people.

In February 2009, Mayor Michael Bloomberg announced that traffic lanes along Broadway from 42nd to 47th Street would be transformed into pedestrian plazas starting Memorial Day until at least the end of the year as a trial. Thus that summer, the NYC Department of Transportation converted  the five blocks of Broadway from a traffic thoroughfare (a road or path forming a route between two places) into a series of street-less so-called “pedestrian plazas”. The project was called Green Light for Midtown. This attempt to rationalize the West Side traffic grid and relieve pedestrian congestion on New York’s most crowded sidewalks turned out to be a success. As a result, injuries to motorists and pedestrians alike decreased, with fewer pedestrians walking in the road. The number of pedestrians in Times Square also increased. In February 2010, Bloomberg announced that the pedestrian plazas would become permanent.

Still, by simply eliminating streets, was Times Square truly as accommodating to pedestrians as it could be? What if they wanted to sit down and take in their surroundings? Where could they loiter or take a minute to relax? In 2011 The Departments of Transportation and Design & Construction together with the Times Square Alliance put forth a new design to improve the Times Square Bow Tie. The goal was to create a world-class public space, making it even more pedestrian-friendly. The design was created by an architectural team from the firm Snohetta. It was approved by the city in 2012. 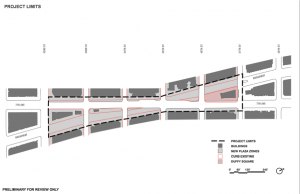 This is a diagram of the project proposal.

One of the basic changes made to Time Square was the unifying the streets and sidewalk by leveling out the curb. Even though there were no longer cars allowed on the five blocks along Broadway, people were hesitate to walk or linger there because they still had the appearance of streets. By leveling out the curb, in addition to painting them a maroon color instead of the previous black asphalt, the Time Square pedestrian plaza become much more inviting. In addition,  chairs, tables, and benches were installed so that pedestrians may sit, hang out, or snack. 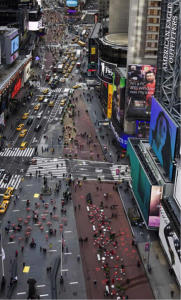 On top of these changes, Duffy Square had recently been renovated in 2008. Duffy Square is located at the northern triangle of Times Square, between 45th and 47th Street, Broadway and Seventh Avenue. Well known as the location for TKTS, a booth that sells tickets for Broadway and Off-Broadway shows, music, and dance events for reduced-price, the Theatre Development Fund (TDF) and the Van Alen Institute held an international competition for a new design for Duffy Square. The winning concept, by John Choi and Tai Ropiha of Australia, now stands at the heart of Time Square. 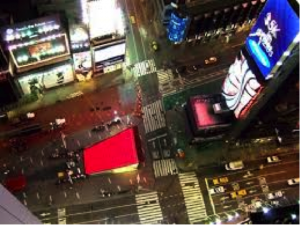 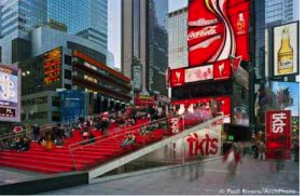 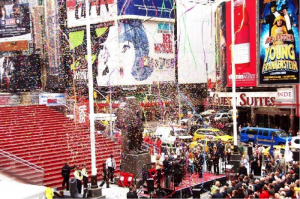 This new and improved pedestrian plaza, with an amazingly revamped Duffy Square, made Times Square much more hospitable to the crowds of visitors arriving daily to gawk at the amazing spectacles present. Finally, Times Square has recently made strides to become more eco-friendly. As of 2015 the Broadway Green Alliance changed all of the lights on Broadway to energy-efficient LEDs and CFLs (compact fluorescent lamps), which use about 70% less energy than incandescent bulbs. They also encourage all Broadway shows to use rechargeable batteries in microphones and flashlights, keeping thousands of toxic disposable batteries from the waste stream every month. In addition, Broadway shows are now washing costumes in energy efficient washers that save enough energy to light the outside lights for nearly two months. The Alliance also holds free electronic-waste and textile recycling events four times a year right in Times Square.