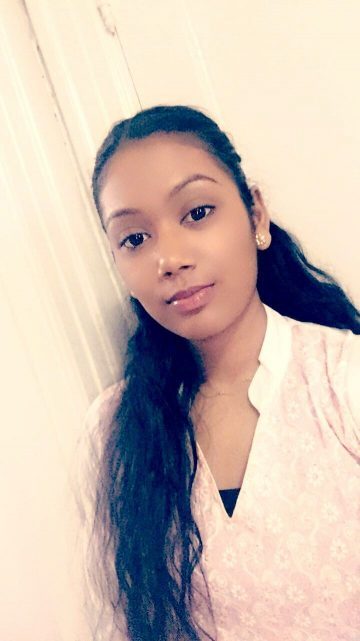 In Queens, there is a neighborhood consisting of a small ethnic enclave of West Indians, more specifically Indo-Caribbean Guyanese and Trinidadian people. This neighborhood is South Richmond Hill, which also spreads into parts of Ozone Park. Guyana is a country in South America and Trinidad is an island in the Caribbean not too far from Guyana. All around the

neighborhood there are multiple shops selling ethnic products from these countries. Roti shops and stores selling sarees and other ethnic clothing can be found on every block. There are open food markets selling vegetables and meat from their country and mandirs, which are Hindu temples, everywhere. It is often called “Little Guyana” because of the concentration of Guyanese people and businesses in the area. Yogini is one of the many residents of South Richmond Hill. She is an 18-year-old girl who moved there just a few years back. She lives with her mother, father, and younger sister.

Back when Yogini was a toddler, she was living in Guyana in a rural area. Her family business consisted of farming. She says, “It’s sorta funny, I remember the animals, like I remember we had a lot of sheep and a parrot.” She also remembers gathering flowers for the altar in her house. She spent her days bouncing from house to house visiting family and friends who lived nearby. Despite being so young, she had the freedom to go wherever she wanted. She said, “I was all over the place, because I could stay with anybody” since there was always someone to look out for her in the neighborhood. When Yogini was three years old her parents made the decision to come to the United States of America. Like many other people, they saw America as a land of opportunity and wanted a better life for their daughter. They came to America with the help of her grandmother, her aunt, and her uncle who sponsored them. Next thing she knew she was on her way to a strange, new land.

Upon arriving in the United States, she remembers, “I lived with my aunt and uncle in the Bronx.” Her aunt and uncle were a great support for them because they helped her father find a job. In terms of her aunt, she says, “My aunt would always take my mom and go shopping with her in the beginning to just like show her how the currency works over here. It was more about us exploring and starting to understand the difference because we came from a pretty rural area to a busy area. It took some time to adjust.” They also helped her family adjust to meeting people of many different ethnicities and backgrounds and to the new technology in this country. One distinct memory she has is of going on an escalator for the first time. She says, “I remember the first time I went to the mall with my aunt and I was just like oh my gosh, this is an escalator, what? What is this?” Like many people who have never encountered an escalator before, she was afraid. However, her aunt held her hand and led her onto it.

They stayed with her aunt and uncle until her father was able to save up enough money. After that, they moved to a cramped apartment in another part of the Bronx. She remembers “It was a basement. It was really underground.” By then, her sister was born. Her family of now four was sharing one bedroom, where she shared a bunkbed with her sister. The neighborhood wasn’t the greatest and they lived there as she went through preschool and kindergarten. Because of the conditions they were living in, she remembers it as one of her least favorite places in New York City.

Afterwards, they moved to Brooklyn and lived with some other family, then moved into the basement of their building. They finally settled into an apartment next door. Brooklyn is where she holds her fondest memories of New York City. She had her cousins close by, which was important for her because cousins are seen as another set of brothers and sisters in her culture. Her apartment in Brooklyn was the first time that America started to feel like home to her. Before then, she had thought this situation was temporary and thought she would be going back to Guyana eventually. During the years she spent in Brooklyn, she ended up discovering her favorite place in New York City, being none other than Central Park. Around the 4th grade or so,s he went with her family to Central Park. She said, “This was the first time we went to Central Park. There was like the little bridge and where the ducks are, I was just feeding the ducks. Then we took pictures by the rocks. It was a nice day.” When asked if she ever got to go back, she responded “No. My dad just got busy with work and then my mom started working and we just never got back the time.”

Living in Brooklyn let her family begin to find a community. Before, all she knew was her family. They found a broader community in religion. They practice Hinduism, mainly practiced by people of South Asian descent and one of the more prominent religions in Guyana. When she was around 7 to 8 years old, her family began attending a Guyanese mandir in Brooklyn. Here it was easier for them to connect with people because they found “other people that looked like [them].” It was especially helpful for her father. Yogini said “My dad really struggled over here. He didn’t like it, he wanted to go back. He was happy at temple, it made him feel like he was at home.” Through religion, the United States began to seem less foreign to them and let them make connections in their community. They lived in Brooklyn until around two years after Yogini started going to high school in Manhattan and then her family decided to shift to South Richmond Hill in Queens.

For her, South Richmond Hill is the place that relates the most to Guyana. She wasn’t unfamiliar with the neighborhood because she would often go there for shopping and to visit family who lived there. It has strong ethnic ties because it is a hub for people from her country and people of her religion. Here, she found “a vibrant community” of people with similar stories to hers and people who shared her culture. In Yogini’s words, she described her neighborhood by claiming “There’s always Soca or Bollywood music being played as cars drive by” and “There’s a temple or church on every block.” This is a testament to the two main religions of Guyana, which are Hinduism and Christianity. The music heard is a mix of music from India, where most of the community originates from, and music from the Caribbean since Guyana is part of the West Indies. There are tons of West Indian stores selling ethnic items and spices littered around Liberty Avenue, the main street of the community. It is always crowded and shopping is always going on.

Despite this being representative of Yogini’s home country of Guyana, she feels that this type of community is rare across America. To her, “West Indian people are a minority in America” and because of the culture, it doesn’t really fit in America. The West Indian culture has strong ties to their roots and has not been subjected to Americanization. Yogini summed up the perfect way to describe this culture and how South Richmond Hill is by saying “Obviously you have major food franchises, like McDonald’s, but there’s not a lot. Everywhere I turn I see a shalwar store, like I don’t see an American clothes store like Hollister… there’s a roti shop, roti shop, roti shop, and then another roti shop, and that’s it.” Shalwars are an example of ethnic clothing and roti is a type of bread eaten in the West Indies. There are little to none American chains present in the neighborhood. To her, South Richmond Hill can’t fit anywhere else because she says it’s like “we made our home here.”

This makes New York City a special place for being able to foster this type of community because it is one of a kind. There’s not really any place like it anywhere else, which is why many people of Guyanese and/or West Indian origin, like Yogini’s family, come to South Richmond Hill to find their beginning to life in America. Yogini stated from her experience that a downside to New York City is that “It’s just really hard to rent or buy a house. It’s just hard to settle, settle down. Even though we’ve been here for so long it’s like we’re in a constant cycle of moving around or changing apartments.” Despite this, she definitely feels like there is a future for her here because of the support from her community. Although she was born in Guyana, she finds that her roots are really settled here and she has found her place.

In terms of her goals, she said “My goal is to become a doctor, and one thing that I’ve always thought back to is going back [to Guyana] for half a year or a couple months, just to give back.” For her, New York City gives her the tools to accomplish her dreams and go back to the country she came from and give back to the community that wouldn’t have had the resources to help her achieve her goals, had her family decided to stay 15 years ago. She remains optimistic about the conditions of life in the city and hopes to continue to thrive. For her, New York is “[her] friends and family that [she] made and [has] over here because they make it home.”