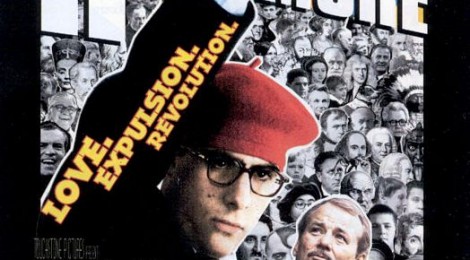 This 1998 film, directed by Wes Anderson, focuses on a particularly ambitious child who refuses to let anything stop him from achieving his goals. This movie will grip you within the first 5 minutes of the film and will keep you hanging until the very end, when you find yourself asking for more.

Max Fischer attends the prestigious high school “Rushmore”, where he begins creating dozens of excellent extracurricular activities. Unfortunately, as he focuses too hard on his extracurricular activities, he allows his grades to drop to disastrous levels. He receives consolation from a new teacher named Ms. Cross and eventually falls in love with her. His best friend, the rich industrialist (and an adult) Herman Blume, also falls in love with her however, and both try desperately to win her affection.

Max is one of the most interesting characters. He refuses to be stalled and comes up with solutions on the spot to keep him heading toward his goal. Sometimes, Max does some really stupid things, but that is when you truly see his emotions. When Ms. Cross introduced Max to a male friend, Max immediately hates the man out of mere jealousy and constantly makes fun of Ms. Cross’ friend in a very childish manner, which is unusual for Max since he almost always acts like an adult. Max always is prepared for everything, offering food and drink before discussing anything. Also, he wears the same uniform every time that he is in school and never changes his haircut. Max may be annoying and frustrating at times when he acts like a selfish, self-centered child, but still the audience will cheer for him. In fact, Max manages to gain influence and respect from every character, even the principal, for although he hates Max for making his life difficult all the time, he still finds himself helping Max with activities.

Herman is also a very amusing character because of his inner personality.  While Max acts like an adult, Herman acts like a child much of the time, especially when he is around Ms. Cross. Herman has two disrespectful sons and a wife who flirts with other men, so when he meets Max, he immediately takes a liking to his ambitious attitude. However, both have eyes for Ms. Cross and both try to woo her. While Max tries to engage her in an adult manner, Herman hides behind trees and watches her from afar, like a little kid. This whole childlike mannerism continues when Max and Herman later exact revenge on one another; Herman’s actions of revenge are so unbelievably childish that it can hardly be believed that an adult is responsible for half of the tactics!

One more character that I would like to call attention to is Dirk. As a sidekick to Max, he is obviously tread on by other boys simply because he is like a lackey. However, since Dirk sees Max as a true friend, he still helps Max. Yet, when Max betrays Dirk, the retaliation is harsh and cruel. Dirk is a interesting character mostly because of his mannerisms. For example, even though he acts mature for his age and is very intelligent, he still writes his notes using a crayon. Not only that, but when Dirk and his young friends retaliate, they wear wizard robes and masks and throw things, very much the kind of thing little children would do. Dirk is like a younger brother who, while trying to act mature, always return to his childlike manner (similar to Max).

So many things in this movie screamed “this was made by Wes Anderson!”  The style of music is folk, which is usually the type of music Anderson plays within his movies. Also, “Rushmore” had title cards explaining either time passing or a new chapter in the story, which is an Anderson style of filming. Lastly, each character has a particular mannerism that can be seen throughout the play.  All of these things made “Rushmore” all the more enjoyable. “Rushmore” felt more like a play rather than a movie, which is clever for Anderson to do for Max loves to write and conduct plays. The panning shots were excellent as was the slow motion ending, which made the whole story magical.

There seem to be several themes playing in “Rushmore”. There is a theme of immaturity and love, about how when a child loves someone and an adult loves someone, their actions to winning their love is actually not so different. This can be seen with Max and Herman and their love for Ms. Cross. There is also a message about ambition, about how if you try too hard to grasp something out of your reach, you will fall hard. This can be seen with Max, for he constantly tries to reach his ambitious goals no matter what barrier he crosses until he falls and everything he has done collapses and turn to rubble. Sometimes, the hurt of giving up a goal is less painful than the hurt of constantly trying to reach that goal. This is what the whole movie is about, and each character creates this message in the end.